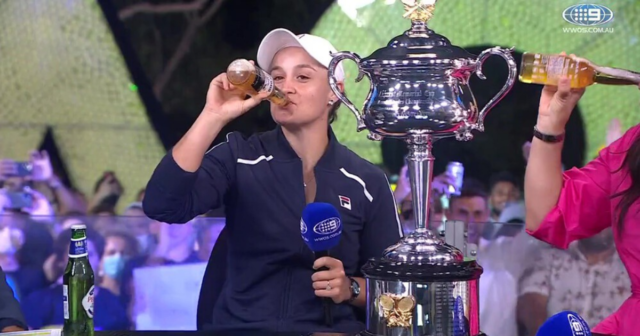 The Aussie hero, 25, promised on Thursday to wait until after the final before sinking a lager. 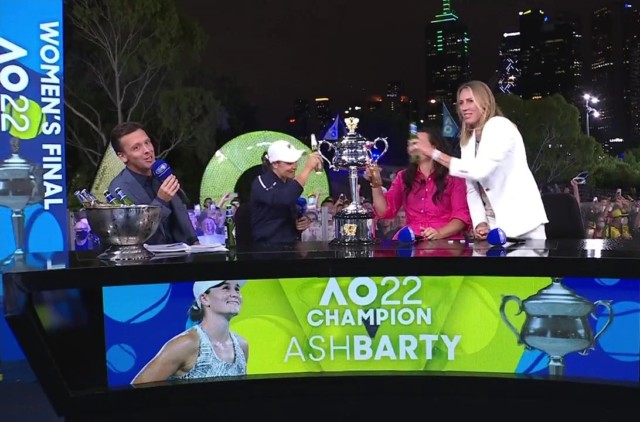 Asked if she was going to enjoy a few cheeky beers after her semi-final win, Barty replied: “I’d love to say yes but I am the ultimate professional.

“I won’t do that. I will save those for when we can celebrate afterwards.

“We can celebrate the journey we have been on and I cannot wait.”

And after beating Danielle Collins 6-3 7-6 at her home Grand Slam to lift the crown, she stuck to her word.

Barty headed into the Channel 9 studio at Melbourne Park to do media after getting her hands on the Daphne Akhurst Memorial Cup.

She was offered a bottle of Corona and duly accepted before insisting she’s ‘not drinking alone’.

So she was joined by close pal and tennis doubles partner Casey Dellacqua in enjoying her first celebratory bottle.

Barty added: “Case changed my life. She brought me into this sport again and allowed me to grow as a person. I love her.”

The world No1 was famously spotted with a pint in hand at an Aussie Rules match in 2020 as she skipped her defence of the French Open during lockdown.

She made a beeline for Dellacqua after wrapping up the victory on Rod Laver Arena and enjoyed a special embrace before kissing her on the forehead in a touching gesture.

The popular Queenslander staged an almighty comeback from 5-1 down in the second before playing a perfect tie-break to become the first Aussie winner of the women’s singles at the Oz Open since Chris O’Neil in 1978.

Emotional Barty, who has indigenous roots, was handed the trophy by her idol Evonne Goolagong.

After winning her third major, the former Big Bash cricketer said: “This crowd is the most fun I have played in front of. You all relaxed me, forced me to play my best tennis, and I had to bring that against Danielle.

“Thank you for all your love these last few weeks. I’m so proud to be an Aussie.

“To my team, wow, I have said numerous times that I am so lucky to have so many people that love and support me.

“It’s pretty bloody special that my mum and dad can come down today.

“I’m incredibly fortunate and a lucky girl to have love in my corner. I love you to all death.” 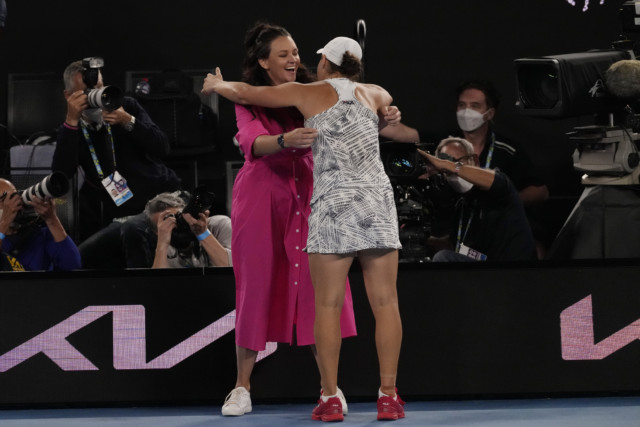 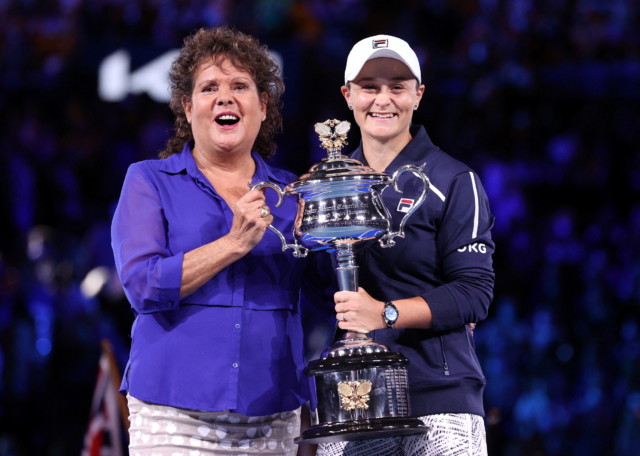 She was handed the trophy by idol Evonne Goolagong
Advertisement. Scroll to continue reading.
In this article:Australian open, French Open