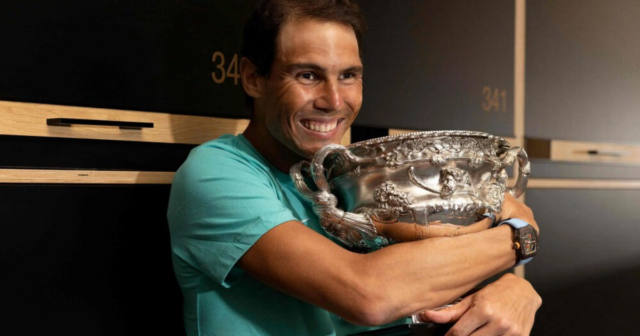 Rafael Nadal was called an ‘enemy of the state’ by ex-Barcelona Foundation vice-president Alfons Godall, leading to his resignationJoan Laporta, pictured, revealed Godall had left his role ‘voluntarily’ to protect Barcelona and the club’s foundation

But in a bizarre attack, Godall called Real Madrid fan Nadal an ‘enemy of the state’.

Taking to Twitter, Godall wrote: “Rafael Navidad has made me uncomfortable from day one.

“I have him in the same group as La Roja, Real Madrid, Alonso and everything that represents the enemy state.”

Following a backlash from Barcelona investors and sponsors, as well as fans, Godall promptly shared another tweet to reveal he would be stepping down from his role.

He confirmed: “The tweet with my opinion about a famous person and his profile can harm the Barca Foundation due to pressure from some companies and the media.

“I don’t want to cost FC Barcelona a penny or give up my freedom of expression.

“Consequently, I resign from the position. Thank you!”

Barcelona president, Joan Laporta, has since addressed the issue – insisting Godall leaving his post was ‘voluntary’.

Laporta claimed: “He considered that given there had been complaints from employers, investors and sponsors of the Foundation due to a tweet he wrote, he did not want to harm the Foundation and has decided to resign voluntarily.

“The decision has been respected and that’s it.”

Laporta went on to congratulate Nadal for his record-breaking achievement, before joking: “The pity is that he is not from Barca…

“But we forgive him because he makes us enjoy his tennis.”