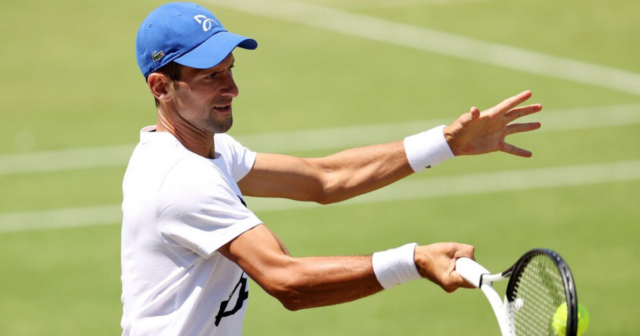 NOVAK DJOKOVIC has warned Nick Kyrgios that whoever keeps their cool will be crowned Wimbledon champion.

The Serbian, 35, has predicted “fireworks” as the pair battle for the title and £2milllion prize money as the temperatures tomorrow top 29C.

Both players are not afraid to show their emotions on a tennis court and the Centre Court crowd could play a role with their reactions.

Djokovic, going for four Championships in a row, said: “I guess it’s going to be a game of small margins.

“I hope I can be at the desired level, then really it’s a mental game in the end, who stays tougher and calmer in the decisive moments.

“It’s going to be an interesting match.”

Kyrgios has had a “crazy” fortnight in which he has been fined for SPITTING at Wimbledon fans, insulting line judges and arguing with the umpire.

There was also the summons to appear before an Australian court to hear common assault allegations made by an ex-girlfriend which dropped on Tuesday.

He is just the fourth Australian man in the singles final this century and it is 20 years since fellow countryman Lleyton Hewitt beat David Nalbandian to rule the lawns.

Now the Davis Cup captain, Hewitt, 41, is a close ally of Kyrgios and tipped the Canberra star to cope with the mayhem of being in a major final.

He said: “Nick can play with chaos going on. Not many people can, but he can.

“We’ve seen at the Australian Open in the doubles when it was a big scene like that – and that is when he plays his best tennis. His opponents have to be prepared for that.”

Kyrgios, 27, has won both of his past two meetings with Djokovic back in 2017 and the unseeded ace will bring a box of tricks to proceedings.

Djokovic said: “It’s tough to read his serve. I haven’t practised with him or played with him since the last time I lost to him.

“On grass I would assume it’s even tougher to read his serve and to return because he has so many free points.

“You could see that throughout this tournament as well.

“He just puts additional pressure on your serve. He moves well. He’s got great hands. So a very complete player.”