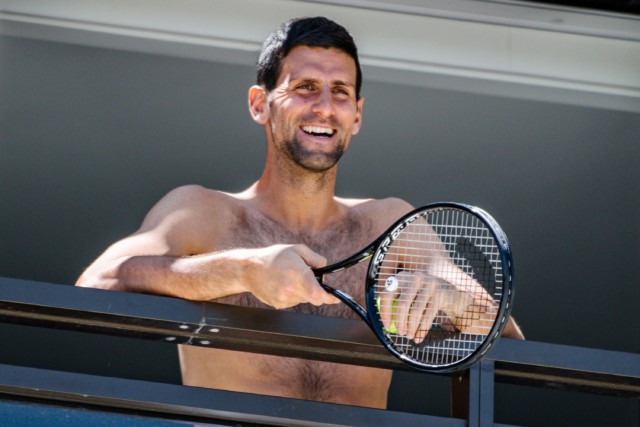 NOVAK DJOKOVIC released a 636-word statement on social media after being called out for his Australian Open demands.

The Serb has faced a backlash for his views on Australia’s strict quarantine requirements – with fellow pro Nick Kyrgios branding him ‘a tool’.

The world’s best tennis players descended Down Under for the first grand slam of the season starting on February 8.

But 72 of them have been locked in Melbourne hotel rooms for 14 days and resorted to hitting balls against walls and exercising in that space.

Some have also found mice in their rooms and been forced to relocate.

Djokovic confirmed he wrote a letter to Australian Open bosses with a list of ‘suggestions’ on how to help disgruntled players.

Among the 17-time grand slam winner’s requests were training time and permission to see coaches for players in hotels, and to move as many as possible to private houses with tennis courts and gym facilities.

But he denied that he or any players complained about the lengthy 14-day isolation period.

Djokovic, 33, wrote: “My good intentions for my fellow competitors in Melbourne have been misconstrued as being selfish, difficult and ungrateful. This couldn’t be farther from the truth.

“Things in the media escalated and there was a general impression that the players (including myself) are ungrateful, weak and selfish because of their unpleasant feelings in quarantine.

“I am very sorry that it has come to that because I do know how grateful many are. 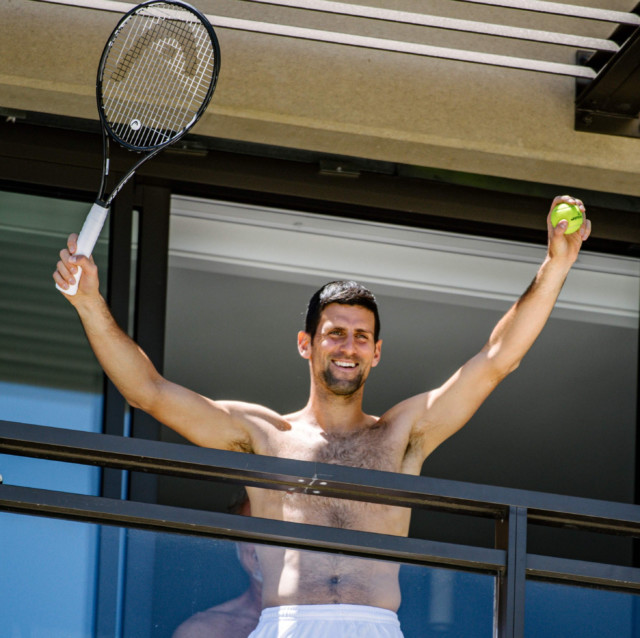 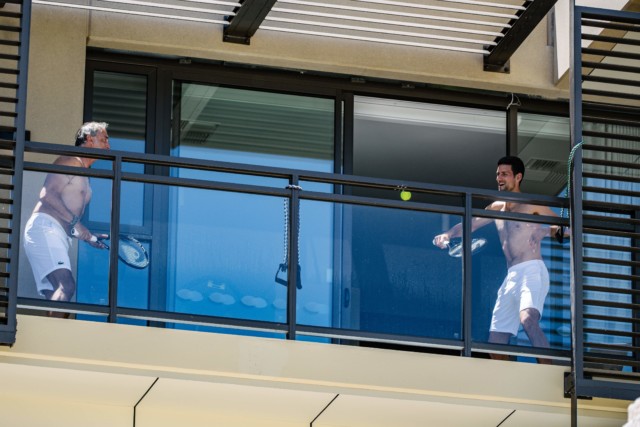 “We all came to Australia to compete. Not being able to train and prepare before the tournament starts is really not easy.

“None of us ever questioned 14 days of quarantine despite what is being said by media outlets.”

The eight-time Australian Open winner was allowed to fly in to Adelaide to enjoy better facilities along with other stars like Rafael Nadal and Serena Williams.

But the rest of his team, along with 72 players, are being forced to quarantine in Melbourne – where the tournament is held.

The Serb added: “I have always had a very good relationship with Craig Tiley, and I respect and appreciate all the effort he puts into making the Australian Open a place to look forward to coming back to each year.

“In our email exchange I used an opportunity to brainstorm about potential improvements that could be made to the quarantine of players in Melbourne that were in full lockdown.

“There were a few suggestions and ideas that I gathered from other players from our chat group and there was no harm intended to try and help. 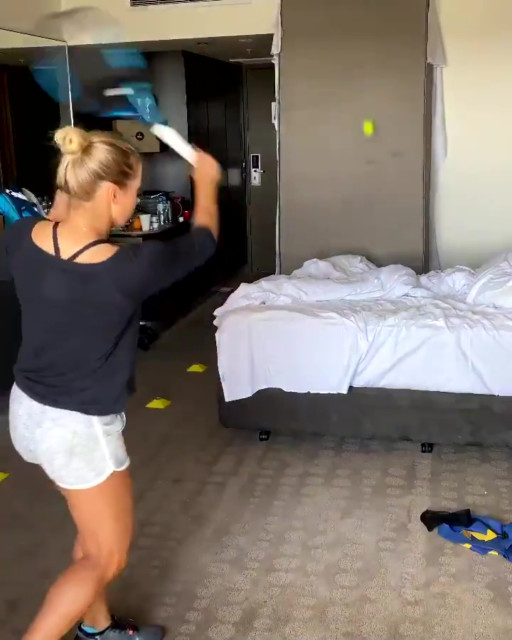 “I was aware that the chances were low that any of our suggestions would be accepted, just like my request to quarantine with my team in Melbourne instead of Adelaide, was denied prior to our travel, because of the strict government regulations.

“Since I couldn’t be with other players in Melbourne, I made myself available to them if needed.”

The Serb made his anti-vaccination stance clear last year before catching Covid at a disastrous tennis event he staged.

Djokovic caught Covid last year after an outbreak at the Adria Tour in Croatia and Serbia last summer – which he helped organise.

Players were not required to social distance and were seen playing basketball and dancing at a nightclub.

Djokovic continued: “I understand that organising international sporting events during a pandemic poses health risks to the local community and to the players themselves. 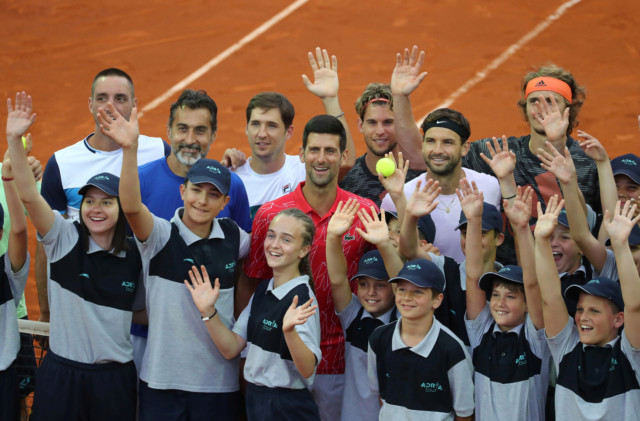 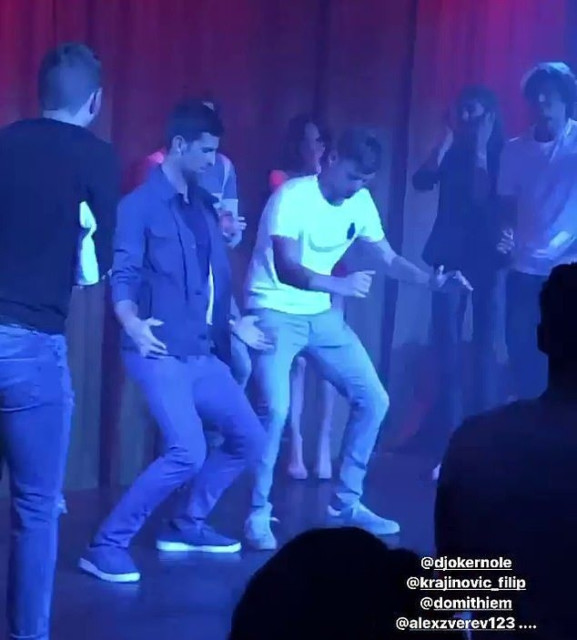 Players were seen dancing on stage at a nightclub 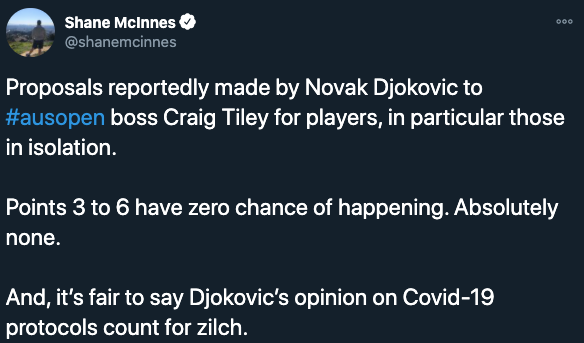 “Therefore, I would like to express my full gratitude to Tennis Australia, the Australian Government and local citizens for being willing to take this risk with us for the love of the game and the multiple opportunities it brings to the economy of the country and it’s people.

“We are honoured, and we will all do our best to follow the guidelines and protocols put in place.

“We do hope that we will be able to nurture our bodies and be ready for the mental and physical endurance and strength tests that are ahead of us once the competition starts.

“I am very much looking forward to playing in front of the people and joining the tennis frenzy and energy of the city that has always carried me towards many victories.”

Tennis aces have posted videos and pictures of themselves training in their hotel rooms to maintain optimum fitness.

The Brits have been occupied – Jo Konta has been stretching, Katie Boulter has done yoga with a view of the Melbourne skyline and Watson has run 5km!

In response to Djokovic’s requests, Victorian Premier Daniel Andrews said: “People are free to provide a list of demands. But the answer is no.

“I know that there’s been a bit of chatter from a number of players about the rules. Well, the rules apply to them as they apply to everybody else, and they were all briefed on that before they came.

“I’m here not so much to be opining about how in touch with the real world these people are. That’s not my job. My job is to make it very clear. People were told what the rules were (before they got here).

“The advice was, ‘It’s not easy, it has to be done properly’. Despite commentary from players about what they’d like to do, it’s about what needs to be done.”