Does French Open have a fifth set tie-break? Wimbledon, US Open and Australian Open rules for final sets
Advertisement 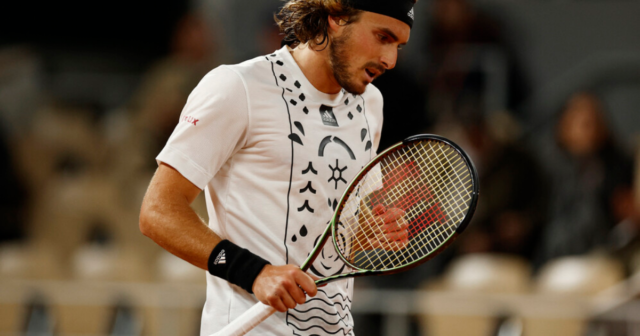 THE French Open is back and as Novak Djokovic and Rafael Nadal do battle once again.

Meanwhile one of the other favourites has been taken to a fifth set in the first round – Stefanos Tsitsipas.

Stefanos Tsitsipas was taken to a fifth set by Lorenzo Musetti

Until 2019, players at Wimbledon used to keep playing until there was a winner by two clear games.

However, this rule was then changed with tie-breaks now being played when a fifth set reaches 12-12.

And the new format was used in the final the same year when Novak Djokovic triumphed over Roger Federer.

Did you miss our previous article…
https://www.sportingexcitement.com/tennis/tennis-champ-emma-raducanu-scores-again-this-time-on-the-cover-of-elle/

Advertisement. Scroll to continue reading.
In this article:frenchopen, stefanostsitsipas, thefirst