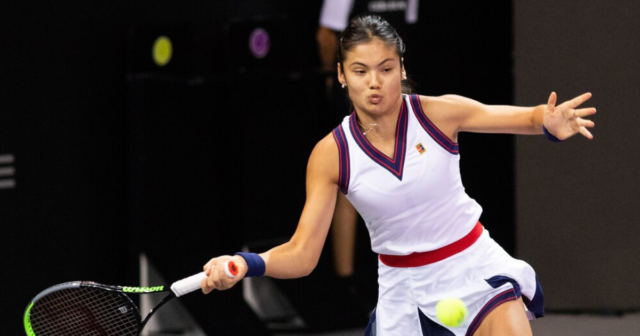 EMMA RADUCANU has not seen the US Open trophy since returning home — and now she has given it AWAY!

After leaving New York following her remarkable victory, the 18-year-old handed back the real thing to officials and was given a replica.

Yet she did not bring that back through Heathrow Airport’s customs, deciding instead to let the LTA display it at their London headquarters.

The Brit said: “It’s not at home, it’s going to be stored at the National Tennis Centre in London if you want to see it. I just thought the LTA have done so much for me.

“I wanted them to have it as a big thank you for everything they have done. They took control of my development.

“I thought it was just a nice gift and a nice moment. It’s a token of my appreciation.

“I haven’t actually seen it. I got it shipped straight to the NTC so I can’t wait to go there. It will be a special moment when I next see it.”

After a battling fightback in the first round of the Transylvania Open, Raducanu played much better in her 6-3 6-4 second-round win over Romanian world No 106 Ana Bogdan.

She backed up her first WTA Tour level win on Tuesday by moving into the quarter-finals, where she faces Ukrainian No 6 seed Marta Kostyuk on Friday.

The pair have history that goes back to their time together in the juniors.

And the exciting prospect of facing her idol and former Wimbledon champion Simona Halep in tomorrow’s semi-finals remains on the cards, after the Romanian No 1 seed beat Russia’s Varvara Gracheva 6-4 6-2.

Raducanu’s proud dad Ian, who missed the US Open triumph due to pandemic-related travel restrictions, sat in the press seats and showed his approval, enthusiastically clapping her key shots.

She added: “It means a lot that he is here in his home country.

“He wouldn’t normally travel with me but because it is Romania, he had to come. He wasn’t going to miss the opportunity.

“It’s great to have him here because he has obviously gone through my whole journey with me.

“This is a really cool moment for me. It’s a very new experience but I’m so happy my first two WTA wins were here in Cluj in Romania.

“I just want to stay in the tournament for as long as possible really.”