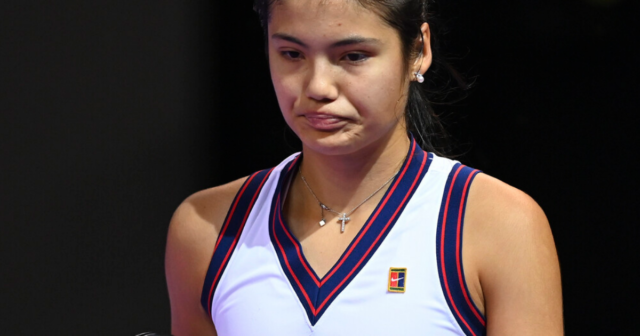 ERROR-RIDDEN Emma Raducanu has missed on a blockbuster clash with her idol Simona Halep after crashing out of the Transylvania Open quarter-finals.

The prospect of Britain’s US Open hero facing the top seed on Saturday night in Cluj-Napoca is off the table following a 6-2 6-1 loss inside an hour to sixth-seeded Marta Kostyuk.

The teenaged pair had played before at junior level tennis but Raducanu revealed that the Ukrainian “destroyed” her when she was 12 at Tennis Europe level.

There was to be no revenge on this occasion, Raducanu hitting SEVEN double faults and making too many mistakes to stay competitive.

In the penultimate match of the day, Halep had cruised into the last four with a 67-minute 6-1 6-1 obliteration of fellow Romanian Jaqueline Cristian.

Maybe it was the hope of meeting her hero the next night that affected Raducanu’s game and mind and she was simply thinking too far ahead, which is always dangerous in professional sport.

Whatever it was, something was wrong with Raducanu in the opening skirmishes – her serve wasn’t working, the drop shot was hitting the net, and her shots down the line were missing their target.

The Brit was broken in the opening game of the match after TWO double faults, the latter coming on break point for Kostyuk.

As her game slowly started to improve, a way back into the first set came courtesy of one almighty shank from Kostyuk that almost had the few fans in the stands ducking for cover.

But when your luck is out, it can be really out, as Raducanu found to her cost as she lost a break-point chance and hit the net cord twice in the same rally.

Two double faults in the seventh game saw her broken for the second time in the first set and she had to accept her fate that she was going to fall behind.

In the first match here in Romania, Raducanu came from a set down to knock out Slovenian Polona Hercog for her first win at a WTA Tour event.

Yet a second comeback never happened and in the opening game of the second set she was broken again following two further double faults.

In the third game, Raducanu’s energy levels visibly increased and her array of shot-making briefly returned. 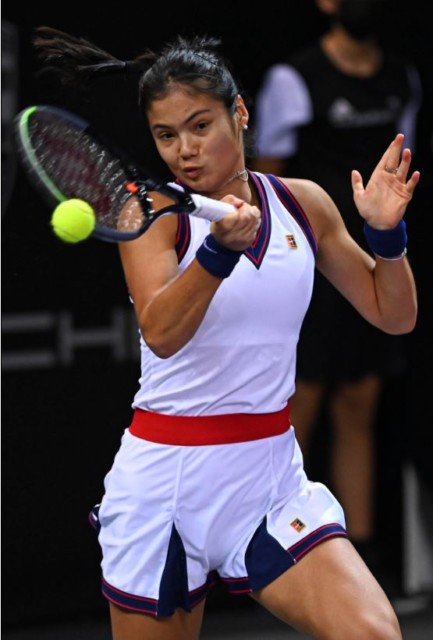 Emma Raducanu again struggled to match her US Open-winning form

But the damage had already been done and after a seventh and final double fault in the fifth game, world no.55 Kostyuk, 19,  prevailed in 57 minutes on the fourth match point.

Though she now has to pack her bags, there is some consolation at least for Raducanu and her doting dad Ian.

She can now head to Bucharest to see her 88-year-old grandmother Niculina, show off some photos from the US Open title and have some that delicious Sarmale (mincemeat wrapped in cabbage rolls).

Advertisement. Scroll to continue reading.
In this article:Simona Halep