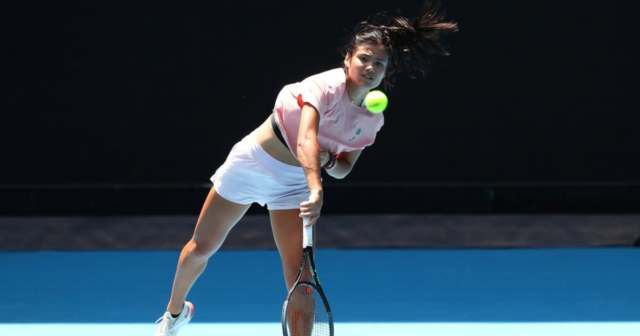 EMMA RADUCANU faces the toughest Slam opponent of her career next week – in the shape of a fellow US Open winner.

Though Sloane Stephens has dropped to 68th in the world, the American, 28, won the New York Slam in the autumn of 2017 – four years before Raducanu was Queen of Flushing Meadows.

The pair will meet in the first round of the Australian Open and it will be the first time Raducanu has met a major winner in three Slam appearances.

And all eyes will be on Raducanu’s form and fitness following her 6-0 6-1 humbling by Kazak Elena Rybakina in the first round of the Sydney International.

The 19-year-old from Kent, who is seeded 17th in Melbourne, contracted Covid-19 before Christmas and has only played once in two months.

Novak Djokovic was named in the men’s draw – despite the threat of deportation.

The Serb – the defending men’s singles champion in Melbourne – was drawn against fellow countryman Miomir Kecmanovic in the first round.

The 34-year-old is trying to win Slam No21 and overtake the record tally currently shared with rivals Roger Federer and Rafa Nadal.

Yet, overnight Djokovic was waiting to find out if immigration minister Alex Hawke would attempt to kick him out of the country for a visa error.

The world No1, who is unvaccinated, had won a court appeal to stay in the country after border officials did not follow proper procedure.

But then it was discovered there had been inconsistencies with his entry application.

If his visa is revoked again and he is eventually booted out of Oz, then he would face the prospect of a three-year ban from Australia.

The Australian Open, the first Grand Slam of the 2022 season, starts at Melbourne Park on Monday.

In the draw – which was delayed by more than an hour – Andy Murray was paired against 21st seed Nikoloz Basilashvili.

This comes a day after the Scot beat the Georgian in the Sydney Tennis Classic.

British No1 Cameron Norrie will play American Sebastian Korda – who is in Covid self-isolation in Adelaide – while No24 seed Dan Evans is up against Belgium’s David Goffin.

Murray and Evans would meet in the final in Sydney if they win their respective semi-finals on Friday.

Australian world No1 Ash Barty starts her quest for a first home Slam against a qualifier – while Nadal is up against unseeded American Marcos Giron.

Heather Watson, who is in the same section of the draw as Raducanu, will play Egyptian Mayar Sherif in the first match.