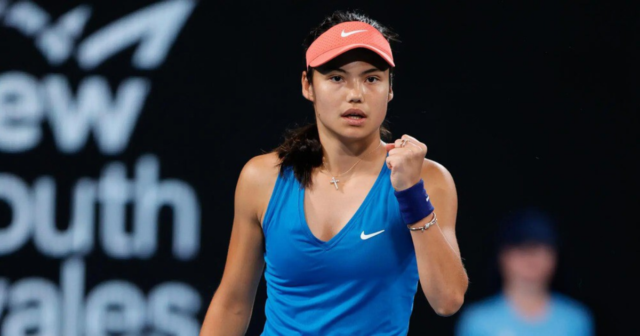 The Kent teenager became a worldwide sensation when she won the 2021 US Open title last September on her debut and in flawless fashion – without dropping a set in 10 matches that started in qualifying.

It was one of the most sensational stories in British sporting history and shocked the world of tennis.

Sponsors immediately queued up to pay her to wear their best diamonds or most glamorous frocks or advertise their top-selling products.

The trappings of instant overnight success have seen her invited to various celebrity functions – such as the recent James Bond Premiere and Met Gala ball in New York.

Yet Australian coach Jones caused plenty of debate and controversy when he accused Raducanu of being distracted and affected by lucrative off-court endorsement deals, especially as her form inevitably dipped after the Flushing Meadows triumph.

The words were meant as a warning to emerging England star Marcus Smith about the pitfalls of newly-acquired fame.

But his comments were widely panned and even labelled “sexist” by former British No.1 Jo Durie and “patronising” and “misogynistic” by Olympic champion Kate Richardson-Walsh

Jones, 61, later wrote a letter to Raducanu to clarify his comments, claiming he was not criticising the mentality and mindset of the 19-year-old.

However in an advert filmed for Nike, Raducanu is seen returning tennis balls while the words ‘distracted’, ‘perfect’, ‘fluke’, ‘flawless’ and ‘’one-hit wonder’ flash up in large white writing on a black background behind her.

In an Instagram post, Nike London said: “World off. Game on. Bromley’s own Emma Raducanu has started her first full year on tour.

“Her plan? Same as it’s always been.

“Shut out the noise and take on the opportunity of each challenge.

“Emma knows the journey forward is all about progress.

“And progress comes one point at a time.”

At the start of her first full season on the WTA Tour, Raducanu will face American Sloane Stephens – the 2017 US Open champion – in the first round of the Australian Open next week.

All eyes will be on Raducanu’s form and fitness following her 6-0 6-1 humbling to Kazak Elena Rybakina in the first round of the Sydney International.

The world No 18 contracted Covid before Christmas and has only played once in two months.

Did you miss our previous article…
https://www.sportingexcitement.com/tennis/djokovic-will-be-thrown-back-in-detention-centre-in-hours-faces-being-frogmarched-to-plane-by-armed-cops-over-visa-row

Advertisement. Scroll to continue reading.
In this article:Australian open, York