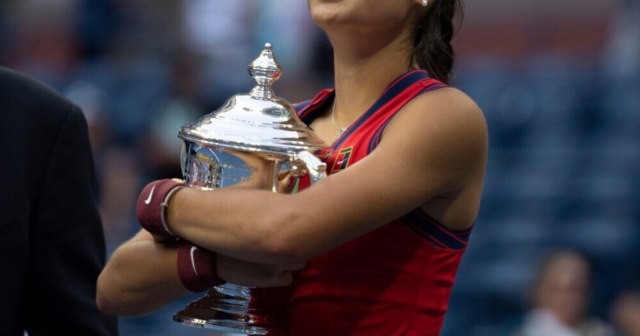 US OPEN champion Emma Raducanu is the favourite to win this year’s Sports Personality of the Year award.

The 18-year-old sensationally triumphed on her Flushing Meadows debut, becoming the first British woman in 44 years to win a Grand Slam.

Her US Open triumph is the sporting story of the year

And the remarkable achievement has made her the overwhelming favourite to pick up the coveted SPOTY prize.

Raducanu is currently 1/10 to win the award at the end of the year.

If the teenager collects the individual prize, she will be the first female to win the award since Zara Tindall back in 2006.

She will also become the youngest woman ever to win it.

Raducanu is miles ahead of second favourite Tom Daley, who is at 5/1 with Ladbrokes.

The 27-year-old diver finally got his hands on an Olympic gold medal in Tokyo this summer after clinching victory in the men’s synchronised 10 metre platform diving event alongside Matty Lee.

He is followed by another Olympic champion in the shape of swimmer Adam Peaty.

Seven-time Olympic champion Jason Kenny – who added another gold to his collection in Japan – is another athlete in contention for the award.

And he is followed by Lewis Hamilton, who will make history if he wins the Formula 1 drivers’ championship this season.

The seven-time winner would move out on his own ahead of Michael Schumacher if he can secure an eighth title.