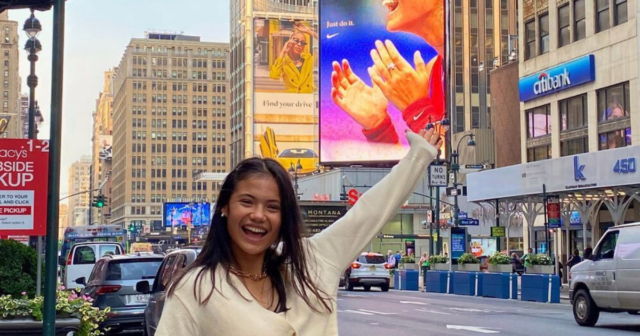 EMMA RACUCANU’S name is up in lights in New York following her stunning debut triumph at the US Open.

The 18-year-old beamed in front a huge billboard adorned with her own face as she continued her celebrations in the Big Apple.

Emma Raducanu claimed the US Open title on Saturday

Britain’s Raducanu became the first qualifier ever to win a Grand Slam title when she overcame Canada’s Leylah Fernandez in straight sets 6-4 6-3 on Saturday.

And it appears no one is more surprised by her success than the player herself, according to the caption she shared on Instagram.

“Sightseeing in NY”, she posted. “Never thought I would see this… coolest thing.”

Raducanu’s stay in New York lasted three gruelling weeks after she was forced to come through the qualifying tournament before reaching the main draw.

The teenager and her tight-knit team even had flights booked to head home after qualifying after fearing she would not make it.

But now the youngest Grand Slam champion since Maria Sharapova in 2004 is a global superstar, with reports suggesting she could earn at least £150million in career prize money and endorsements.

She is already £1.8million richer after collecting Saturday’s winner’s cheque.

Raducanu had joked she only wanted enough prize money to replace the £109 Airpods she lost while in America.

The surreal moments are likely to keep on coming when she does return home to Britain.

Buckingham Palace insiders say Raducanu is being mooted as a possible recipient of a CBE – a rarity for a teenager.

She is also favourite to win BBC Sports Personality of the Year after putting achievements by the likes of Team GB and the England football team in the shade.