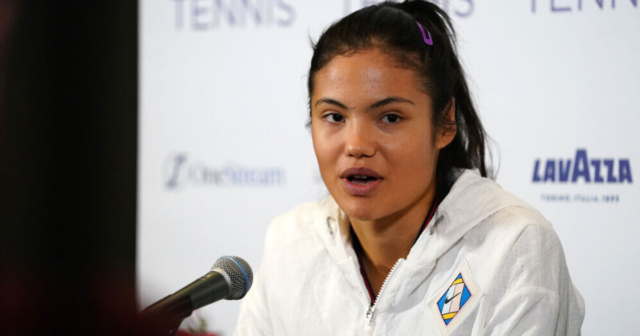 EMMA RADUCANU has withdrawn from an exhibition clash in the UAE after testing positive for Covid – and will be in isolation on the night of the BBC Sports Personality of the Year Awards.

The 19-year-old was scheduled to face Belinda Bencic, the reigning Olympic champion from Switzerland, in a one-off clash at the Mubadala World Tennis Championship on Thursday evening.

Yet she is now in self-isolation in Abu Dhabi after contracting coronavirus at some point over the past few days.

SunSport understands the Kent teenage ace has experienced mild symptoms but is doing okay and resting in her room.

Once she has observed 10 days of self-isolation and provided a negative test, she will able to return to full-time training.

Raducanu said: “I was very much looking forward to playing in front of the fans here in Abu Dhabi, but unfortunately after testing positive for Covid-19, I will have to postpone until the next opportunity.

“I’m isolating as per rules and hopefully will be able to get back on court soon.”

It is a blow to a brilliant year which saw her become a worldwide sporting sensation after lifting the US Open on her debut and also reach the Last 16 of Wimbledon – just months after finishing her A Levels.

Raducanu is practising in the Middle East with new coach Torben Beltz and plans to stay there for Christmas before flying to Melbourne on Monday December 27 for the Australian Open, which begins on January 17.

The world No19 is the overwhelming favourite to lift the BBC Sports Personality of the Year accolade on Sunday evening.

Yet she will have to liaise with BBC presenters Gary Lineker, Clare Balding, Gabby Logan and Alex Scott via Zoom as she will confined to her room for the 68th annual awards.

She had not been due to attend regardless, given her commitments in Abu Dhabi.

Andy Murray will take part in the Abu Dhabi tennis event, facing 2020 US Open champion Dominic Thiem in the first round on Thursday – with the winner taking on Rafa Nadal the next day.

On Raducanu, organisers of the Mubadala World Tennis Championship said: “Emma is now isolating and following all necessary protocols. We wish her a quick recovery and hope to see her back on the court soon.

“We are looking at alternative top female competitors to go head-to-head with Belinda Bencic. Further updates will be provided in due course.”