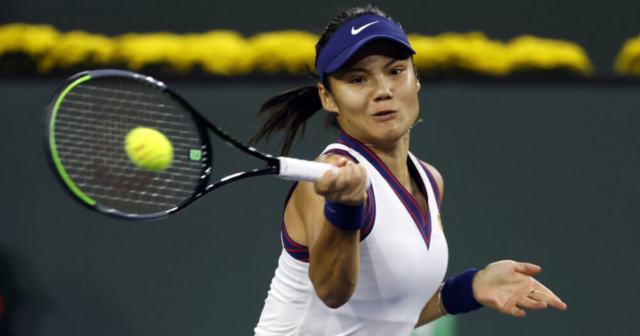 EMMA RADUCANU has been told to stick with one coach in 2022 and stop chopping-and-changing if she wants prolonged success.

The 18-year-old is in Romania – the homeland of her father – where she will play the Transylvanian Open.

This is the second tournament since her mindboggling achievement of winning the US Open in New York on her debut.

Raducanu has begun a trial period with Esteban Carril – the ex-coach of Jo Konta between 2014-16 – but the Spaniard is the fourth different bloke in her corner in four months.

Former British No 1 Greg Rusedski reckons the new teen sensation would be wise to enjoy some coaching stability.

Rusedski, 48, said: “Esteban did a great job with Jo Konta when she had her big breakthrough and got into the top 10 in the world.

“Hopefully this works out for Emma. But she needs consistency from a team point of view to push on with all the success she has had at the US Open.”

Raducanu parted company with veteran Nigel Sears, the father-in-law of Andy Murray, after making the Wimbledon Last 16 and then withdrawing with breathing difficulties on court.

It is understood they are on good terms and Raducanu sent him a bottle of wine and a card to say thank you for his efforts.

The short-term partnership with Andrew Richardson will go down in tennis history as the unknown LTA youth coach guided her to glory at Flushing Meadows.

Once Richardson was out of the picture, Jeremy Bates – who looks after Katie Boulter on a weekly basis – fitted in purely as a stop-gap measure while Raducanu played at Indian Wells this month.

Carril, 44, has been unable to travel Romania but will hope to make a decent impression on the biggest name in women’s tennis now.

Barry Cowan, who once took Pete Sampras to five sets at Wimbledon, said: “Emma has bucked the trend.

“You cannot keep running your career like that. It will eventually catch up with you.

“Certainly she needs to build up and strike a relationship with Esteban. I hope it is successful and lasts.

“I don’t care who you are, whether you are Emma Raducanu, Serena Williams or Novak Djokovic, if you are having coaches short-term, it’s going to come back to bite you.

“You do have to have that consistency and Emma can have that off court.

“I don’t think she needs to overplay until now and the end of the year but make sure she is fresh, physically and mentally.

“Her career is going to be long and her career will be great.”