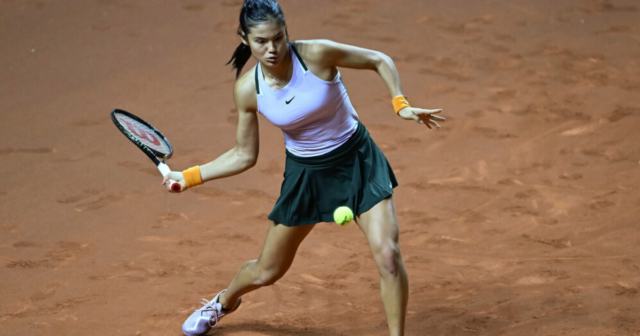 EMMA RADUCANU reckons she will face no pressure when she plays the world No1 on Friday – and labelled it a free swing.

The Brit knocked out German Tamara Korpatsch 6-0 2-6 6-1 in the second round of the Tennis Grand Prix in Stuttgart.

In her first professional clay singles tournament, it was the first time she has won back-to-back matches since October.

And the US Open champion will face Poland’s Iga Swiatek in a glamour quarter-final tie on Friday in Germany – which will please Porsche, one of her many sponsors.

Former French Open winner Swiatek may have assumed the status following the sudden retirement of Ash Barty but she is in good form, enjoying a winning streak of 20 matches.

This will be the first top-10 player Raducanu has faced in her career and will be a real test of her clay development.

The 19-year-old said: “Of course, she is in great form. It will be an interesting match.

“She is number one in the world – so I feel like I have no pressure going out there, playing on clay against her. I am looking forward to the match.

“It could be a good opportunity. I feel there are no expectations of me in the match-up.”

Raducanu’s effortless movement helped her to a first-set romp against Korpatsch as she made just three three unforced errors.

But the Brit’s opponent grew more confident and convincing with her groundstrokes after an early break in the second set, breaking again in the seventh game and closing out at 6-2.

Raducanu, though, was assertive and dominant in the final set, pressurising Korpatsch’s serve as she broke twice for victory.