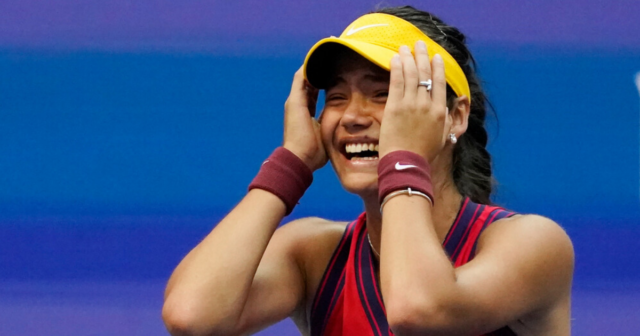 A HANDFUL of lucky punters are celebrating after betting on 499/1 outsider Emma Raducanu to win the US Open.

Another supporter backed Emma before a ball was served at the US Open with a £20 bet at odds of 190/1, pocketing £4,000 with Ladbrokes.

Sam Rosbottom, of Betfair, said: “Just one fan had the foresight to bet on Raducanu at her longest odds of 499/1, with a handful of supporters backing the British star at 200/1 early in the tournament.

“It’s safe to say the days of her entering a major as such an underdog look over for now.”

Punters are already predicting the teen ace will romp to victory at Wimbledon.

As of yesterday, over 70 per cent of all bets on next year’s winner have been on the 18-year-old British sensation.

Raducanu could also steal a march on a host of Olympic gold medallists in the race for the BBC Sports Personality of the Year award.

Many bookies believe the tennis ace, who had been 1000/1 to win it before the US Open, is now odds-on favourite.