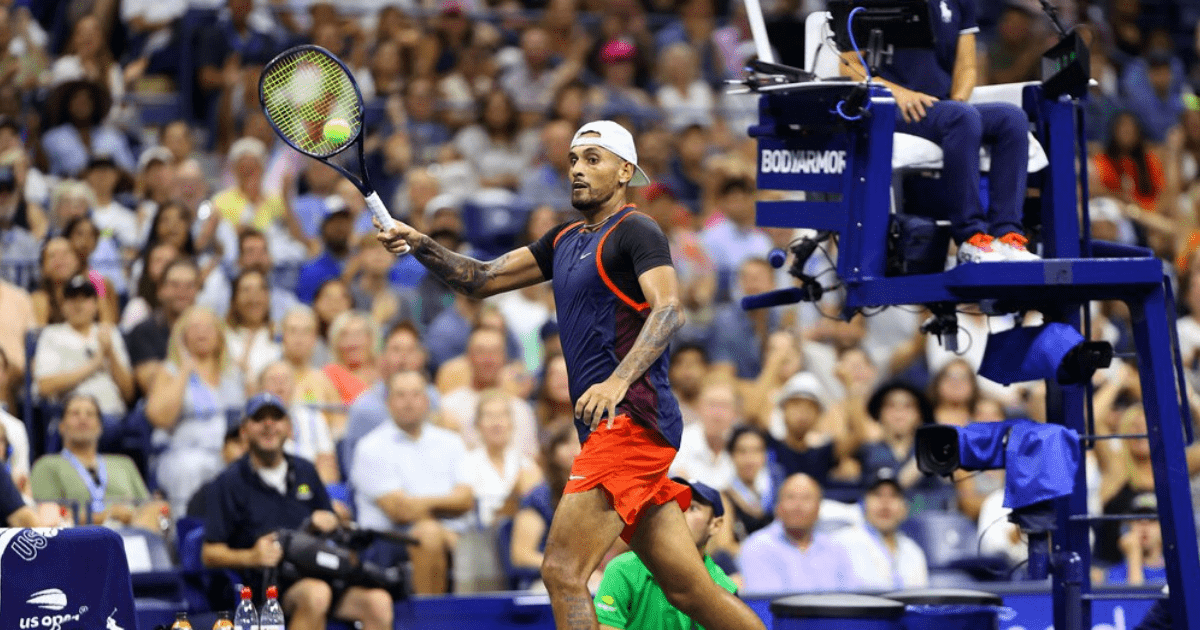 SHOWMAN Nick Kyrgios joked he will look like an idiot on TV despite knocking out the defending US Open champion.

In a typically all-action display – which involved his complete box of madcap tricks – the Australian beat Russian Daniil Medvedev 7-6 3-6 6-3 6-2 in a magnificent last-16 match that lasted seven minutes shy of three hours.

Nick Kyrgios produced a moment of madness with his crazy shot

The Aussie admitted he did not know the rules

well this was… odd pic.twitter.com/zl94yPmGwL

Kyrgios, 27, who plays Russian Karen Khachanov in the quarter-finals on Tuesday, ridiculously lost a point in the third set when he hit the ball illegally after running over to Medvedev’s side of the court.

If the No23 seed had simply let the ball played by Medvedev drop outside of the tramlines, then he would have had break point.

But he hit the ball before it bounced as he ran round the net and the umpire rightly gave the world No1 the point instead for that foul shot.

It was a complete brain fade under the closed Arthur Ashe Stadium roof and Kyrgios was subtly reminded of the rules by Patrick McEnroe – the brother of John – who was working courtside for ESPN.

Kyrgios said: “I still cannot believe the boneheaded play I made over here. I thought that was illegal to be honest.

“That is going to be everywhere on TV so I will look like an idiot. That’s alright.

“It was an amazing match. Obviously Daniil is the defending champion, a lot of pressure on his shoulders.

“I played really well. I have been playing amazing the last couple of months.

This was Kyrgios’s 26th win since June 6 and he says getting to July’s Wimbledon final – he was defeated by Novak Djokovic on Centre Court – was the moment he realised he could capitalise on his enormous talent.

It was a wonderful match on Labor Day weekend and Kyrgios survived three set points in the tie-break before taking the opening advantage.

Medvedev, 26, says he was felt sick due to “crazy” air-conditioning in his hotels and the tournament areas.

The Moscow star was unhappy with the Kyrgios box and claimed they were cheering ‘Come on, get him’ while he was serving.

He moaned: “If they do it second time I’m not playing until they’re out. They cannot do it on my serve, they’re the box of a professional tennis player.”

Kyrgios smashed his racket on the ground twice in anger and was lucky in the second set because he hit a ball violently against the backboard.

If it had hit a fan or a ball kid, then he would have been defaulted – just like Djokovic was two years ago on this same day in the 2020 tournament. 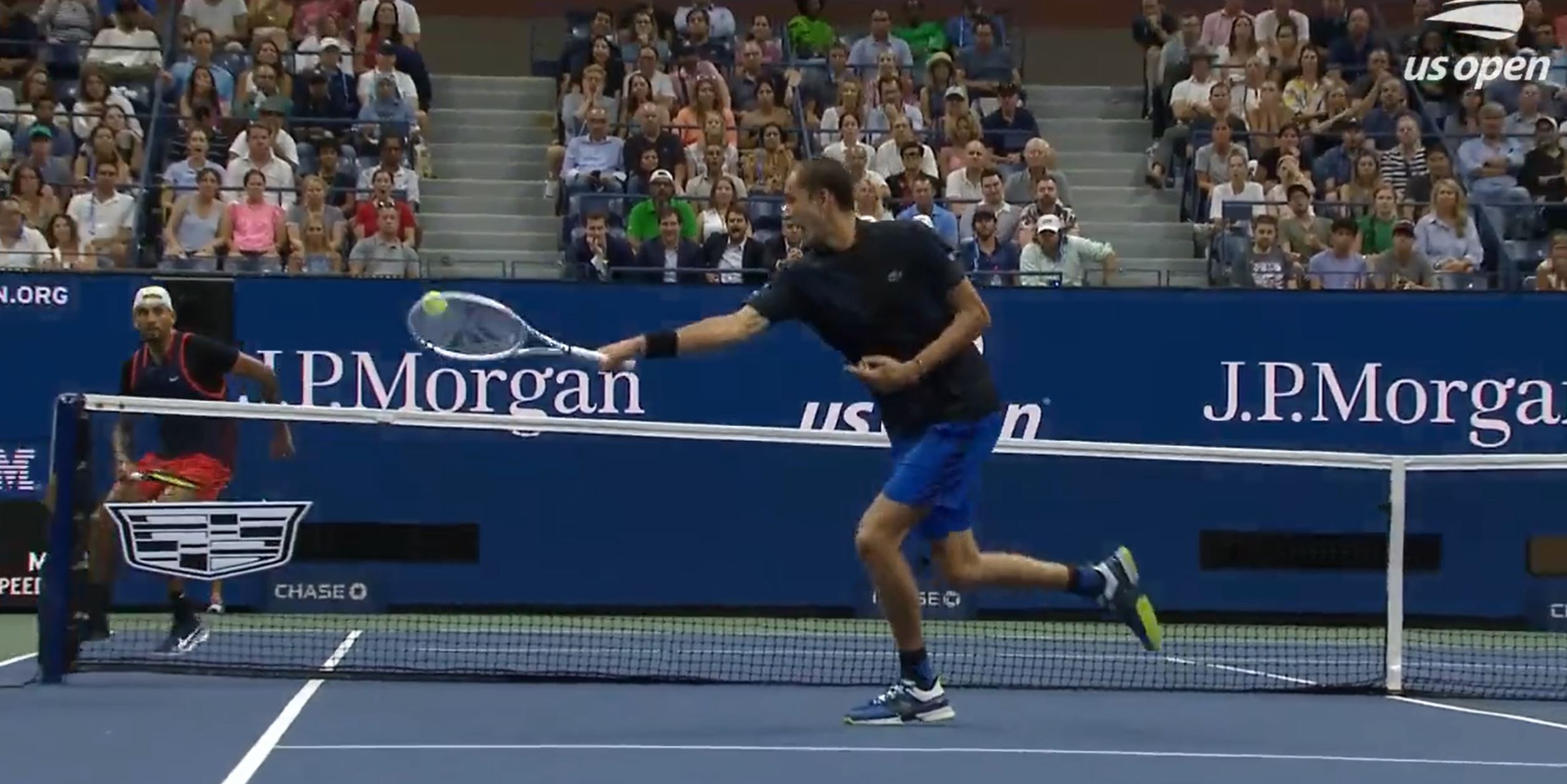 Daniil Medvedev tried to play a volley from close range 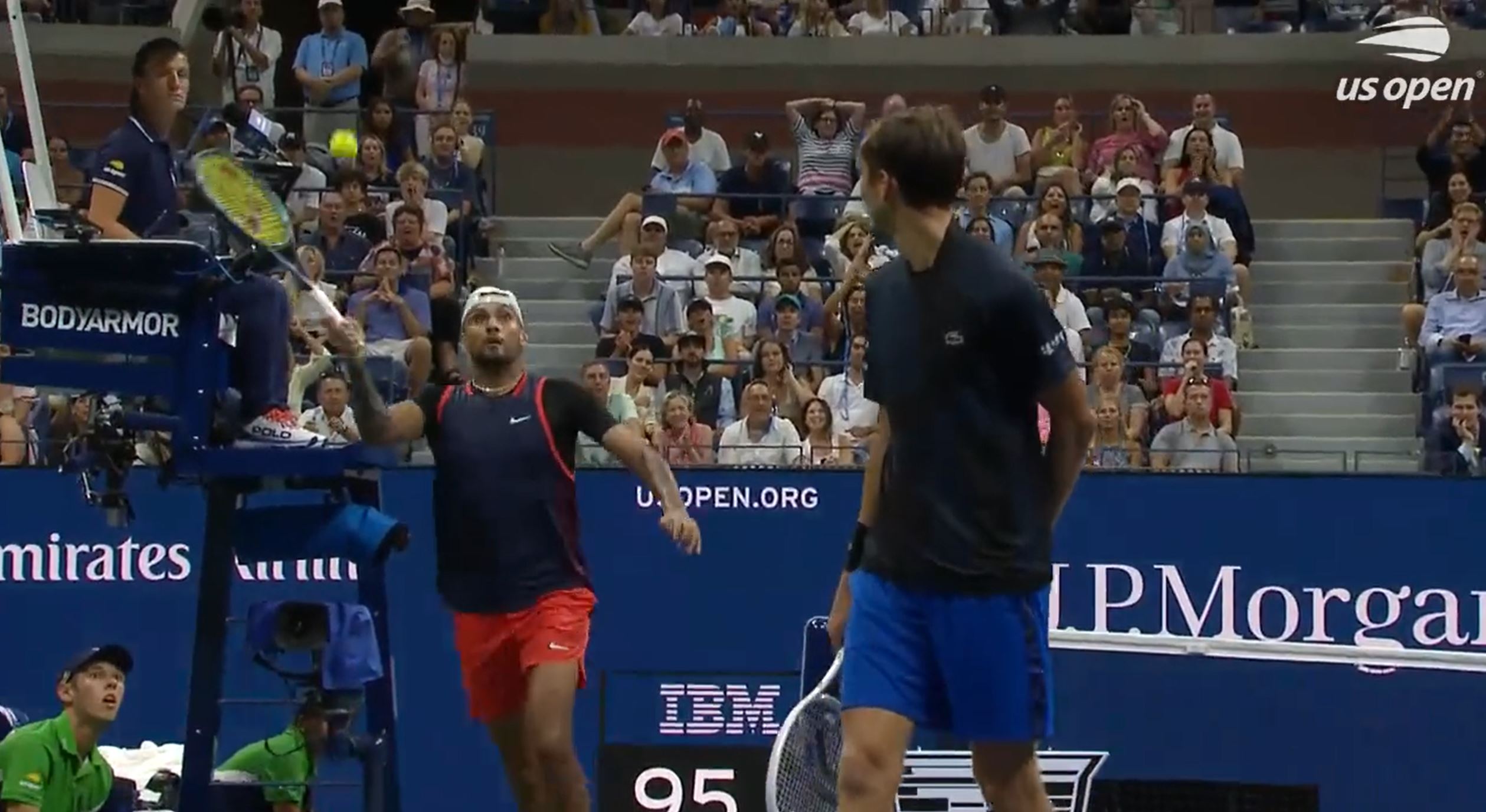 The ball looped up and was going well out 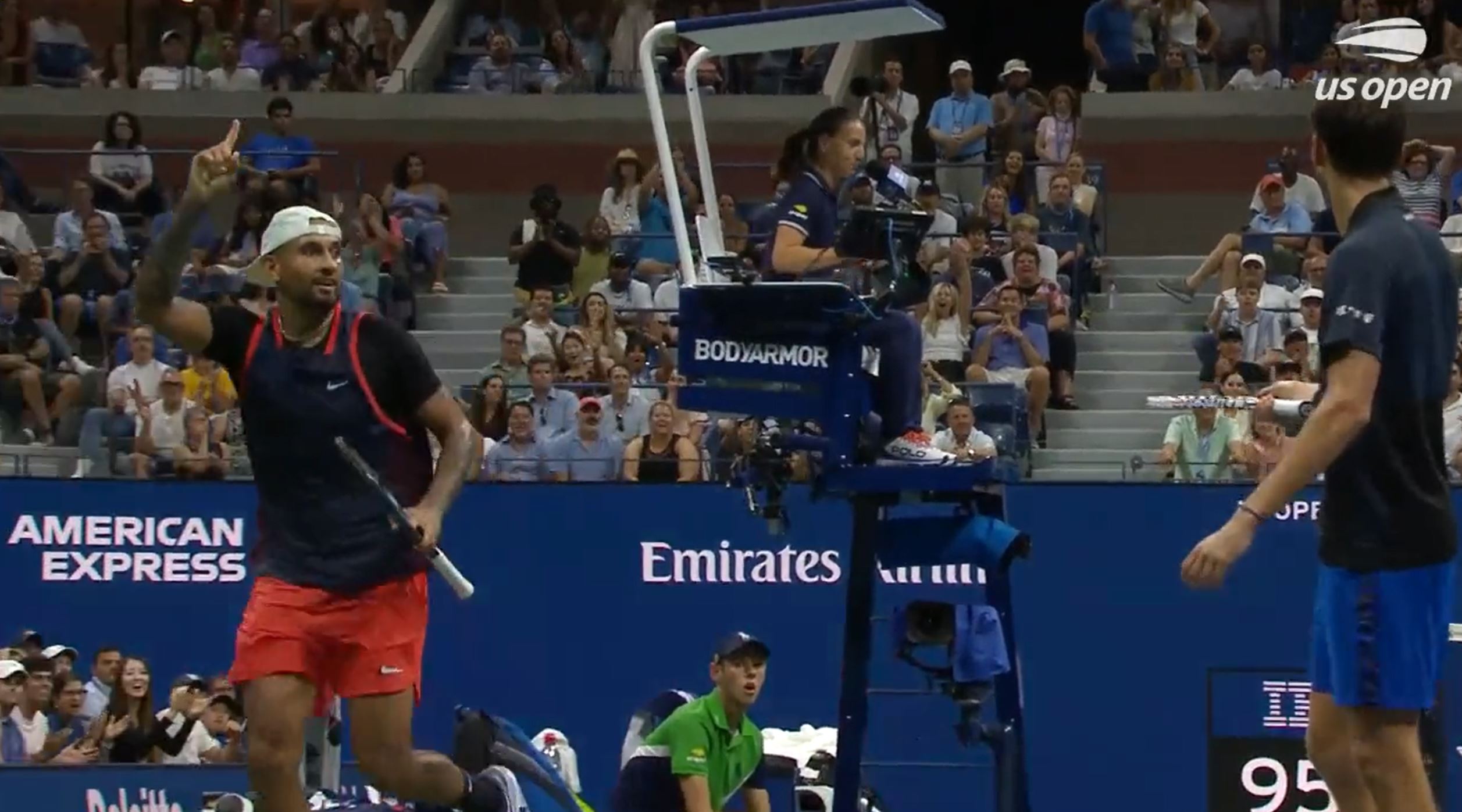 Kyrgios crossed the neck and Medvedev immediately pointed out the blunder

There is great respect between these two players, no sense of animosity, and that was typified when Medvedev went over to check if Kyrgios was okay when he slipped over.

Kyrgios hit an unorthodox between-the-legs first serve in the third set, played the drop shot to perfection, worked wonders with his backhand and then sealed the fourth set and the victory with an ace.

On this form, if he can maintain his discipline and skill, then Kyrgios is arguably the favourite to win this title on Sunday.

Even though his own berates his box when things aren’t going well, Kyrgios paid tribute to his girlfriend Costeen Hatzi and team for keeping him on the straight and narrow.

He said: “I’m just trying to work hard every day. Trying to make every practice session count. Getting to sleep. I’d probably be out every night before.

“Now I have a great girlfriend, she helps me. And my team, I have my physio Will with me. It is all my team, I am really happy and hopefully I can keep it going.

“I’m just working really hard. I just don’t want to let them down.

“You know, we have been on the road now for four months. We all have families that we want to see. I want to make it count. This is my last trip before I go back to Australia.

“I just sat in the locker room afterwards and I’m just super proud of the performance because there was really a time where I didn’t think I was capable of producing and doing this anymore.

“I want to go all the way. Hopefully it is possible. The belief came from Wimbledon. Not winning that final was a hard pill to swallow.” 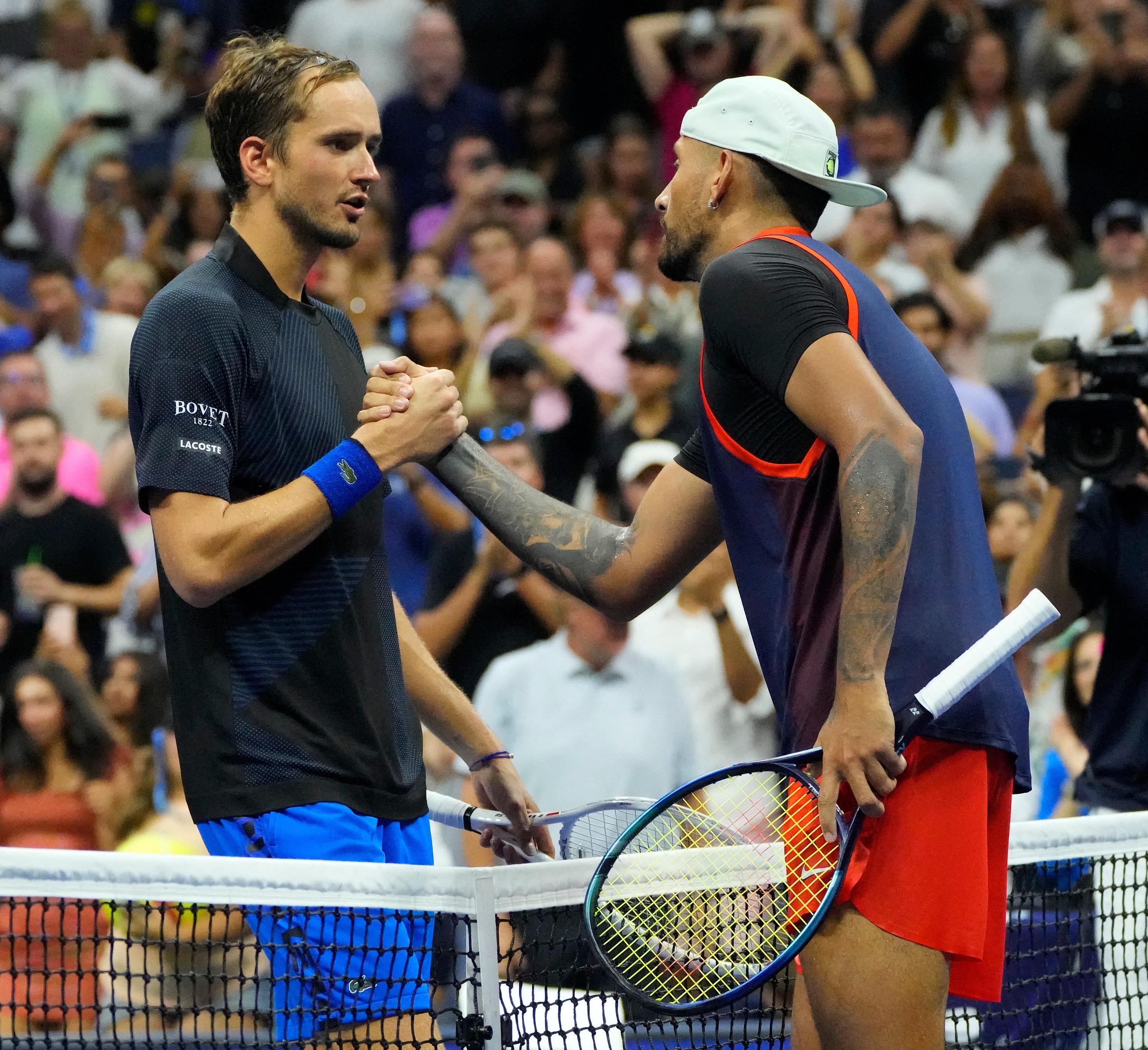 Medvedev’s reign as champion is over after his exit