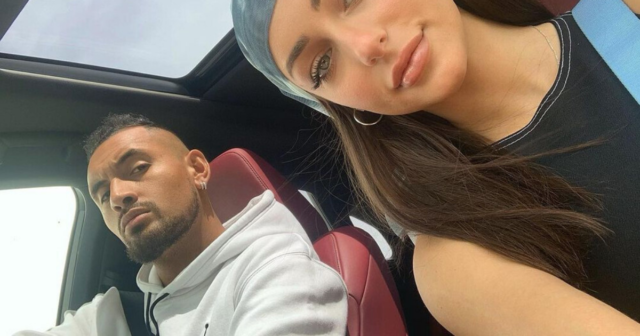 NICK KYRGIOS’ ex-girlfriend Chiara Passari has accused the tennis bad-boy of cheating on her with a model.

Passari also shared DMs appearing to be from Kyrgios, 26, on her Instagram which included one of him saying ‘don’t neck yourself’ – an apparent reference to killing herself – amid a row over strippers.

The pair were involved in a messy break-up in February.

Passari told the Aussie ‘I’m sorry you hate yourself’ after Kyrgios lashed out and called her a ‘s***’.

But they reunited over the summer before another explosive development came in October.

Passari shared a snap of a sleeping Kyrgios in lockdown on her Insta story and wrote: “The girl naked in bed with him isn’t me by the way. Hope that clears it up.”

And the former couple’s on-off relationship has taken another twist.

Passari uploaded screenshots of messages from ‘Nicky’ on Thursday. 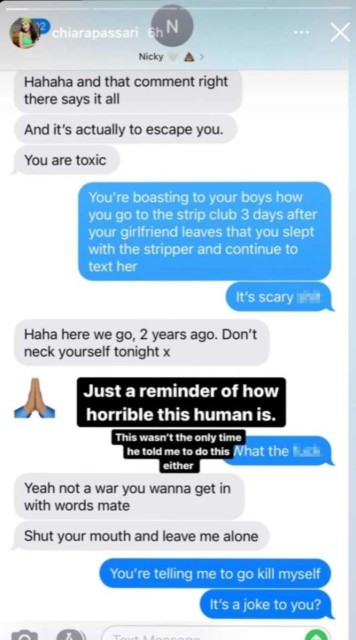 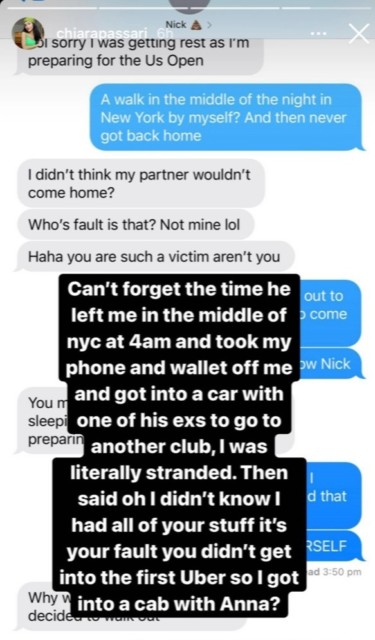 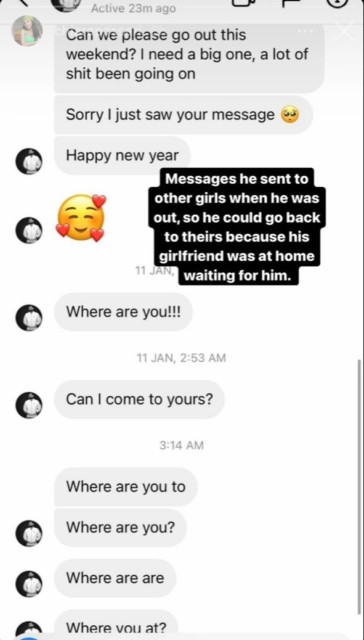 He calls her ‘toxic’ before she retorts with: “You’re boasting to your boys how you go to the strip club three days after your girlfriend leaves you that you slept with the stripper and continue to text her.

Before Kyrgios doubles down and fires back with: “Yeah not a war you wanna get in with words mate.

“Shut your mouth and leave me alone.”

And the final message from Passari read: “You’re telling me to go kill myself.

Passari captioned the screen grab: “Just a reminder of how horrible this human is.

“This wasn’t the only time he told me to do this either.”

The revelations did not stop there as she shared more DMs.

In the next shot, Passari wrote: “Messages he sent to other girls when he was out so he could go back to theirs because his girlfriend was at home waiting for him.”

The stream of texts appear to show Kyrgios sending message after message on January 11 asking where the recipient is and if he can ‘come to yours’.

After the DMs, Passari shared a snap of Kyrgios, two women and another man which she captioned: “Also had a little relationship behind my back.”

Kyrgios was tagged along with Australian fitness model Mary Vitinaros who regularly shares glamorous snaps of herself with her 117,000 Instagram followers.

And in a final blow to the controversial tennis player, Passari shared one last message exchange.

She labelled the screenshot: “Can’t forget the time he left me in the middle of NYC at 4am and took my phone and wallet off me and got into a car with one of his exs to go to another club.

“I was literally stranded.

“Then [he] said ‘Oh I didn’t know I had all your stuff, it’s your fault you didn’t get into the first Uber so I got into a cab with Anna’.”

The message stream showed Chiara saying: “A walk in the middle of the night in New York by myself? And then never got back home.”

“Whose fault is that? Not mine lol.

“Haha you are such a victim aren’t you.”

This is the latest infidelity accusation to come from Passari.

Kyrgios deleted all photos of the pair from his Insta in February after she posted a cryptic post about ‘cheaters’.

And earlier this year he was said to be texting Rita Ora.

Women’s Aid is an organisation which helps women and girls suffering from domestic abuse.

Advertisement. Scroll to continue reading.
In this article:Nick Kyrgios, York