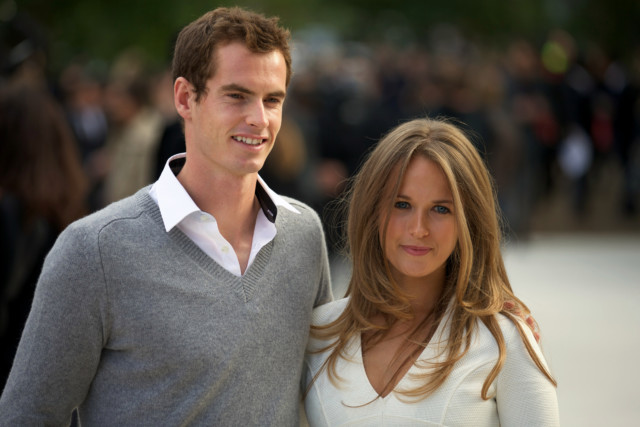 TENNIS fans will be cheering on their favourite players from Henman Hill as Wimbledon returns this week – though the roar might be a bit quieter than usual this year.

Covid-restrictions mean the tournament, which was completely cancelled last year, will go ahead with a reduced spectator capacity – but the top seeds know they can still count on the support of their loyal partners.

Players are normally allowed to bring a 15-strong entourage of coaching staff and family members.

But this year they’re only permitted to take a maximum of three people with them to the tournament.

And we already know for sure which partners we won’t be seeing at Wimbledon in 2021.

Australian Love Islander turned OnlyFans model Vanessa Sierra will be absent after boyfriend Bernard Tomic crashed out in the second round of qualifying.

German Strictly winner and contortionist Lili Paul-Roncalli also won’t be in the stands as her US Open-winning boyfriend Dominic Thiem was forced to pull out of the tournament with a wrist injury.

So who are we likely to see tucking into strawberries and cream at Centre Court?

While Vanessa Sierra might not be attending, another Aussie dating show star will be.

That’s because 27-year-old player Jordan Thompson is in a relationship with former Bachelor contestant Brittany Hockley, 32. 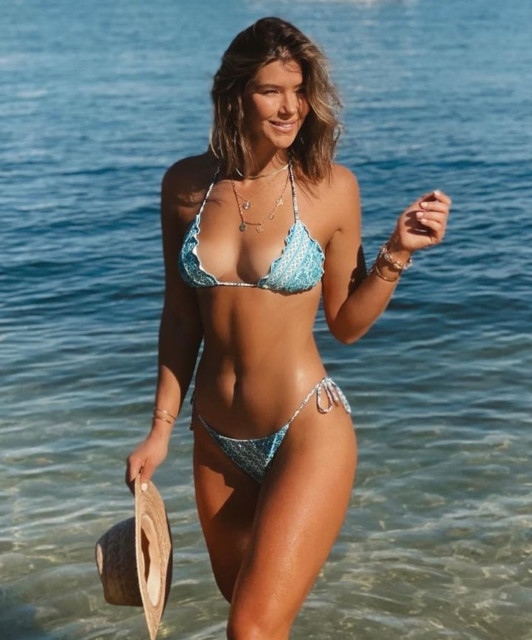 Brittany Hockley, 32, became famous Down Under when she appeared on The Bachelor

Brittany, a qualified radiographer, got down to the last two in the 2018 series of the Australian dating show.

But the series ended in disaster when the series’ bachelor, ex rugby pro Nick Cummins, decided he didn’t want a relationship with either of the finalists.

Brittany revealed her relationship with Thompson, ranked 76th in the world, to her 190,000 Instagram followers in February. 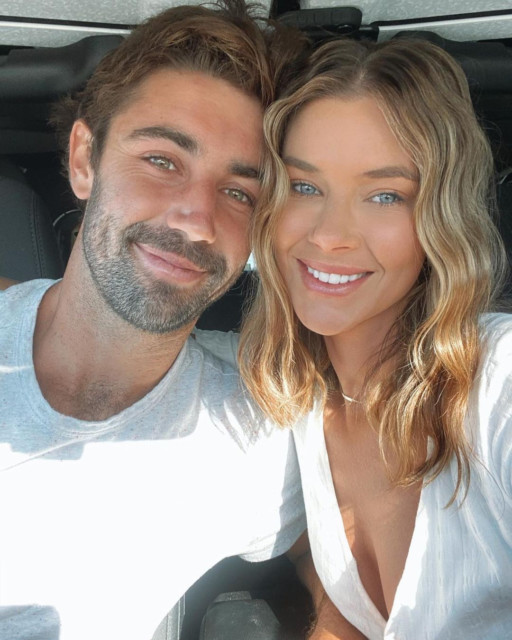 She also shared her heartbreak at her fella having to begin his months-long tennis tour away from home just weeks after the relationship started.

“I’ll try and go to Wimbledon and maybe America, but it’s all dependent on Covid,” Brittany said.

US pro Sam Querrey also had a flirtation with dating shows when he appeared on Millionaire Matchmaker – before finding love with wife Abby.

The stunning model has reportedly posed for luxury lingerie brand La Perla along with a string of magazines.

She tied the knot with Querrey in 2018 and they now have a one-year-old son, Ford Austin. 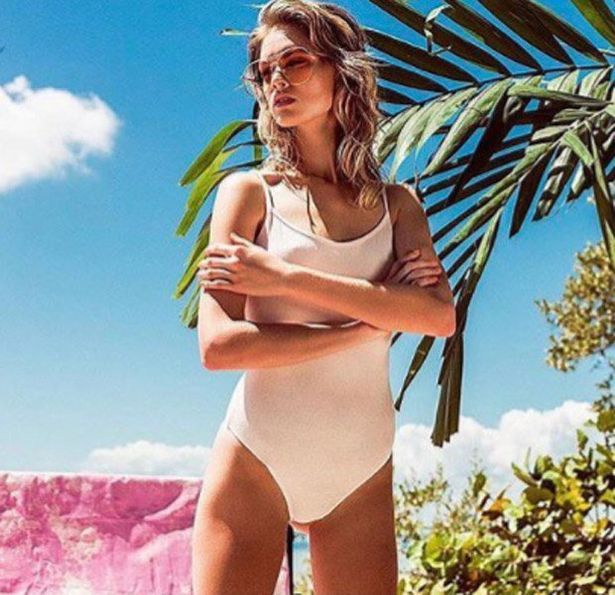 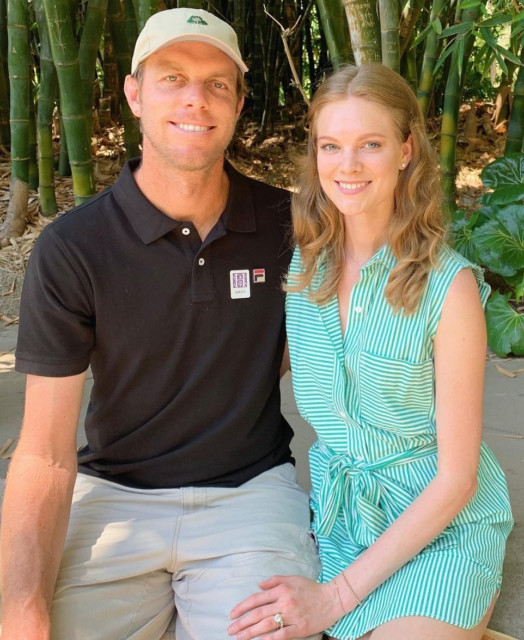 Since 2018 she’s been married to Sam Querrey, who knocked Andy Murray out of Wimbledon a year earlier

The glamorous couple caused uproar in January when it was revealed they came into the UK on a private jet from the St Petersburg Open last October despite knowingly having Covid.

Querrey said he chartered the plane because he didn’t want his family to isolate in a Russian hospital for two weeks, as per Kremlin rules at the time.

“In my opinion, we didn’t really put anyone in danger,” he told Sports Illustrated.

Bookies’ favourite Novak Djokovic also knows a thing or two about Covid outrages, having been branded an anti-vaxxer last April.

So too does his wife, Jelena, who has been censored by Instagram for sharing a video linking the pandemic with 5G. 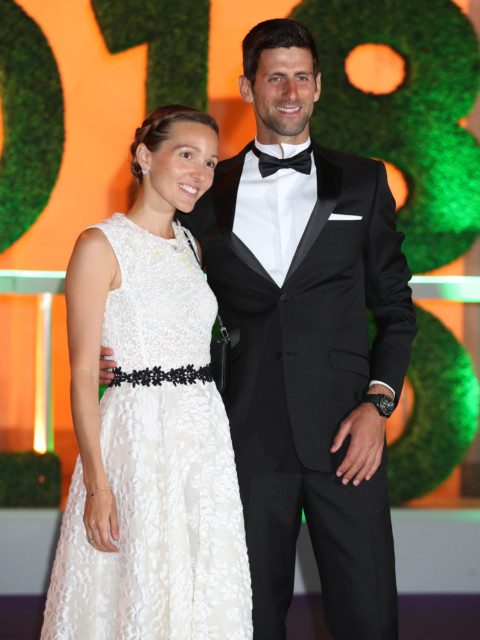 Jelena has known world number one Novak Djokovic since her schooldays 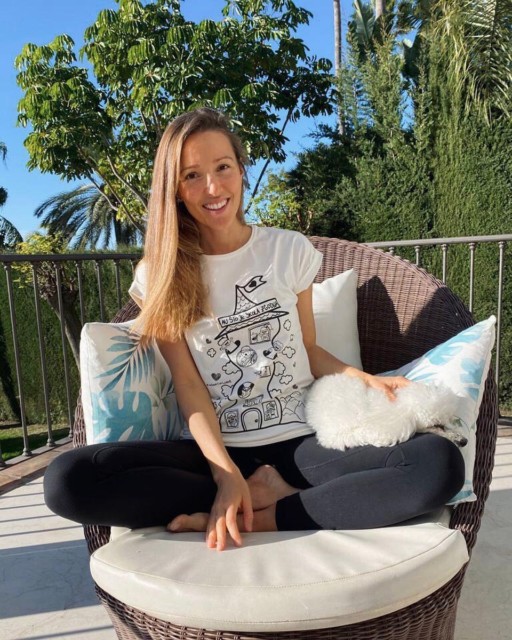 Jelena is the director of education charity, the Novak Djokovic Foundation

As well as being the mother of their two kids, Jelena is the director of their charity, the Novak Djokovic Foundation, which aims to help children in Serbia realise their dreams by improving the country’s education system.

Their marriage has been dogged by infidelity rumours in recent years, which Novak has consistently denied.

In March, a Serbian model revealed she was offered £50K to secretly film herself seducing Novak in a twisted blackmail plot.

Two-time Wimbledon champ Andy Murray has also been with his wife, Kim, since they were teenagers.

Kim, 33, is the daughter of Brit tennis coach Nigel Sears – he introduced Kim to Andy at the 2005 US Open.

Despite a brief separation in 2009 – reportedly owing to Murray’s video game obsession – they’ve been together ever since and married at Dunblane Cathedral in 2015. 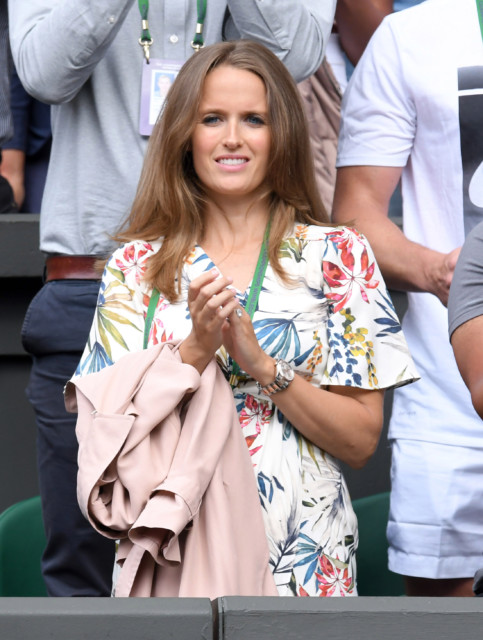 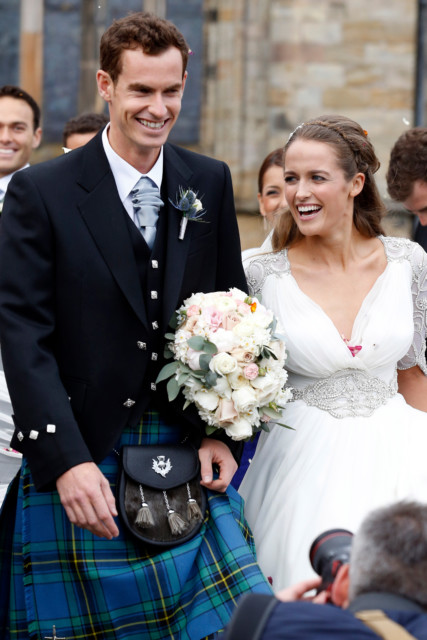 Arty Kim is a skilled painter and has previously been commissioned to do portraits of pets.

She now has four kids with Andy, with the youngest born in March this year during lockdown.

Kim is regularly seen giving her husband her full support from the Wimbledon stands – even being spotted allegedly swearing about one of Murray’s opponents.

Mirka Federer was a professional tennis player in her own right when she met Roger at the 2000 Olympic Games in Sydney.

But the 43-year-old’s career was cut short just two years later by a foot injury.

In the years since, she’s worked as her husband’s PR manager and, like Kim Murray, is a regularly seen supporting her partner at big matches. 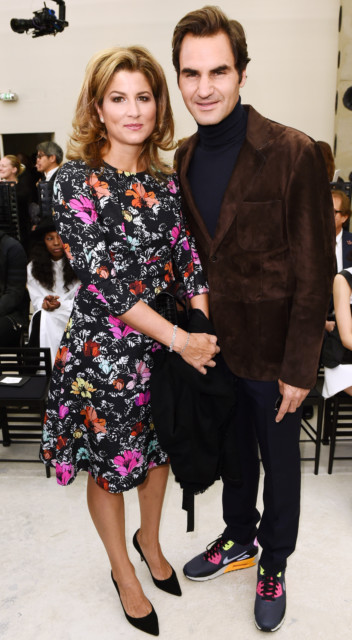 Roger Federer’s wife Mirka was once a professional tennis player

They married in 2009 and, in the same year, Mirka gave birth to identical twins.

Remarkably, they had another set of twins five years later.

Mirka has since become pals with Pippa Middleton, even attending the Duchess of Cambridge’s sister’s wedding in 2017.

Last year, Roger praised Mirka for her self-sacrifice in helping him become the player he is today. 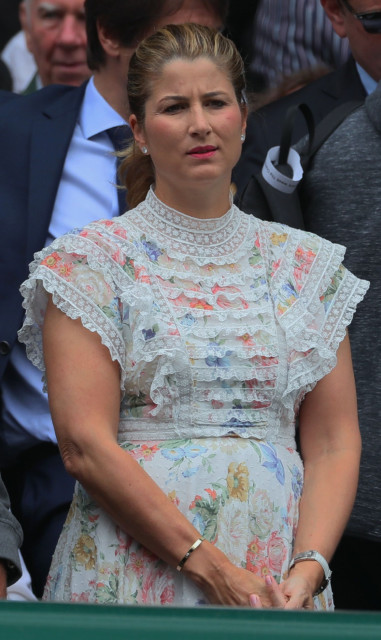 “She has been wonderful in terms of support,” he told The Times. “It was amazing how easily she walked away from tennis and retired, never really tried to come back.

Serena Williams is tipped to claim her eighth Wimbledon title this year.

She’ll be cheered on by her internet mogul husband, Alexis Ohanian.

Ohanian, 38, co-founded Reddit and was estimated to boast a £29million fortune in 2019 – which is just a drop in the ocean next to Serena’s net worth, which is sometimes estimated at over £140million. 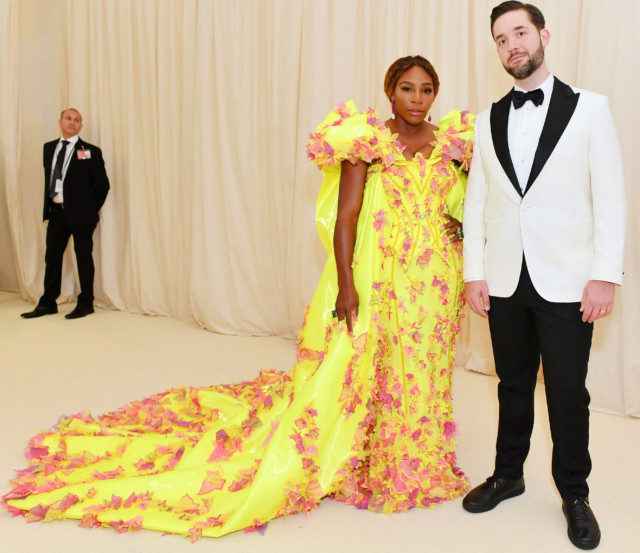 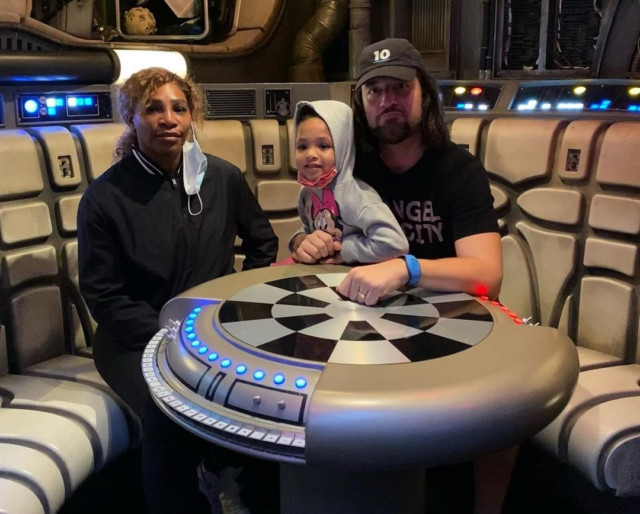 The power couple are proud parents to daughter Alexis Olympia

Their lavish wedding a year later was attended by the likes of Kim Kardashian and Beyonce.

The New Orleans nuptials came weeks after the birth of their daughter, Alexis Olympia.

The 22-year-old hopeful swept aside Aussie Arina Rodionova in straight sets to make it to the main draw.

She’ previously spoken out about her tennis player boyfriend Joel Cannell’s terrifying battle with malaria. 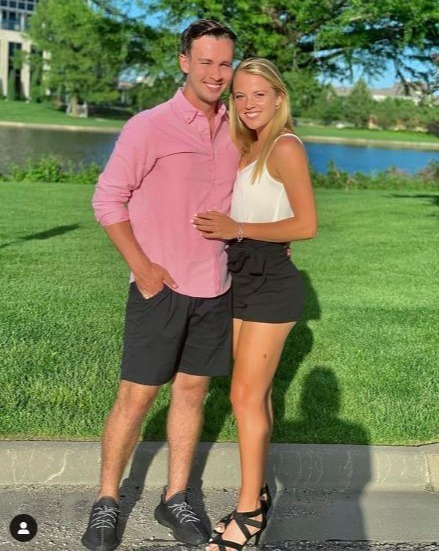 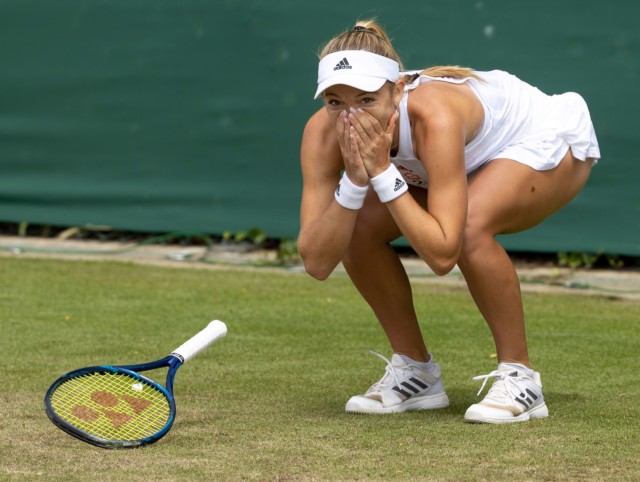 Swan recalled getting a call from Joel the day before her first match at the US Open in 2018.

“He was very out of sorts and I knew there was something wrong,” Swan told SE.

“A day later, he was in hospital diagnosed with malaria. He had just come back from Nigeria and wasn’t even conscious for two days.

“He had the worst strain of it which can be fatal if you don’t catch it early enough.

“I was so worried about him it was so hard to focus on tennis.”

Australian ace Ajla Tomljanovic is also partnered up with a fellow pro player.

She’s in a relationship with Italian Matteo Berrettini, 25, who is the men’s seventh seed at Wimbledon this year. 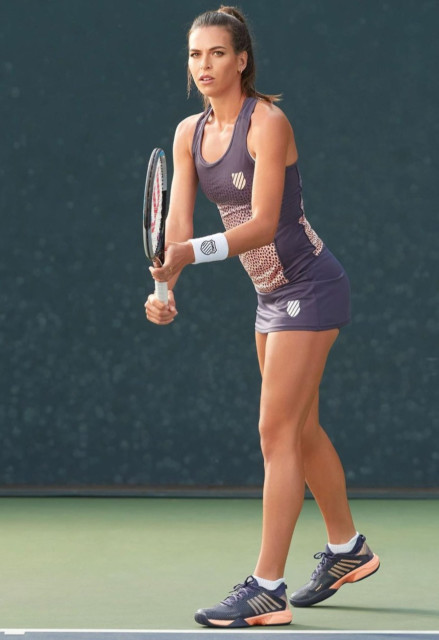 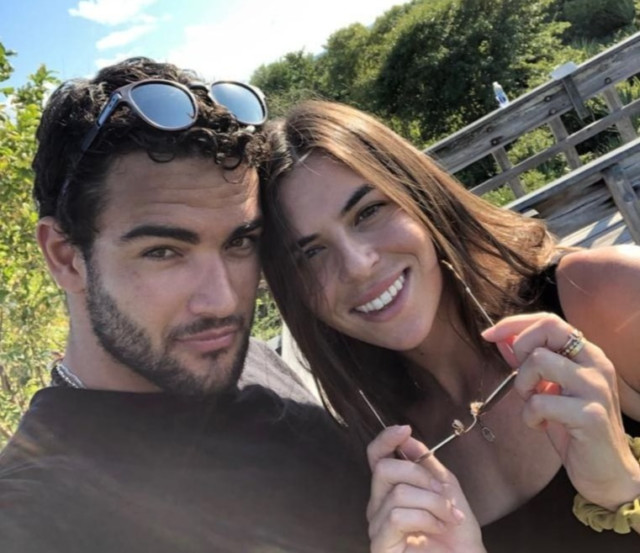 He and 28-year-old Ajla spent lockdown together in Florida but they’re now in separate bubbles ahead of the tournament.

Berrettini is riding high after becoming the first debutant to win the Queen’s Club Championships since Boris Becker in 1985.

“This one feels very special,” he wrote on Instagram last week.