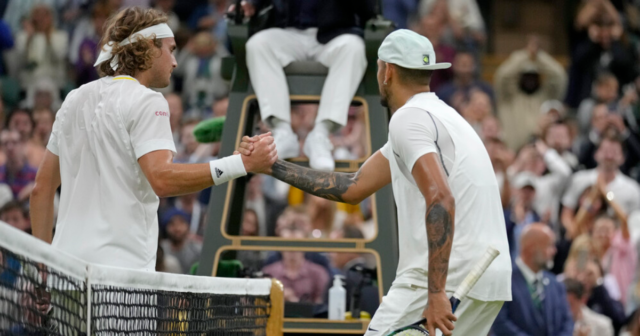 STEFANOS TSITSIPAS and Nick Kyrgios have both been fined following their bad-tempered clash at Wimbledon.

Controversial Aussie star Kyrgios won Saturday’s third-round clash but it was the duo’s conduct which stole the show on Court One.

Habitually outspoken Kyrgios must pay £3,300 for an audible obscenity.

The 27-year-old’s swearing came as he complained to umpire Damien Dumusois and other tournament officials.

It is his second fine of the tournament after he was hit with an £8,250 penalty in his first-round victory over Britain’s Paul Jubb.

He admitted spitting in the direction of a spectator who had been heckling him.

Greek star Tsitsipas was hit with a £8,250 fine for unsportsmanlike conduct.

He received two warnings for hitting the ball recklessly.

On one occasion it was into the crowd and on another into the backboard.

The 23-year-old appeared to be growing irritated by Kyrgios’ use of the underarm serve.

Afterwards, Tsitsipas called Kyrgios a bully, and added: “I have to say it was really bad from my side – I have never done that before, throwing the ball outside the court in that way.”

Kyrgios opens play on Wimbledon’s Centre Court today against American Brandon Nakashima for a place in the quarter-finals.