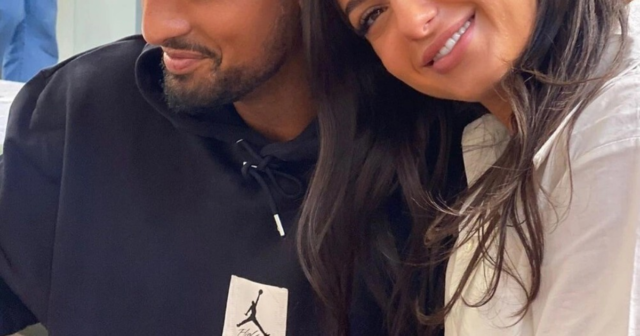 The 21-year-old has been an ever-present at SW19 as the Aussie hothead reached his first-ever Grand Slam final.

But despite his defeat on Sunday – and another £3,200 for an “audible obscenity – he was laughing all the way to the bank courtesy of a £1.05million pay-day.

Costeen was by Kyrgios’ side all fortnight, even spotted cuddling up to her boyfriend on the Wimbledon practice courts on Friday ahead of the final.

And she enjoyed a bit of retail therapy while in London as she splashed out £23,000 at Cartier.

Among the bling was the Juste un Clou bracelet in yellow gold worth £6,135.

The second piece was the Cartier Love bracelet in yellow gold – setting her back a further £4,030.

It capped a superb fortnight for the couple, who could scarcely have dreamed of a Wimbledon final last month.

The world No40 had never made it beyond the fourth round of a Grand Slam singles event.

And despite heated rows during matches against Brit Paul Jubb in his five-set first-round match and Stefanos Tsitsipas later in the week, Kyrgios reached the final.

Kyrgios beat Cristian Garin in the quarter-finals, to set up a semi showdown against Rafael Nadal, only for the Spaniard to withdraw with a torn abdominal muscle.

That meant the Aussie went into the final against Djokovic.

But, despite winning the first set, he couldn’t turn it into a win and maiden Grand Slam title as the Serbian bagged his seventh SW19 crown – and fourth in a row.

Djokovic now has 21 Grand Slams, just one behind Nadal – and one ahead of Roger Federer.