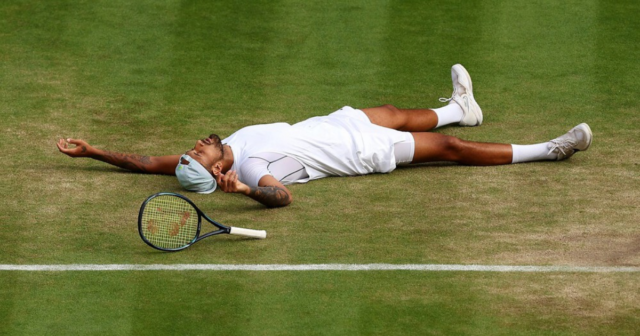 NICK KYRGIOS muttered and grumbled and ranted his way to the first Grand Slam singles semi-final of his career with a straight sets victory over Chilean Cristian Garin.

The Aussie gob artist was relatively subdued by his own volatile standards, a day after it was revealed that he would face a charge of common assault on his ex-girlfriend in a court in Canberra last month.

Kyrgios, 26, admitted he thought his chance of reaching the last four of a major had passed him by.

“I thought that ship had sailed,” said Kyrgios, “I thought I might have wasted my chance earlier in my career.

“I don’t have a coach – I would never put that burden on someone!

“But each and every one of my team plays an important role.

“I’ve been playing this sport since I was seven and to make the semi-final of a Grand Slam I’m very happy.

“Now my Dad will cook us dinner, we’ll watch a movie and chill out.”

Kyrgios can certainly enthral a crowd – some come to cheer him on, others come to cheer whoever he is playing against and some just come to rubberneck at his antics.

But unlike in his fourth-round victory over Brandon Nakashima, when he arrived on court in red trainers, Kyrgios stuck to Wimbledon’s all-white dress code and went pretty close to behaving himself throughout a 6-4 6-3 7-6 quarter-final victory.

During the third set, Kyrgios seemed to complain to the umpire that a spectator was ‘shouting out like a drunken idiot’ – and that it was ‘ridiculous’ when he couldn’t even wear his own choice of trainers.

There was also sarcastic applause at Garin, when he made a needless Hawkeye challenge as Kyrgios struggled to hold his own serve.

Kyrgios tends to stroll around stiffly between points muttering expletives to himself, like the sort of man you’d try to avoid in a public park.

But there were none of the real fireworks which featured in his victories over Stefanos Tsitsipas and Britain’s Paul Jubb earlier in the tournament.

When Kyrgios failed to win any of the first NINE points of the match, it felt as if he might have been distracted by his legal problems.

But the 26-year-old Aussie, contesting his first Grand Slam quarter-final for seven years, soon broke back.

Then came a belting forehand winner down the line, followed by a series of rants at his coaching team when he failed to seal the deal.

Yet Kyrgios broke clay-court specialist Garin to love to seal the first set and then repeated the trick in the fourth game of the second.

Every time Kyrgios got in trouble he admonished himself or his backroom team, then swiftly thumped down an ace.

There was increasing support for Garin – whether the Court One crowd simply wanted to see more tennis or were anti-Kyrgios – and the third set went to a tie-break.

The Chilean, in his major quarter-final, carved out a 5-3 lead but after a couple of thrilling rallies Kyrgios forced match point on the Garin serve – Kyrgios was initially denied a service-return winner by a dodgy line call.

He yelled: “‘Are you kidding me? What the hell are you doing?”

But when the point was replayed, Garin hit a forehand wide and Kyrgios collapsed on the turf in triumph. 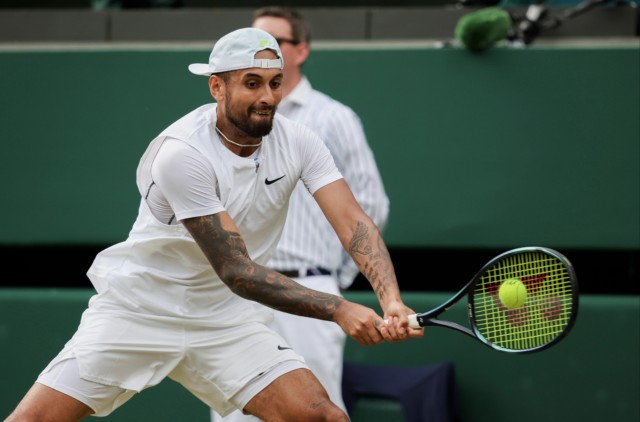 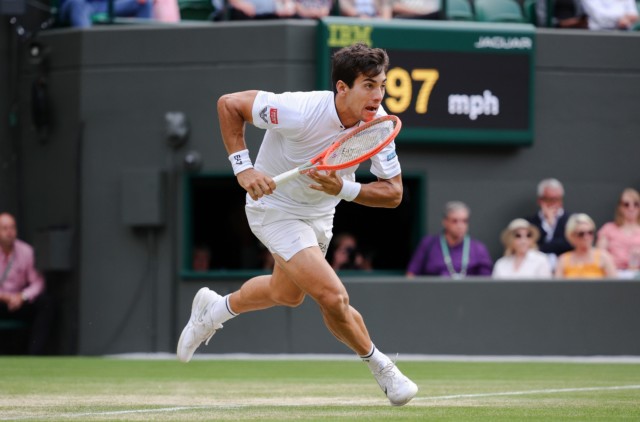 Garin was unable to cope with the Australian’s big hitting
In this article:grandslam, nickkyrgios, thefirst