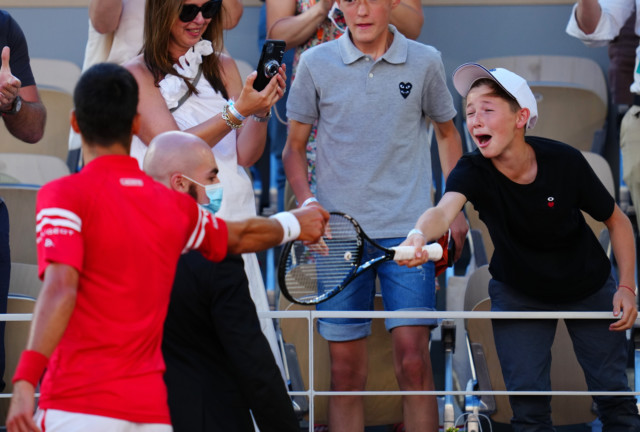 And then the Serbian targeted becoming the Head Boy of men’s tennis by doing the 2021 clean sweep.

The world No.1 came from two sets down for the first time in a major final to crush Stefanos Tsitsipas 6-7 2-6 6-3 6-2 6-4 in front of a raucous Court Philippe Chatrier.

Djokovic, who had a pep talk backstage at 2-0 sets down, was guided to Slam No.19 by a young French lad, who was rewarded with the tournament-winning racket.

He said: “This boy was in my ear the entire match. He was encouraging me.

“He was actually giving me tactics. He was like: ‘Hold your serve, get an easy first ball, then dictate, go to his backhand.’ He was coaching me literally.

“I found that very cute, very nice. Giving him the racket after the match was kind of my gratitude for him sticking and supporting me.”

The 30-year-old has the Australian and French Opens in the bag and if he wins at Wimbledon and the US Open, he will finally overtake great rivals Roger Federer and Rafa Nadal, who both have 20 majors.

Djokovic said: “I’m thrilled and very proud of this achievement.

“This probably ranks as the top three all-time achievements and experiences that I had in my professional tennis career.

“Everything is possible this year. Definitely in my case I can say that what I’ve been through in my career, in my life, this journey has been terrific so far. I’ve achieved some things that a lot of people thought it would be not possible for me to achieve.”

Shattered Djokovic, still recovering from that epic semi-final victory over Nadal, did not practice on Saturday and looked down and out as the Athens ace stormed two sets up.

Yet after a strategic bathroom break and a break of serve in an 11-minute lung-busting fourth game of the third set, Djokovic switched the momentum.

Tsitsipas, 22, started to hit unforced errors, the double faults count was rising, his one-handed backhand was misfiring and he required on-court treatment for a “hip blockage”.

The Next Gen, of which he is a prominent member, must continue to wait for that breakthrough success at the highest level.

Crestfallen Tsitsipas said: “I’m inspired by the things he has achieved so far. I hope one day I can do half of what he has done.

“Despite my loss, I have faith in my game. I very much believe I can get to that point very soon. I don’t have regrets.

“With the same attitude, I see no reason for me not to be holding that trophy one day.”