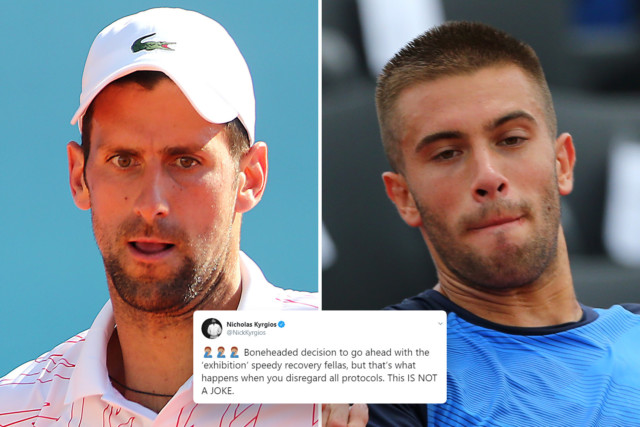 NOVAK DJOKOVIC was slammed as “boneheaded” by Nick Kyrgios for hosting a tennis event during a global pandemic and without social-distancing measures in place.

The Croatian leg of the World No.1’s Adria Tour was cancelled on Sunday after Bulgarian player Grigor Dimitrov revealed on social media he had tested positive for coronavirus.

And it has since emerged that a second player involved, Croatian Borna Coric, has also tested positive for Covid-19.

Coric said: “I wanted to make sure anyone who has been in contact with me during the last few days gets tested.

“I’m really sorry for any harm I might have caused. I’m feeling well and don’t have any symptoms.”

Last weekend, footage emerged of Djokovic and other players, including German Alex Zverev, singing, dancing topless and enjoying themselves in a nightclub post-tournament.

The event was held in Belgrade in front of large crowds and Djokovic even took time out to play the PIANO during the exhibition.

Yet the fallout from the positive tests has started to grow and the criticism has been led by Australian Kyrgios, who has been quite vocal against the US Open going ahead.

And he said on Twitter: “Boneheaded decision to go ahead with the ‘exhibition’ speedy recovery fellas.

“But that’s what happens when you disregard all protocols. This IS NOT A JOKE.”

Boneheaded decision to go ahead with the ‘exhibition’ speedy recovery fellas, but that’s what happens when you disregard all protocols. This IS NOT A JOKE. https://t.co/SUdxfijkbK

According to Adria Tour officials, Djokovic returned home but “didn’t feel any symptoms” and therefore did not go for testing.

The statement added: “(Novak) will contact the epidemiologist and he will continue the procedure with his doctor, according to the recommendations of the medical service.”