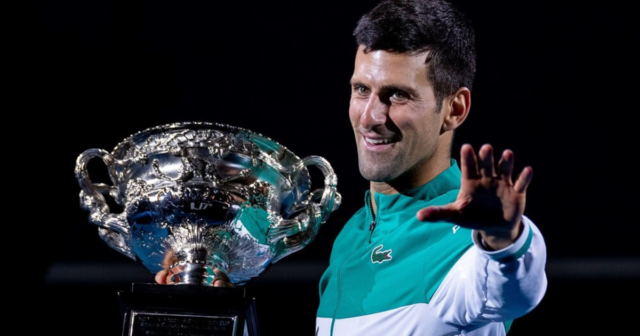 WORLD No1 Novak Djokovic WILL play at the Australian Open this month after controversially being given a Covid medical exemption.

The Serbian superstar would not reveal whether he has been vaccinated against coronavirus after initially saying he would refuse.

But doubts over his defence of the first Grand Slam of the year increased when tournament chiefs confirmed players would need to be vaccinated to compete.

And his late withdrawal from the ATP Cup in Sydney further suggested he would not be competing in Australia.

However, Djokovic has been granted a special pass allowing him to compete.

The nine-time champ wrote on social media: “I’ve spent fantastic quality time with my loved ones over the break and today I’m heading Down Under with an exemption permission. Let’s go 2022.”

He added a photo of himself with his tennis bag packed at an airport, ready to set off for the journey.

The decision has already sparked plenty of furious reaction among tennis fans and Victoria state residents, especially with the strict lockdown rules in Melbourne for much of the last two years.

The Australian Open gets underway on January 17.

Should Djokovic successfully go all the way in Melbourne, he will overtake Rafael Nadal and Roger Federer on to a record-breaking 21 singles majors.

Nadal, fit again after a foot injury, is already in Melbourne and has been practising with five-time runner-up Andy Murray.

Federer is absent, though, as he continues his recovery from knee surgery.

Did you miss our previous article…
https://www.sportingexcitement.com/tennis/emma-raducanu-could-struggle-under-huge-microscope-of-expectation-after-us-open-win-and-mbe-fears-legend-navratilova