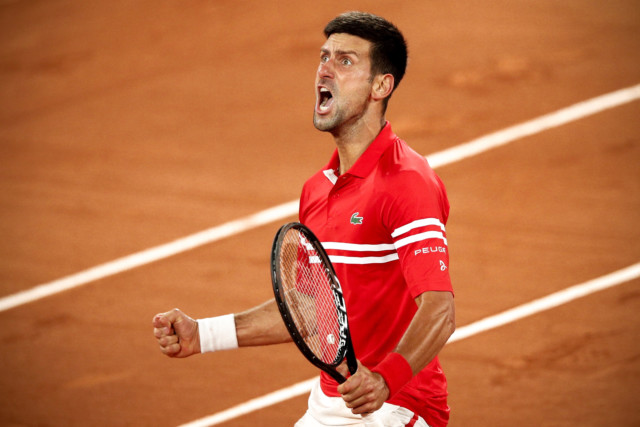 NOVAK DJOKOVIC earned a place in the French Open semi-final in an empty stadium after his match passed over a Covid curfew.

Some 5,000 fans were instructed to leave Court Philippe-Chatrier at Roland Garros after his game with Matteo Berrettini continued past 11pm.

Novak Djokovic booked a meeting with Rafael Nadal in the French Open semisThe 5,000 fans were kicked out before the finish due to a Covid curfew

The French Government has allowed fans to return to sporting events in limited numbers this week.

But a strict cut-off time clashed with an intriguing match-up in the tennis Grand Slam.

Djokovic, 34, has only ever won the French Open once and was dragged into a fourth set against the Italian World No9 on Wednesday night.

Having claimed the first two sets, the Serb was 3-2 up in the fourth when the 11pm curfew hit.

The players left the court after fans initially ignored instructions to head home, prompting chants of: “We are going to stay!”

The thousands of attendees were eventually cleared and Djokovic saw out the match 6-3, 6-2, 6-7 (5-7), 7-5 in front of empty seats, his bellicose roar echoing around the cavernous venue.

The quarter-final was the last evening session planned at this year’s Roland Garros and also the first to welcome back fans.

However, Djokovic was forced to wait to serve midway through the first game as one group arrived at the stadium carrying several bags of shopping – prompting boos from the more on-time locals.

Rafael Nadal had earlier booked his place in the final four with a four-set win over Daniel Schwartzman.

The clay court king will take on Djokovic in the semi-finals for the chance to face Alexander Zverev or Stefanos Tsitsipas for the crown.

Did you miss our previous article…
https://www.sportingexcitement.com/tennis/fran-jones-collapses-at-nottingham-open-and-is-left-needing-a-wheelchair-after-having-convulsions