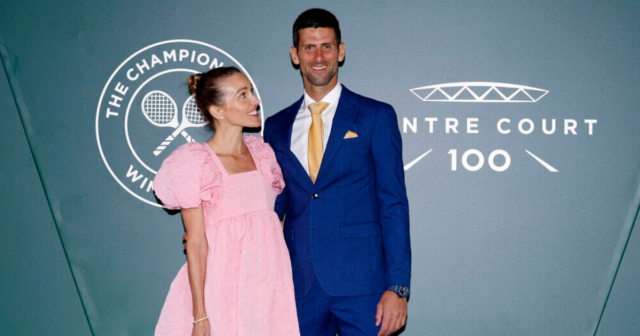 NOVAK DJOKOVIC’S wife Jelena has launched a furious defence of her husband after he was dubbed an “anti-vax posterboy”.

The Serbian ace, 35, stormed to his seventh Wimbledon title – and fourth in a row – by beating Nick Kyrgios on Centre Court on Sunday.

Djokovic bagged his 21st Grand Slam title and closed the gap on Rafael Nadal to just one.

But, current rules in America forbid the SW19 champion from competing in the US Open as he has not been vaccinated against coronavirus.

Djokovic does not consider himself to be an “anti-vaxxer” but has stated on many occasions that he does not want to accept the Covid jab.

Rothenberg said: “Unless there is a swift change in US immigration law, Wimbledon will be Djokovic’s last Grand Slam event of the year.

“US requires vaccination for foreigners to enter, and Djokovic has firmly said he has ruled out getting vaccinated, entrenching himself as an anti-vax posterboy.”

But furious Jelena took exception to the post and swiftly replied: “Excuse me. Just making sure that it is noted that YOU tagged him as antivax poster boy for whatever reason you have.

“He simply responded what HIS body choice is.”

Rothenberg was in no mood to let it lie, hitting back: “I understand that it’s his choice.

“But I also am saying that his decision to be so firmly against the vaccines that it limits his ability to play tournaments has made him, unwittingly or not, into a huge icon of the anti-vax movement.

“I saw this very clearly during the Australian Open.”

Angrily defending her husband, Jelena replied: “You are creating a very judgmental narrative that fits your agenda.

“He is simply choosing what’s best for his body. If he is not playing because of making that choice, he is fine with it.”

Rothenberg continued to fight his corner, adding: “I can accept judgmental.

“I believe every citizen, especially public figures, had a duty to act responsibly with public health actions and messaging during the pandemic, and as someone who has covered Novak as the influential champion he is, he repeatedly disappointed me deeply.”

A bitter Jelena concluded the row by responding: “Thank you for sharing your beliefs. I hope you don’t get judged for them. Or become a poster boy for hatred and bullying. You never know.

“You are also influential figure, please don’t continuously disappoint. Unless that’s your role.”

According to the latest UK Government statistics, the hospitalisation rates for those vaccinated against Covid is at least 76.3 per cent lower, based on those with just one jab.

The hospitalisation rate for double or triple-jabbed Brits who contract Covid is 83.1 per cent lower.

Djokovic has now admitted he is ready for a long summer holiday from tennis – with the Wimbledon champion refusing to go “ranking points hunting” or accept a Covid jab just to compete at Flushing Meadows.

He said: “I’m on vacation now. I’ll wait hopefully for some good news from the USA because I’d really love to go there.

“If that doesn’t happen, then I have to see what the schedule will look like.”

Djokovic has fallen four places in the world rankings to No7 as the ATP stripped Wimbledon of its ranking points over its banning of Russian and Belarusian stars following the invasion of Ukraine.

He added: “I doubt that I’ll go and chase points. I won’t burden myself to go and play tournaments and get points.

“In the last year, I achieved that historic weeks for No1 that I worked for all my life.

“Now that that’s done and dusted, I prioritise Slams and big tournaments and where I want to play, where I feel good.”

Djokovic went on to confirm he would not accept the jab, adding: “I’m not vaccinated and I’m not planning to get vaccinated.

“So the only good news I can have is them removing the mandated green vaccine card or whatever you call it to enter the United States. I don’t think exemption is realistically possible.”

His coach Goran Ivanisevic concurred, adding: “There is one movie back home called a ‘Long, Hot Summer’. This is going to be for me – a long, hot summer vacation.

“I going to have a vacation from today, I don’t know until when. Maybe US president Joe Biden will change his mind…”

But American legend John McEnroe has vented his fury, urging the US to allow Djokovic into the country to compete.

McEnroe said: “These politicians are getting in the way too much – they did it in Australia.

“Let the guy come in and play in the US. I mean come on. This is ridiculous.

“You can agree to be tested. There’s got to be a way around this.”

Advertisement. Scroll to continue reading.
In this article:grandslam, hewas, seventhwimbledontitle