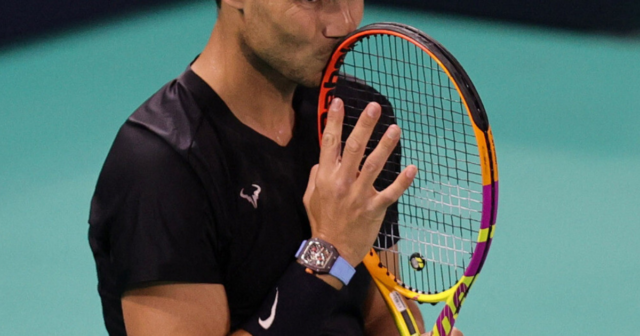 RAFAEL NADAL’S participation in the Australian Open is in doubt after he tested positive for Covid.

The world No6 has contracted coronavirus after travelling home from an exhibition in Abu Dhabi where he played Andy Murray last Thursday.

With player charter flights leaving for Melbourne before the end of this month, Nadal could well end up missing the first Slam of 2022.

The Spaniard says he is having ‘unpleasant’ symptoms and has informed close contacts about his positive test over the weekend.

The 20-time Grand Slam champion accepts that his calendar for the New Year has been completely disrupted, especially as the Aussie Open starts on January 17.

Nadal, 35, said on Twitter: “I wanted to announce that on my return home after playing the Abu Dhabi tournament, I have tested positive for Covid in the PCR test that was performed on me when I arrived in Spain.

“Both in Kuwait and Abu Dhabi we passed controls every two days and all were negative, the last being on Friday and having the results on Saturday.

“I am having some unpleasant moments but I hope that I will improve little by little.

“I am now homebound and have reported the result to those who have been in contact with me.

“As a consequence of the situation, I have to have total flexibility with my calendar and I will analyse my options depending on my evolution.

“I will keep you informed of any decisions about my future tournaments!

“Thank you all in advance for your support and understanding.”

Emma Raducanu collected her BBC Sports Personality of the Year award from a hotel room in Abu Dhabi – as she too is in isolation following a positive coronavirus test result.

Murray revealed on Monday that he plans to train at home before Christmas to avoid Covid crushing his dreams of playing Down Under next month.

The Scot, 34, missed a flight to Melbourne in January 2021 after testing positive, which he believes was a result of lax National Tennis Centre protocols.

The LTA – British tennis‘ governing body – said: “We have had special Covid protocols in place at the NTC over recent weeks.

“We are aware of a small number of cases relating to players during this time, but there is no evidence there is an outbreak centred on the NTC, rather than in the community.

“We remain open to allow players to prepare for the upcoming season but keep this and our protocols under regular review.”