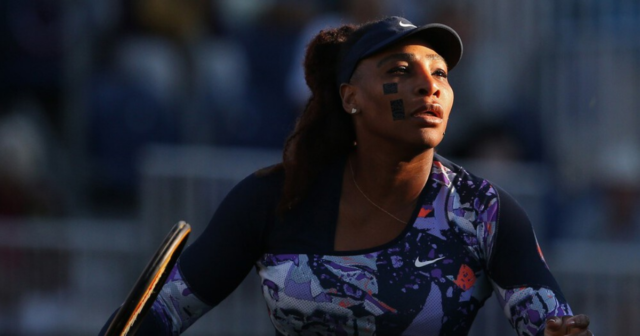 SERENA WILLIAMS has suffered a setback in her Wimbledon preparation.

The 40-year-old’s run in the doubles at Eastbourne is over after her partner was forced to pull out.

Tunisian star Ons Jabeur had to withdraw from the tournament on England’s south coast with a knee injury.

Williams and Jabeur had won their first two matches on the grass at Devonshire Park.

Wimbledon begins on Monday at SW19 and the withdrawal could have been cautionary.

Serena has accepted a wildcard into the event, which she has won seven times before.

She hasn’t played a competitive singles match in a year after tearing her hamstring on Centre Court in 2021.

Williams has fallen to 1,208 in the WTA world rankings due to her inactivity but there was never any doubt someone of her stature would be missed off the initial wildcard list.

She posted a photo of her white Nike trainers on grass and captioned it with: “SW (Serena Williams) and SW19. It’s a date. See you there. Let’s go.”

Tim Henman, who is on the committee board at Wimbledon, said: “It is a good selection on the women’s side.

“Serena requested one actually a couple of weeks ago and she is going to play down at Eastbourne.

“Hopefully she will get a good chance of getting in some grass-court preparation.”

Williams’s last major was the 2017 Australian Open – before she gave birth to daughter Olympia – and she has lost in four major finals since then.

She is only one major triumph away from equalling Margaret Court’s long-standing record of 24 singles Slams.

Advertisement. Scroll to continue reading.
In this article:onsjabeur, serenawilliams, thetournament