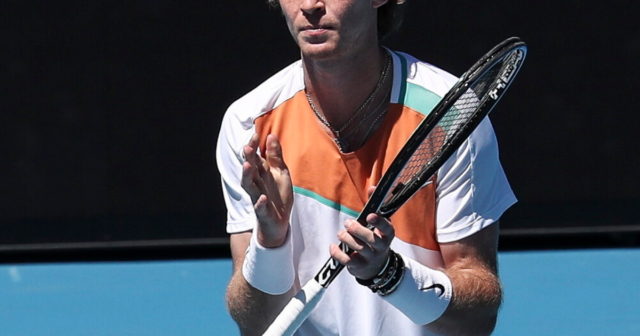 TENNIS star Andrei Rublev has revealed he was allowed into Australia with Covid despite the ugly Novak Djokovic row.

The 24-year-old Russian is set to face Marin Cilic in the third round of the Australian Open after beating Ricardas Beraknis.

And ahead of that match-up he has revealed how his own battle with coronavirus before the Grand Slam tournament left him uncertain on whether he would be in Melbourne.

But even though he was still positive for Covid upon his arrival Down Under, he was let in and is no longer being tested.

Speaking to Sport Klub, Rublev said: “I am not being tested personally now because I just got over the coronavirus.

“When I flew to Australia, I was still positive, but the level of Covid SS, as it is called, I will not lie, it was very low and not dangerous.

“I was allowed to enter the country. In addition, I spent more than ten days in quarantine.”

That revelation comes just days after Djokovic, 34, was deported following a humiliating vaccine row that rumbled on for almost two weeks – ending with him being barred from the country for three years.

The unvaccinated tennis ace claimed he had a visa exemption but was deported before the Australian Open.

Djokovic received a hero’s welcome when he landed in his homeland of Serbia on Monday and is now in talks with lawyers about suing the Australian government for £3.2million for ‘ill treatment’.

Djokovic said he was ‘extremely disappointed’ after three judges unanimously dismissed his last-ditch appeal to stay Down Under and chase a record 21st Grand Slam win at the Australian Open.

The government had cancelled his visa for the second time, saying they deemed the star’s presence in the country as a risk to the health and ‘good order’ of the Australian people while scuppering their vaccination efforts.

They were also concerned that the star’s decision to defy Covid rules in Serbia by attending an interview while knowing he was infected ‘may encourage an attitude of breach of public health regulations’.

A journalist who interviewed Djokovic for French outlet L’Equipe on December 18 said he was not told the star had coronavirus.

His positive test was given as a reason for an exemption to vaccine rules when he was granted a visa to play at the Australia Open.

But it emerged he greeted fans at three events while infected in December – potentially leaving him liable to a jail sentence for breaking the law in Serbia.

There were also questions about he got back into Spain where he was training before flying to Oz.

His visa application falsely stated he had not visited any other countries – an error he blamed on a manager for ‘ticking the wrong box’.

His family claimed he was detained in conditions like a prison with not enough food.

Djokovic may also be barred from the French Open in May and the US Open in August because he has not had the vaccine.

It is thought he could still be allowed to compete at Wimbledon – where he will try to top Roger Federer and Rafa Nadal’s tally of 20 Grand Slams each.

It has also now emerged that the tennis court legend has a majority stake in a drug company aiming to develop a non-vaccine treatment for Covid.