‘This is ridiculous’ – Djokovic should be allowed into America for US Open despite refusing Covid jab, insists McEnroe
Advertisement 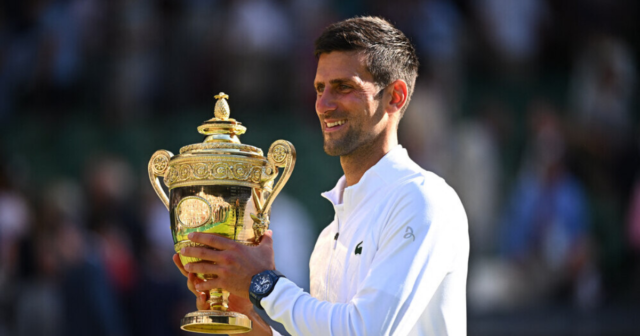 NOVAK DJOKOVIC should be allowed to play in the US Open despite refusing the Covid vaccination, says tennis legend John McEnroe.

The Serbian claimed his 21st Grand Slam title on Sunday as he beat Nick Kyrgios in four sets to clinch a seventh Wimbledon crown.

McEnroe feels Djokovic should be allowed to play in New York

Djokovic is now just one behind Rafa Nadal in the race to finish his career with more Slam titles than the Spaniard and Roger Federer.

But he was unable to play the Australian Open back in January due to his refusal to be vaccinated for coronavirus.

And the same could be the case for the US Open in New York later this year.

America’s current Covid restrictions clearly state that all non-immigrant and foreign travellers are required to show proof of full vaccination.

But McEnroe is urging president Joe Biden to relax the measures as the world begins to recover from the pandemic.

He said: “These politicians are getting in the way too much – they did it in Australia.

“Let the guy come in and play in the US. I mean come on. This is ridiculous. You can agree to be tested. There’s got to be a way around this.”

Despite the possibility of missing out on competing at the US Open, Djokovic has reiterated that he will not receive the vaccine.

He said: “I’m not vaccinated and I’m not planning to get vaccinated so the only good news I can have is them removing the mandated green vaccine card to enter the United States.

‘I’ll wait hopefully for some good news from the US because I would really love to go there. That would be the next big tournament.

‘If that doesn’t happen, then I have to see what the schedule looks like. I will not burden myself to have to go and play tournaments and get points.

“I don’t feel I’m in a rush really anywhere to end my career in a year’s time or two years’ time or whatever.

“I want to keep my body healthy… keep myself mentally sane and motivated to compete with the young guns.

“Everything that has followed Australia, particularly in the tournaments, has been a huge challenge and obstacle for me to overcome emotionally. I just needed time to weather the storm.”