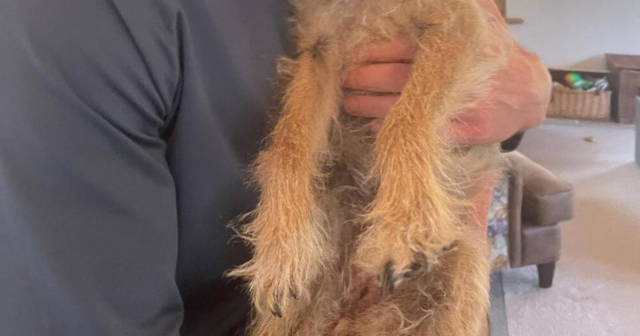 ANDY MURRAY has revealed his heartbreak after his beloved dog died during Wimbledon.

The Scottish star, a two-time winner of the prestigious SW19 Grand Slam, was knocked out of the tournament last week.

He suffered a second round defeat in four sets to American John Isner on Centre Court.

Now the 35-year-old has suffered more devastation after his prized-pooch Maggie May passed away.

Murray and his wife Kim have had Maggie, who was affectionately nicknamed “Maggie Mayhem” by the couple, back in 2008.

The pair, parents to four children, also added another dog named Rusty to their family in 2011.

The two border terriers became huge hits with his fans too after a Twitter account was created by the tennis legend in their honour.

However, now Murray and his loved-ones are mourning the loss of Maggie after he broke the devastating news to his social media followers last night.

Along with photos of him cuddling Maggie and a cute one of the pup lying down, he wrote: “Today our family said goodbye to this amazing little dog. She was a huge part of our family and our first pet so this really hurts.

“Give your pets a big cuddle tonight cause it stings when you can’t anymore. Thanks Maggie Mayhem you were an absolute star.”

Murray revealed last year to PetsPyjamas how his dogs help him to “switch off” from his highly-pressured job.

He said: “Sometimes I find it hard to unwind after a match or if I’ve had a particularly tough training day, but I love taking them for walks or throwing a ball for them in the garden, or even just sitting with them on the sofa –  I find that helps me relax.”

But following his Wimbledon exit, he admitted that being a good father to Sophia (aged six), Edie (four), his son Teddie (two) and their fourth child – another girl that arrived in the world in March 2021 – is his top priority.

He said: “Becoming a parent is life-changing and if it helps my tennis, great.

“And if it doesn’t, that’s fine. That’s not a problem for me now. My priority is to be a good father first.”