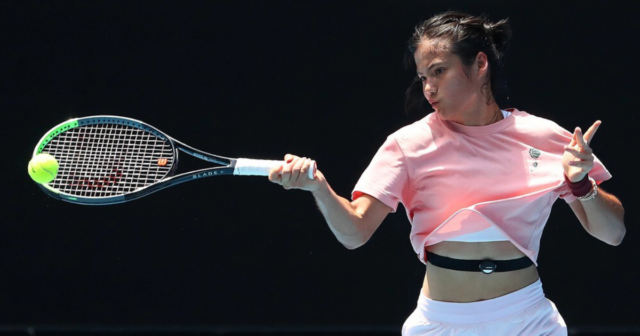 TIM HENMAN has called for patience as Emma Raducanu negotiates a first full season on the WTA Tour, stressing: Form is temporary, class is permanent.

The British No.1 was humbled 6-0 6-1 this week by Kazak Elena Rybakina in the first round of the Sydney International.

Raducanu has recorded two wins from her last five matches

It was the worst preparation imaginable for the Australian Open, which begins in Melbourne on Monday.

Raducanu, 19, tested positive for Covid before Christmas, spending time in self-isolation in an UAE hotel, and admits it has been a slower than expected recovery to fitness.

Henman, the former Wimbledon darling, was a confidante of Raducanu as she won the US Open last September in thrilling, spectacular style on her debut.

Her form since then has been mixed with just two wins from five matches.

Yet Henman, 47, told Eurosport that we cannot expect miracles every time she enters a major tournament.

He said: “Emma had a tough end to last year, she had Covid, she had to quarantine for 10 days, then when she came out she wasn’t really able to get started with training.

“Then she flies to Australia, the jet lag, and the practice and she’s just trying to build from that. I think it’s important that everyone manages expectations.

“It’s a long year, she’s got a lot of great opportunities, and form’s temporary, class is permanent.

“She’s just trying to build, get more and more matches under her belt.

“We’ve seen what she’s capable of, so just need to stay patient, keep working hard and the good results will follow.”

Raducanu returned to the practice court immediately after that smashing by Rybakina to work on the basics alongside new coach Torben Beltz.

The world no.18 has been drawn to face American Sloane Stephens, the 2017 US Open champion, at the Aussie Open.

Henman said: “I reflect on some of the other players like when you look at Coco Gauff or Jannik Sinner, it takes time, they’re enormous talents but you’ve got to be able to let them develop.

“When you see someone like Sinner, you see how well he played at the Tour Finals, he’s knocking on the door of the top 10, establishing himself, now we can see where he’s at.

“Emma’s played seven or eight tournaments in her professional career, she just needs a little bit of time.

“She’s slightly doing it back to front. She’s played in two Slams, and she won one of them. It’s crazy how quickly it’s all happened.

“There’ll be lots of people who will be impatient and expect things to turn and change overnight, but I’m not one of them.”

Advertisement. Scroll to continue reading.
In this article:Australian open, Wimbledon