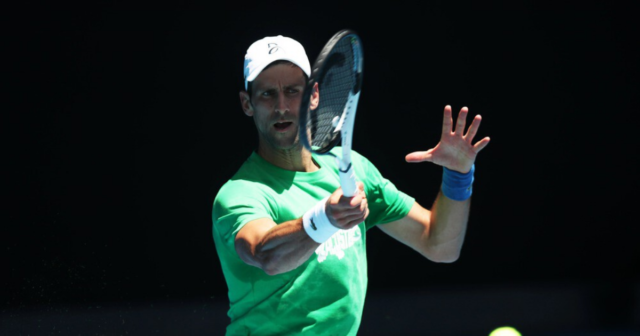 NOVAK DJOKOVIC has been accused of “playing by his own rules” and putting the Australian Open “at risk” because he remains unvaccinated.

World No 4 Stefanos Tsitsipas broke ranks in the locker room by criticising the defending champion ahead of the start of the tournament on Monday.

The Greek, 23, said: “He’s been playing by his own rules and has been doing what not many players had the guts to do.

“Especially after the ATP announced certain criteria for players to enter the country.

“No one really thought they could come to Australia unvaccinated and not have to follow the protocols.

“It takes a lot of daring to do and is putting the Grand Slam at risk, which I don’t think many players would do.”

Djokovic was drawn against fellow Serbian Miomir Kecmanovic in the first round of the Aussie Open.

The 34-year-old is trying to win Slam No 21 and overtake the record tally he currently shares with rivals Roger Federer and Rafa Nadal.

Yet overnight he was waiting to find out if immigration minister Alex Hawke would attempt to kick him out of Australia for a visa error.

The world No 1 had won a court appeal to stay in the country after border officials did not follow proper procedure. But then it was discovered there had been inconsistencies with his entry application.

If his visa is revoked again and he is eventually booted out of Oz, he would face the prospect of a three-year ban from Australia.

In the draw — which was delayed by more than an hour — Andy Murray was paired against 21st seed Nikoloz Basilashvili.

This comes a day after the Scot beat the Georgian in the Sydney Tennis Classic.

British No 1 Cameron Norrie will play American Sebastian Korda, who is in Covid self-isolation in Adelaide, while No 24 seed Dan Evans is up against Belgium’s David Goffin.

Murray and Evans will meet in the final in Sydney if they win their respective semi-finals today.

Australian world No 1 Ash Barty starts her quest for a first title at her home Slam against a qualifier, while Nadal is up against unseeded American Marcos Giron.