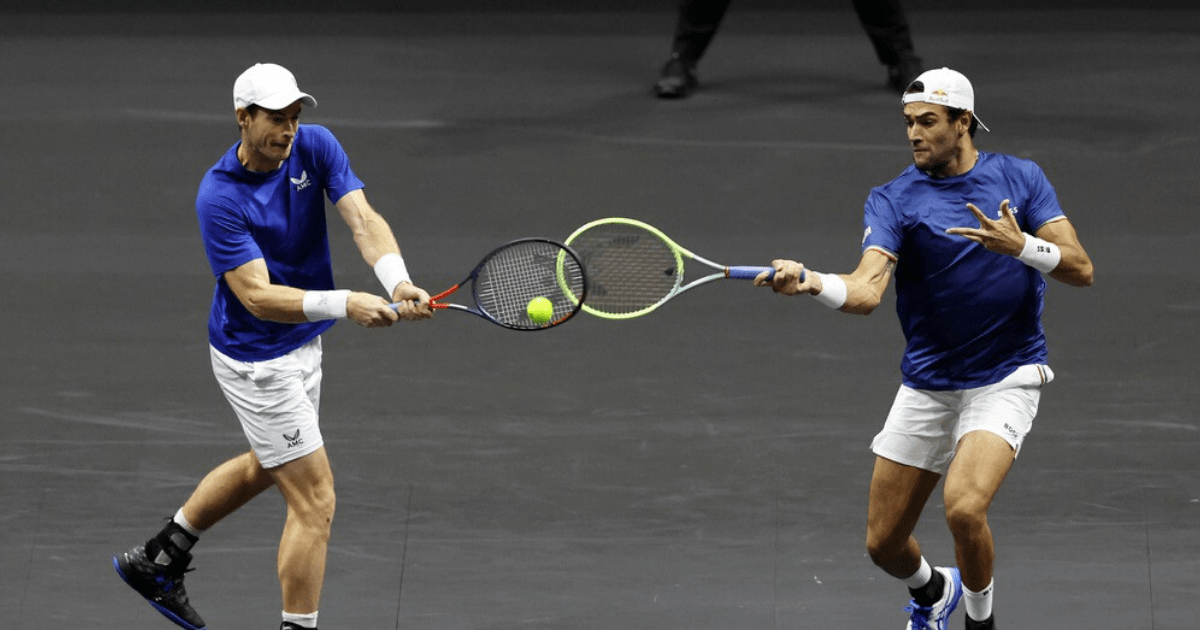 ANDY MURRAY ran into his doubles team-mate, fell over twice and cut his knee open – and still won the point.

The Brit teamed up with Italian Matteo Berrettini for Team Europe at the Laver Cup.

Murray tumbled to the court as Berrettini carried on 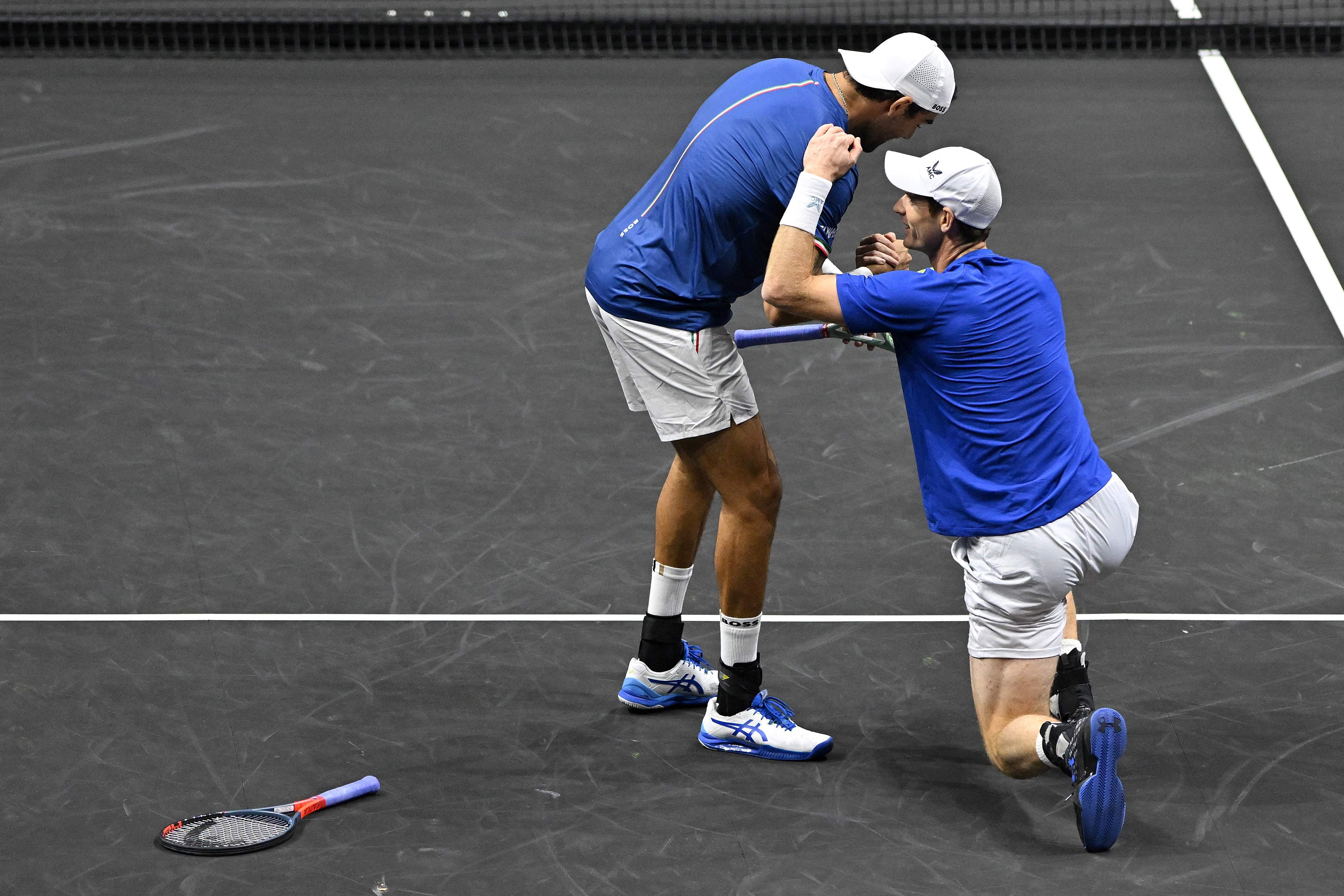 The Italian won the point and helped his team-mate up 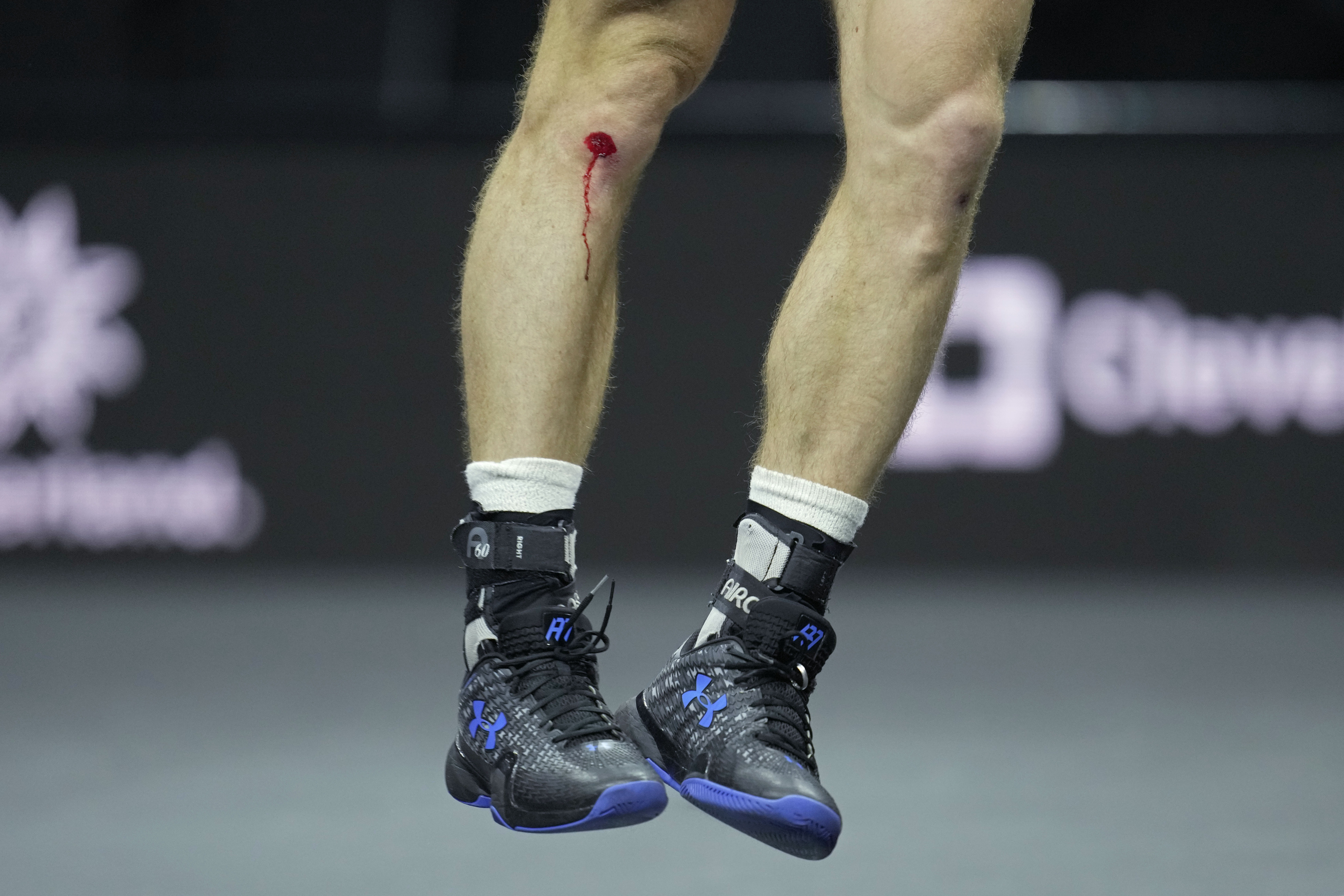 The fall saw the Brit cut his right knee open

They took on American Jack Sock and Felix Auger-Aliassime of Canada in the first match of Sunday’s team tennis tournament at the O2 Arena.

And the European duo made the perfect start as they won the first set 6-2 – thanks in part to a truly baffling point.

Murray, 35, returned Sock’s serve before the Brit’s simple backhand to get the rally going.

But when the ball came down the middle, Murray went for a backhand and his new partner Berrettini tried to unleash his booming forehand.

In the end, the two-time Wimbledon champ got his racket to the ball but the pair collided, sending Murray tumbling to the floor.

Auger-Aliassime volleyed short as Hugo Boss model Berrettini left his stricken pal down to carry on the point as he nailed the drop shot for a winner.

But as Murray tried to get back to his feet, he toppled over again and sent himself sprawling across the hard surface.

The former world No1 did get himself up and was smiling – but looked back to find a piece of his skin on the floor.

Murray picked it up and took it off court as the blood started to pour from his knee.

Retired Roger Federer grimaced backstage as he watched his friend hurt himself.

The Swiss maestro came out to join the bench to get there for the next changeover.

Murray said: “My skin is on the court here, it’s nice.”

Federer then joked to the medic patching Murray up: “Gentle. This is SIR Andy okay? Be gentle with him.”

One fan wrote: “Andy Murray sacrificing his body to try and get points for Roger Federer’s team at his retirement tournament. Absolute king.”

Despite taking the first set, Murray and Berrettini lost on a match tie-break as Team World pulled themselves back into the Laver Cup. 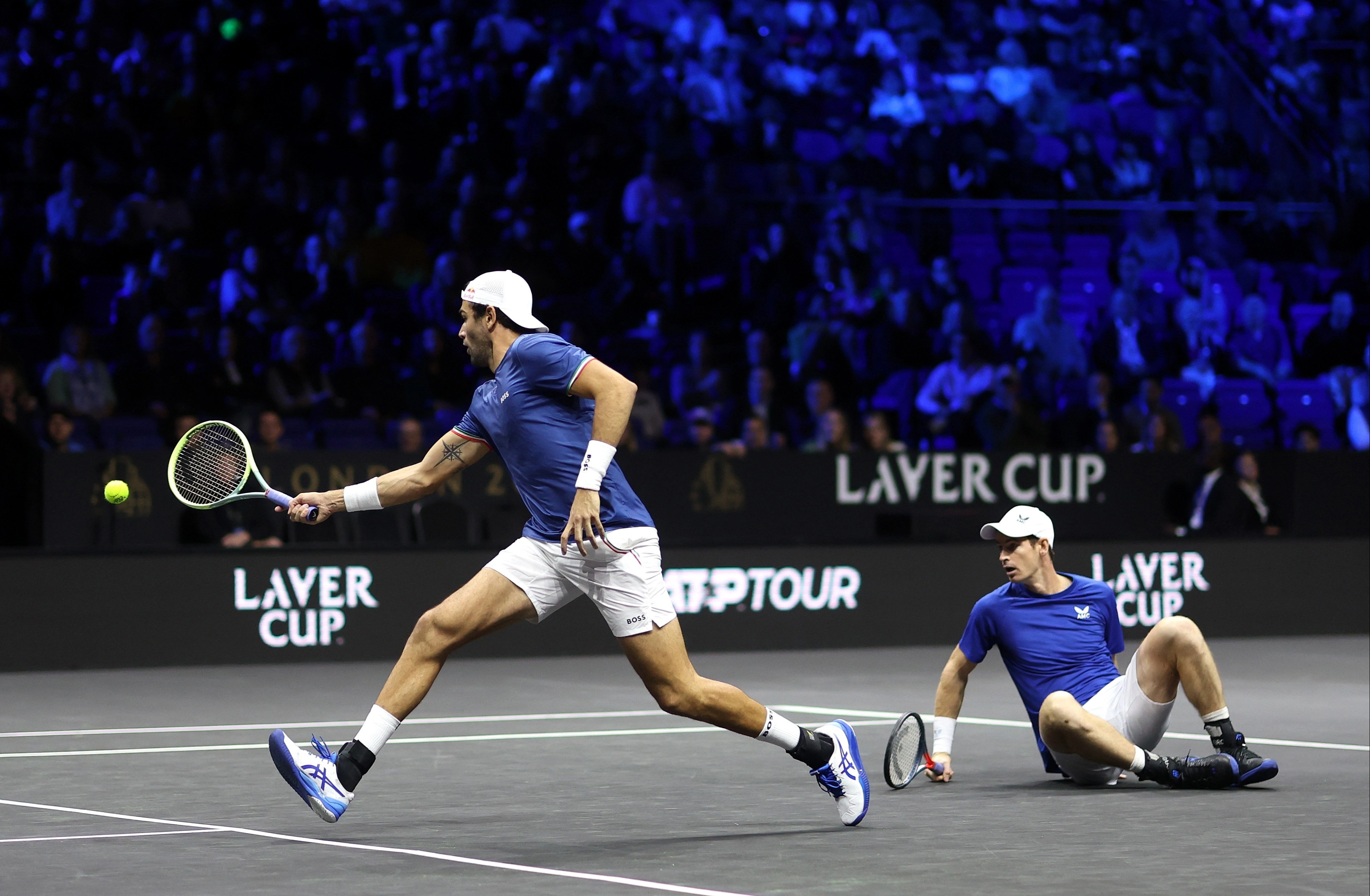 Murray was left stricken on the court after the collision 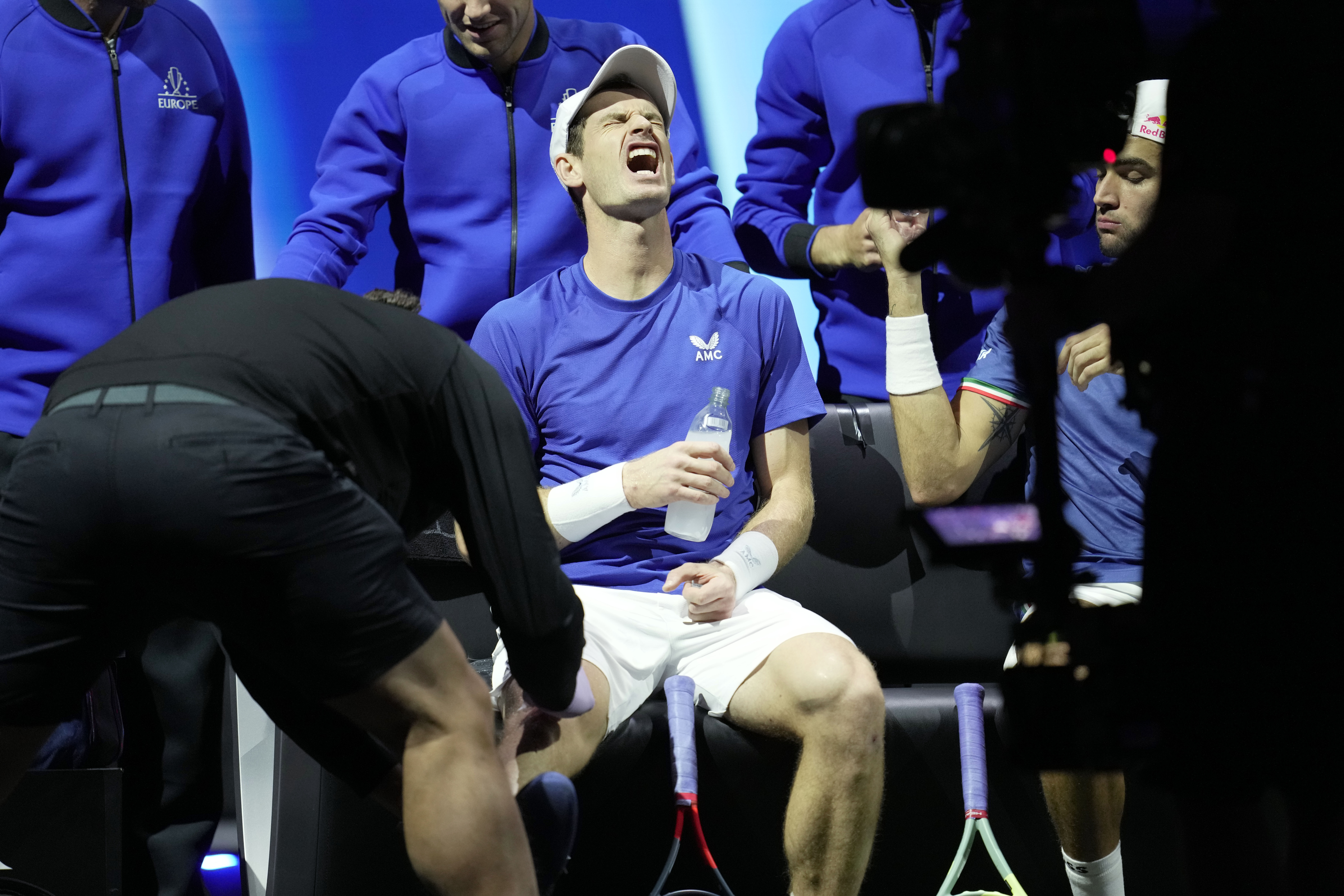 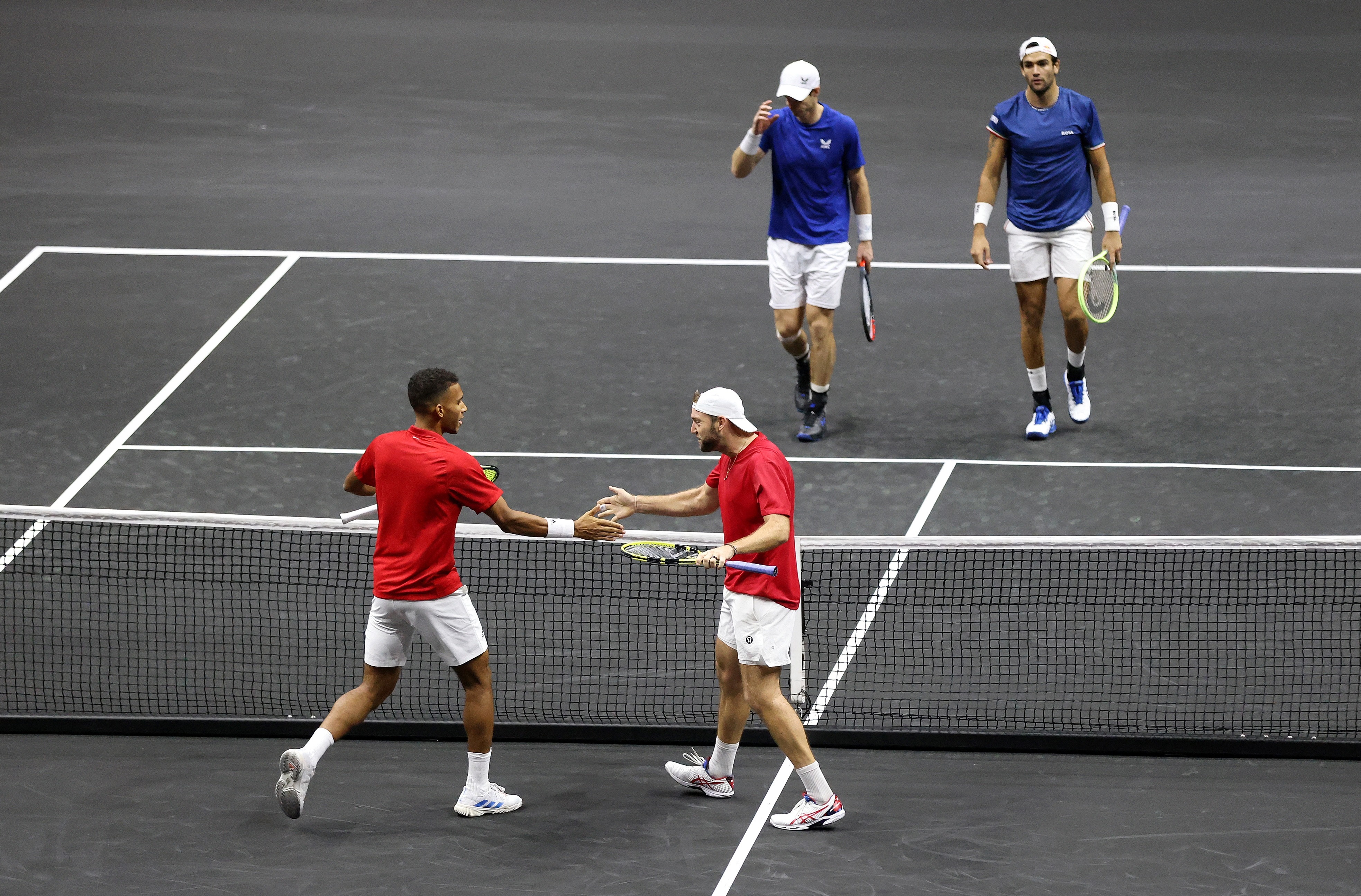 Advertisement. Scroll to continue reading.
In this article:eachother, lavercup, winpoint