Who is Ash Barty’s fiance Garry Kissick and does Wimbledon champion have children with pro-golfer?
Advertisement 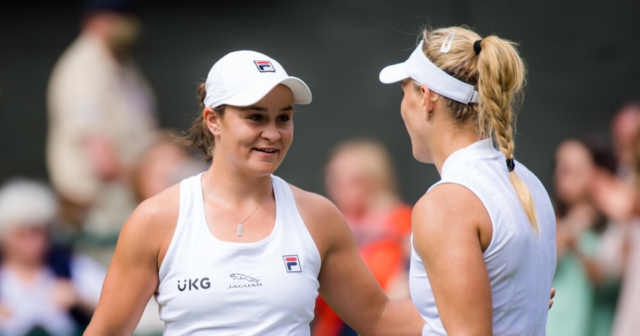 WORLD number one Ashleigh Barty is looking for glory on home soil in the Australian Open final.

There, she will be supported all the way by boyfriend Garry Kissick, who comes from a sporting background himself.

And whether she wins or not, she will have even more to look forward to this year as the couple announced in November 2021 that they will be getting married.

Garry Kissick is an aspiring professional golfer who works as an irrigation technician for the greens of the Brookwater Golf & Country Club in Brisbane.

Not too much is known about him, but he is a keen Liverpool fan and part of the PGA trainee programme.

The couple met in 2016 when Barty visited Brookwater to play a round of golf.

A year later, they made their relationship public when they attended the John Newcombe awards together.

Kissick also helps Barty out during practice whenever she can, becoming known as her unofficial ball boy.

A friend told Women’s Day in 2019: “They’re really the most normal couple you’ll find at that level in tennis.

“It’s refreshing because you often see mismatched liaisons in this sport.

“It’s funny to watch Ash practising at the big tournaments with her coach and see Garry pop up as the ball boy. He’ll skip back and forth, helping out between their rallies, encouraging her by passing on cricket scores or cracking jokes.

“Without even meaning to, Garry helps Ash play her very best tennis, because there’s certainly no pressure from him.”

Does Ashleigh Barty have any children?

In 2020, Ashleigh Barty brought a baby to her press conference following her Australian Open semi-final defeat against to Sofia Kenin.

However, she is not yet a mother herself.

Barty said of baby Olivia: “It’s my newest niece. My sister just had her about 11, 12 weeks ago. Yeah, this is what life is all about. It’s amazing.

“It’s been a hell of a summer.

“I mean, if you would have told me three weeks ago that we would have won a tournament in Adelaide, made the semifinals of the Australian Open, I’d take that absolutely every single day of the week.

“[Olivia] brought a smile to my face as soon as I came off the court. I got to give her a hug. It’s all good.”