Who is Leylah Fernandez? Emma Raducanu’s US Open final opponent whose teacher told her to give up tennis
Advertisement 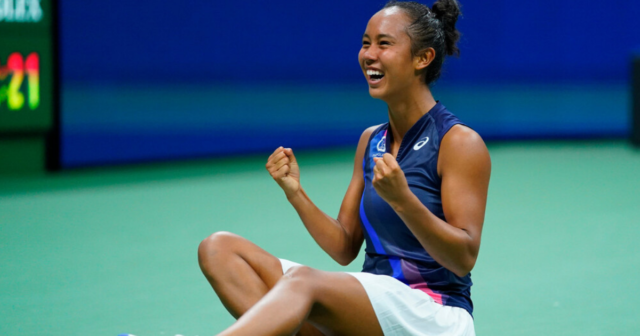 EMMA RADUCANU is one match away from becoming a grand slam winner at just 18.

But standing in her way in the US Open final is another teen sensation – Leylah Fernandez.

The 19-year-old from Canada has already caused a stir by knocking a number of favourites out of this year’s tournament.

Here’s all you need to know about her.

Who is Leylah Fernandez?

Leylah Fernandez was born in Montreal, Canada in 2002 to an Ecuadorian father and a Filipino mother.

Her younger sister Bianca Joelie is also a tennis player while her older sister Jodeci is a dentist. Fernandez’s paternal grandparents are Peruvian.

She can speak English, French and Spanish fluently.

While growing up, Fernandez had a teacher who told her to focus on school because she would never become a professional tennis player.

The Canadian said after beating Sabalenka: “A lot of people doubted me, my family and my dreams.

“They kept saying no, that I’m not going to be a professional tennis player, that I should stop and just pursue going to school.

“I remember one teacher, which was actually very funny – at the time it wasn’t but now I’m laughing.

“She told me to stop playing tennis, you will never make it, and just focus on school.

“You know what, I’m just glad that she told me that because every day I have that phrase in my head saying that I’m going to keep going.

What is Leylah Fernandez’s tennis record?

In 2020, she made it to the third round of the French Open, which was as far as she had progressed at any grand slam until her run to this year’s US Open final.

Fernandez is currently ranked 125 in the world, slightly above Raducanu’s 150.