Will Nick Kyrgios get a BYE into the Wimbledon final if Rafael Nadal is injured, or can Taylor Fritz be reinstated?
Advertisement 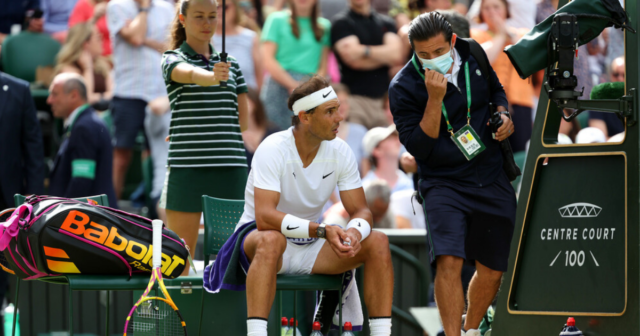 Though the victory for Spanish legend may have come at a huge cost for the record Grand Slam winner.

Rafael Nadal received a medical time-out in his stunning win

Nadal played through the pain barrier to seal the phenomenal win, having to get treatment in a medical time-out for an abdominal injury.

The star even ignored pleas from his family to QUIT the four-hour 21-minute epic on Centre Court.

When asked if it was possible to recover in time for the semis, Nadal replied: “I don’t know. I’m going to have some more tests.

Will Nick Kyrgios get a bye into the final?

If Rafael Nadal is forced out of Friday’s semi-final with injury, Nick Kyrgios will in receive a walkover to advance into the final.

Taylor Fritz will not be reinstated into the tournament, as he is already out.