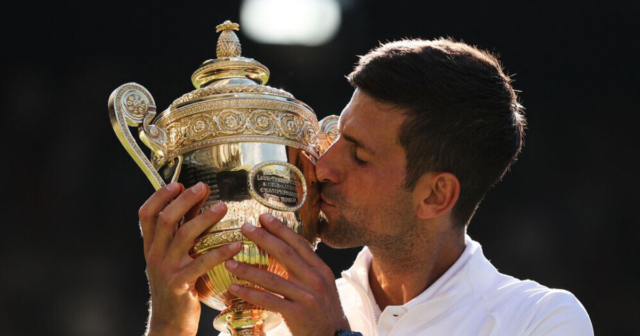 NOVAK DJOKOVIC and Elena Rybakina are the 2022 Wimbledon singles champions.

And both stars will walk away from SW19 with a whopping £2MILLION for their fortnight of work.

Djokovic beat Nick Kyrgios to win his fourth Wimbledon title in a row and seventh overall to take his Grand Slam tally to 21 – just one shy of Rafael Nadal.

Rybakina, like Djokovic, was forced to fight from a set down to lift the famous trophy.

She beat Ons Jabeur to be crowned Wimbledon champion for 2022.

And both pocket £2m apiece, with All England Club chiefs awarding the same pay for the Gentlemen’s and Ladies’ draws since 2007.

Losing finalists Kyrgios and Jabeur will hardly go short though, with both earning themselves a bumper £1.05m pay-day.

And for reaching the semi-final – where he lost to eventual champion Djokovic – the No9 seed earned £535,000.

Quarter-finalists, such as Taylor Fritz – who lost to Nadal before he pulled out with injury – pocketed a cool £310,000.

Heather Watson reached the fourth-round in impressive manner as the Brit walked away with £190,000.

Third-round finishers earned £120,000, while second-rounders – including Andy Murray and Emma Raducanu – were awarded £78.000.

Two-time champion Murray lost to American John Isner in a thrilling match as he continues his comeback from hip surgery.

Raducanu continues to struggle since her historic US Open triumph in September, which earned her £1.8m and millions more in endorsements.

For half of entrants, they earn £50,000 just for qualifying.

Of the 256 singles players across the Gentlemen’s and Ladies’ draws, 128 are knocked out – but they all go home with what for some is a career-changing amount of money.

In this article:elenarybakina, grandslam, walkaway