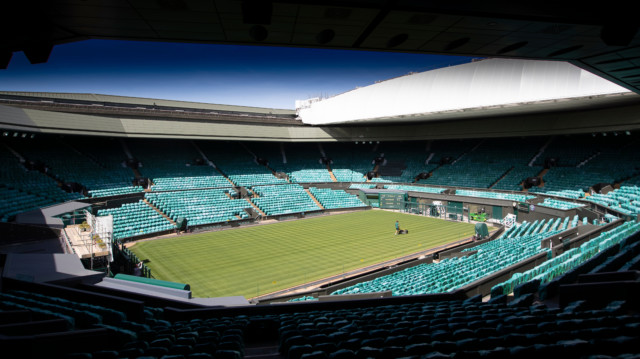 WIMBLEDON bosses are planning to stage a “reduced capacity Championships” this summer.

The tennis major was cancelled in 2020 for the first time since the Second World War due to the impact of the global Covid-19 pandemic and nationwide lockdown rules.

Wimbledon could be played without fans this year

In what proved to be a shrewd move, the AELTC had taken out pandemic insurance policy in 2003 for infectious diseases following the SARS outbreak.

It is believed they received a payout worth more than £100milllion despite the cancellation.

There is no such clause this time but following the successful completion of the US Open (behind-closed-doors) last September and the French Open (1,000 maximum daily crowds) last October, there are workable templates in place for staging Slams in these unusual times.

Tennis chiefs want to “stage the best Championships possible” with the health and safety of all guests, staff and competitors their “highest priority”.

Less than five months until the start of the Championships on Monday June 28, Wimbledon admit the event “will likely look very different this year”.

Wimbledon have three scenarios in mind: 1) a full capacity Championships; 2) a reduced-capacity event; and 3) moving it ‘behind closed doors’.

They say “the majority of our planning focus is currently centred on the option of a reduced capacity Championships and how that would affect each stakeholder group, but we aren’t yet in a position to rule out any of the other scenarios”.

It is not known exactly how many fans will be permitted to attend per day but it is likely social-distancing rules will apply and there could be one-way systems for the grounds.

In a statement, Wimbledon added: “While the roll-out of the vaccination programme in the UK is a very heartening development, it naturally remains too soon to know how this will impact public attendance at major events in the UK.

“Our approach will be to remain as agile as possible and leave enough flexibility in our planning to adapt as required to the prevailing conditions in the summer.

“We are also working collaboratively with DCMS and the major sports events and bodies in the UK to share information on the latest developments with the aim of ensuring best practice is understood and achievable.”

Serbia’s world No.1 Novak Djokovic beat Roger Federer in the 2019 final after nearly five hours of action – it was the longest men’s singles final in SW19 history.

Romanian Simona Halep is the reigning women’s champion, having shocked American Serena Williams in the battle for the Venus Rosewater Dish more than a year-and-a-half ago.