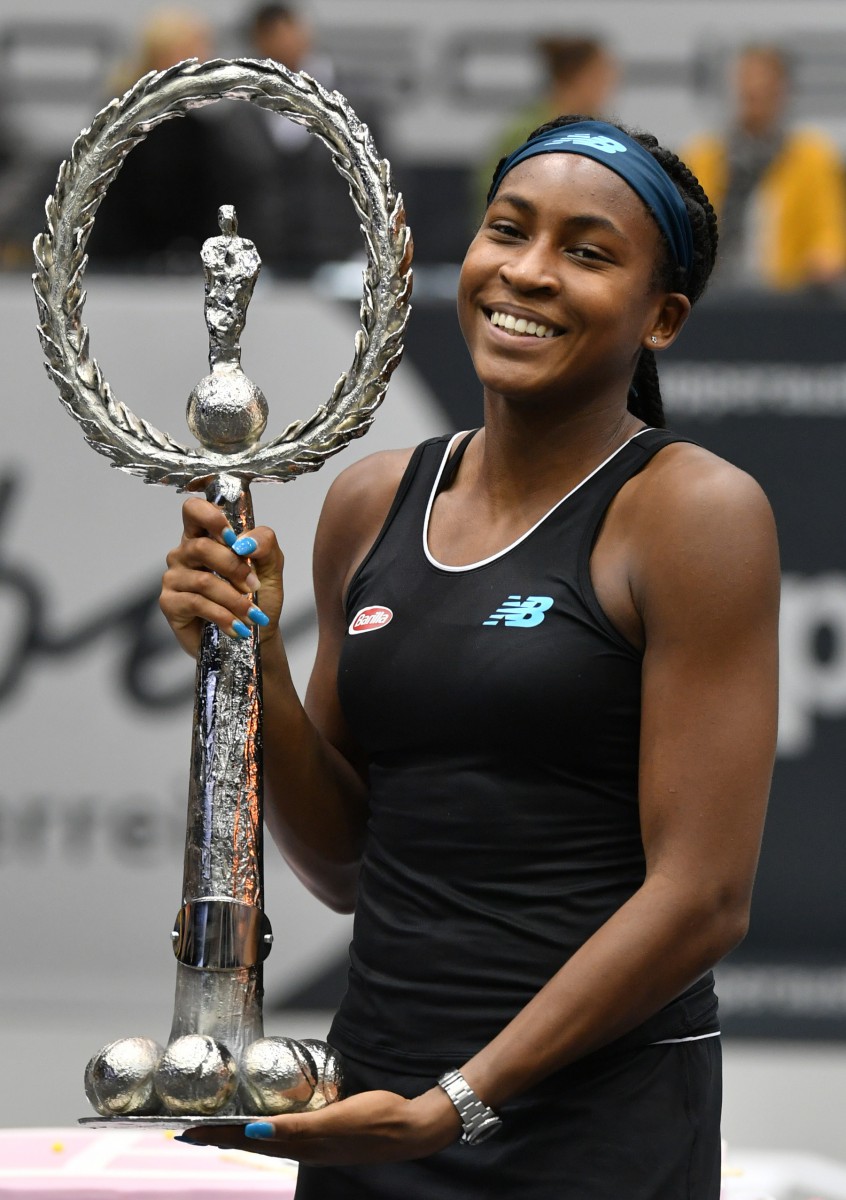 COCO GAUFF became the youngest winner on the WTA tour for 15 years with her first singles title.

And her tender years were highlighted when a TV presenter went to hand her a bottle of wine to celebrate the victory before remembering she was under the legal age limit.

She beat former French Open champion Jelena Ostapenko 6-3 1-6 6-2 in the Upper Austria Ladies final in Linz and will break into the world’s top 100 for the first time.

After dropping the first set, Ostapenko battled back in the second to level things up.

But a line call went against her early in the decider and she imploded, slipping 5-0 down.

Gauff let two championship points go but her dad Corey came on and said: “Were not going to sprint to the finish line. Were going to walk to it. If you had 5-2 this time yesterday youd have taken it.”

And the pep talk worked its magic as his daughter then closed out the win in the very next game.

During the celebrations Gauff was presented with a bottle of wine by a TV presenter Barbara Schett-Eagle, who was wearing a traditional Austrian dress.

After an awkward laugh, Schett-Eagle held on to the booze instead of handing it over to the teenager who falls under the legal limit of 16 in Austria.

Gauff is now expected to rise to 71 in the world rankings when they are updated tomorrow.

She said: “I want to thank God for always supporting me like I wouldnt be here without him. Its been an amazing week and I hope to come back in the future.

“Ill definitely remember this moment for the rest of my life.”

“I'll definitely remember this moment for the rest of my life.”

Earlier in the week she took out world No8 Kiki Bertens and former top-ten star Andrea Petkovic en route to the final.

But this all comes after the American sensation was a lucky loser following a defeat in qualifying in Austria before being called in at the last minute.

But Gauff took full advantage to sweep aside all in her way to reign supreme and win what will surely be the first of many career titles.

The Florida teenager was born in 2004 – the same year that Nicole Vaidisova, then 15, won titles in Vancouver and Tashkent.

And she is the first American woman to win a tour-level singles title since 1991, backing up the doubles title she won with Catherine McNally in August.

In comparison, Serena and Venus Williams were both 17 when they picked up their first pieces of silverware.

Youngster Coco broke on to the scene with her stunning run at Wimbledon in July and is tipped by many for greatness.

Gauff dumped Venus out in her first senior Grand Slam match at SW19 and reached the fourth round before being outclassed by eventual champion Simona Halep.

And she backed it up at her home US Open reaching the third round but was knocked out by defending champion and then-world No1 Naomi Osaka before the Japanese star invited the youngster to join her for an emotional on-court interview.

[email protected] gets acquainted with her first WTA