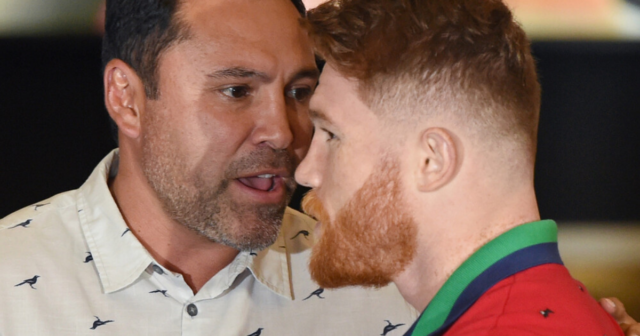 OSCAR DE LA HOYA wants to fight Canelo Alvarez and taunted that his former Golden Boy star has ‘only power’.

The promoter worked with Canelo from 2010 until the Mexican superstar terminated his Golden Boy contract last year.

It saw their relationship turn sour, so much so that De La Hoya has called out the four-division champion.

And he takes confidence from the fact Canelo, 31, lacks the same speed that Manny Pacquiao posses and ultimately sent him into retirement in 2008.

He said: “Why not? Why not? It’s only power. That’s all it is. Power I can withstand.

“Speed, like Pacquiao, is a whole different story. Power, power – I have a good chin.”

De La Hoya, 48, made the astonishing comments at the press conference to promote his comeback fight against Vitor Belfort, 44, set for September 11.

The pair were initially set to box in an exhibition bout, but it will now be a professionally sanctioned contest at the Staples Center in Los Angeles.

It has been approved by the California State Athletic Commission.

It will also be at 180 pounds, but De La Hoya and Belfort can weigh within five pounds of the limit.

Triller will promote the event as part of their ‘Fight Club’ banner, which has also featured YouTuber Jake Paul, 24, and Mike Tyson, 55, previously.

In the 13 years since, he has focussed on his Golden Boy promotions banner.

But after watching Mike Tyson, 55, come out of retirement after 15 years, later drawing in an exhibition with Roy Jones Jr, 52, it inspired De La Hoya.

But the Brazilian – who is 1-0 as a boxer winning his debut in 2006 – recently linked up with Triller to pursue boxing.