Five next fights for Tyson Fury including Joshua, Ngannou and McIntyre after win over Dillian Whyte
Advertisement 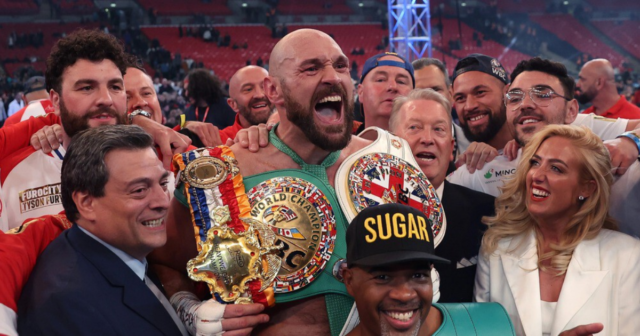 TYSON FURY insists he will not be stepping back into the ring – but there are still plenty of big matches out there for him.

The Gypsy King stretched his unbeaten record with another impressive display at Wembley on Saturday.

The Ring and WBC heavyweight world champion destroyed Dillian Whyte with a brutal uppercut to claim the win in the sixth round.

Fury, 33, reiterated afterwards that he was going to retire from boxing, but many still believe he could be tempted to put the gloves back on at least one more time.

And he even teased two bouts outside of Queensbury Rules.

Here are five potential opponents that we could see him face: 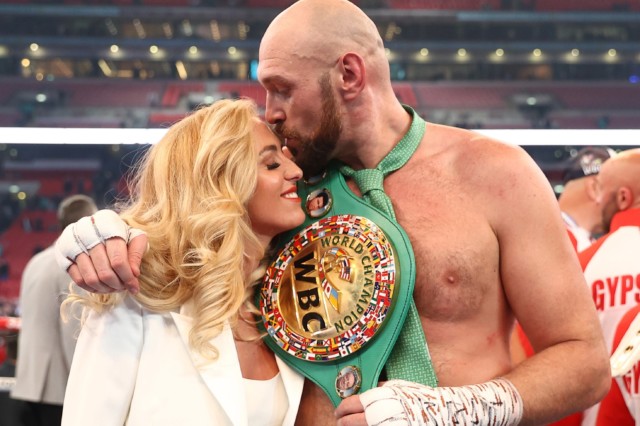 He came so close to what would be one of the biggest bouts in British boxing history last year before Deontay Wilder won his court battle for a trilogy fight.

Joshua is currently focusing on his rematch with Oleksandr Usyk – but if he regains the WBA, IBF, WBO and IBO titles then a massive unification fight could be on the cards.

Fury has never held back in his “bodybuilder” jibes at AJ either – and even if the Watford warrior loses to the Ukrainian then there would still be mega-money on offer for the two to square-off.

And last night’s 94,000 attendance at Wembley could be topped if the two men do get it on in the UK.

The 35-year-old eased to victory over Joshua in September and, after helping battle Russian troops in his homeland, he is looking to do the same again this summer.

Fury says he is not interested in being “undisputed” champ, but even his wife Paris says she believes that is the only thing that would entice him back.

So it’s over to Usyk and AJ…

The UFC’s first African-born heavyweight champion was in attendance last night before The Predator made his way into the ring moments after the fight, further teasing a transition into boxing.

And the pair quickly began talking up a showdown during a joint interview with ESPN, with Fury saying: “Going to be an explosive fight when it happens.”

Ngannou then said: “We’re going to find out who the Baddest Motherf***er on the Planet is?”

And he’s confident a fight with Fury will materialise next year, telling BT Sport: “Definitely sometime next year. 2023. That fight will happen!”

“Because by the end of the year, to know exactly [where I stand], we’re going to sort it and get settled and ready to go.”

He added: “Tyson Fury vs Francis Ngannou in Africa, that would be the best one. The Rumble in the Jungle 2!”

The Gypsy King vowed a switch to wrestling following last night’s stunning win and is planning another WWE appearance.

Fury has fought once in the WWE before – a count-out win over Braun Strowman in Saudi Arabia back in 2019.

The 33-year-old revealed after beating Whyte last night that he is planning talks with WWE chief Vince McMahon, and wants to fight at SummerSlam.

Fury told GiveMeSport: “Don’t rule me out of fighting there. You might see me at SummerSlam, coming up soon.

“I’ve got to speak to Vince and the boys, maybe make this happen. I know Drew McIntyre has been saying a lot of things about me, I’ll have to knock him out, like I did his pal.”

OK, this is a long shot and Fury already has two victories over Del Boy.

But cheeky Fury could not resist trolling Chisora after his win over Whyte – by offering the boxer a new house.

Chisora, who has lost to both the Gypsy King and the Body Snatcher, fancied Whyte to beat Fury.

So much so, in fact, that he was willing to bet his house on Whyte knocking out the heavyweight world champion.

Before the fight Chisora and heavyweight rival Joseph Parker jokingly bet their houses against each other, with Parker backing Fury for the win.

So after defending his world title belts again Fury said in his press conference: “Derek Chisora is now homeless, sorry to everybody, he lost his house to Joseph Parker, so unlucky.

“And Derek, I have got a house next to my house in Morecambe, you are welcome in it any time brother.

“But the moral of the story is never bet your house on something unless you’re one million per cent sure, and you can never be sure in the heavyweight division.

“So now he’s homeless, good luck to him.”

And if he fancies an easy payday and farewell fight then he could decide to take on his old rival one more time.

Advertisement. Scroll to continue reading.
In this article:dillianwhyte, forhim, tysonfury