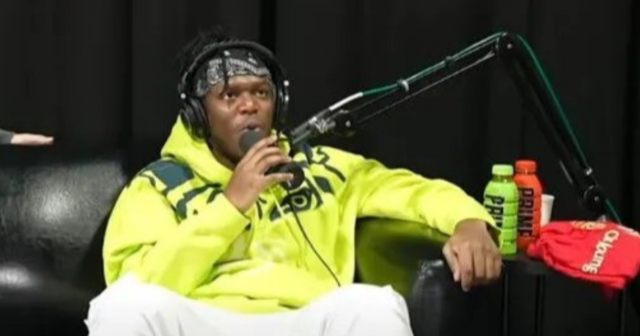 BRITISH YouTube star KSI has slammed Jake Paul as a c*** – in front of his brother Logan.

KSI has patched up his differences with Logan after they shared the boxing ring twice.

The first fight was amateur and was scored a draw, with KSI winning the second as a pro.

The social media stars have since teamed up to launch an energy drink. But while things appear cool between them, KSI is not too kind about Logan’s younger brother Jake.

“The way he knocked out Tyron Woodley, stupid.

“People are saying it’s fake, it’s not fake, he cleaned him out and it was a great shot.

Jake has won all five of his pro boxing fights so far, four by way of KO. But purists continue to pour scorn on his achievements having not fought ‘a real boxer’ yet.

Talks are continuing to get the Tommy Fury grudge match back on – the Love Islander had to pull out with injury with Woodley stepping in and getting flattened.

But KSI seems happy to throw his own hat in the ring, despite recently saying he was ‘retired’.

The 28-year-old added: “I know everyone’s always going, ‘Shut the f*** up KSI, you haven’t been in the ring for so long, you’re not gonna be able to beat Jake Paul.’

“But then I go, ‘Styles make fights.’

“If you find a certain person Jake is just horrible against and he’s had less experience than Jake, he’s still gonna beat Jake because he knows what works against Jake.

Did you miss our previous article…
https://www.sportingexcitement.com/boxing/anthony-joshua-set-to-make-announcement-on-new-trainer-ahead-of-oleksandr-usyk-rematch-according-to-eddie-hearn