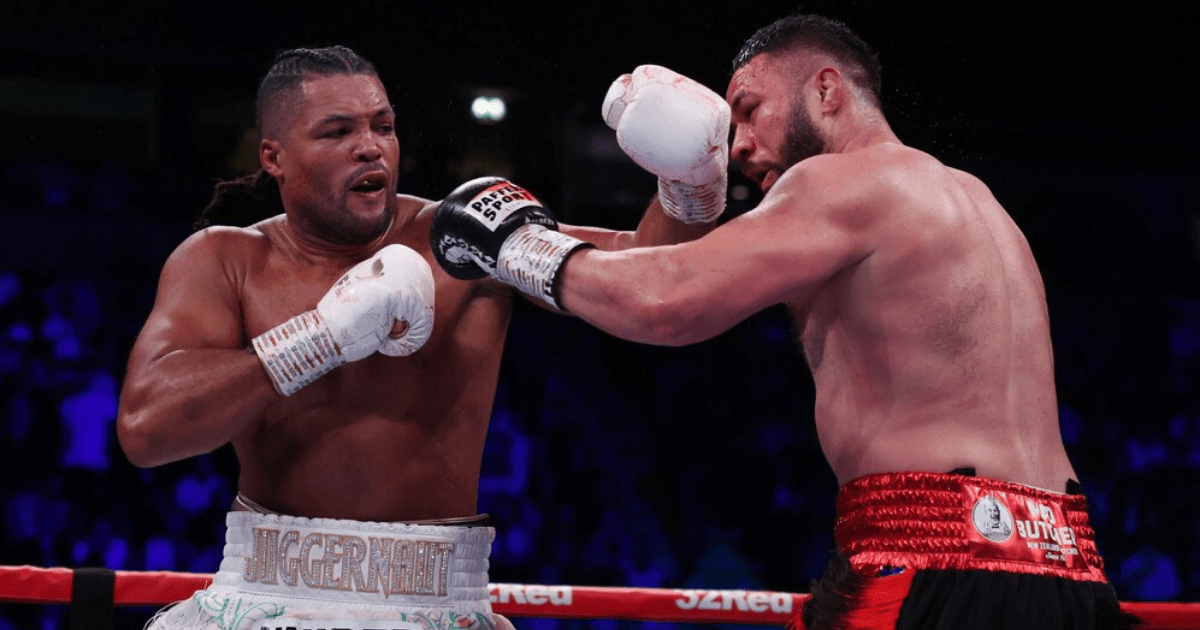 JOE JOYCE scored a stunning KO win over Joseph Parker after breaking his nose and spirit in a bloodbath of a fight.

The Rio 2016 silver winner took another step toward a world title shot by pummelling and slashing cuts and wounds into his courageous opponent and finishing in spectacular style in the eleventh.

Joe Joyce knocked Joseph Parker out with a left hook

Joseph Parker was knocked out in round 11

Joyce, who turned 37 on Monday is an infamously slow starter, was not at the races early again in Manchester.

The 30-year-old Parker tagged him a with a range of different shots, to head and body, and took the opening round.

The Putney Juggernaut was on the front foot and took control of the centre of the ring.

But former WBO world champ Parker peppered him with a handful of jabs, a decent right hand and couple of left hooks.

Joyce woke up for the second and made a bloody mess of Parker’s nose.

The Samoan was whacking away at the Londoner’s ribs as much as he could but Joyce has freakish resilience.

Parker looked shattered and stunned in the third, one Joyce dig sent a stream of his blood spewing onto the ringside photographers.

But then he battled back into the round with a handful of flush shots that Joyce somehow shook off like they were nothing.

Parker scored with two cracking right hands in the fourth too, but Joyce didn’t even wince.

Somehow he shipped the shots and just carried on marching forward and throwing his own.

It must have been soul destroying to have all his best punches getting brushed off.

Joyce raced out for the sixth and smashed a right hand straight onto Parker’s broken nose.

The Kiwi was struggling to breath through his nostrils and having to gasp for air through his mouth.

Parker suffered a bad cut on the corner of his right eye in the seventh when he simply could not escape Joyce’s relentless abuse. 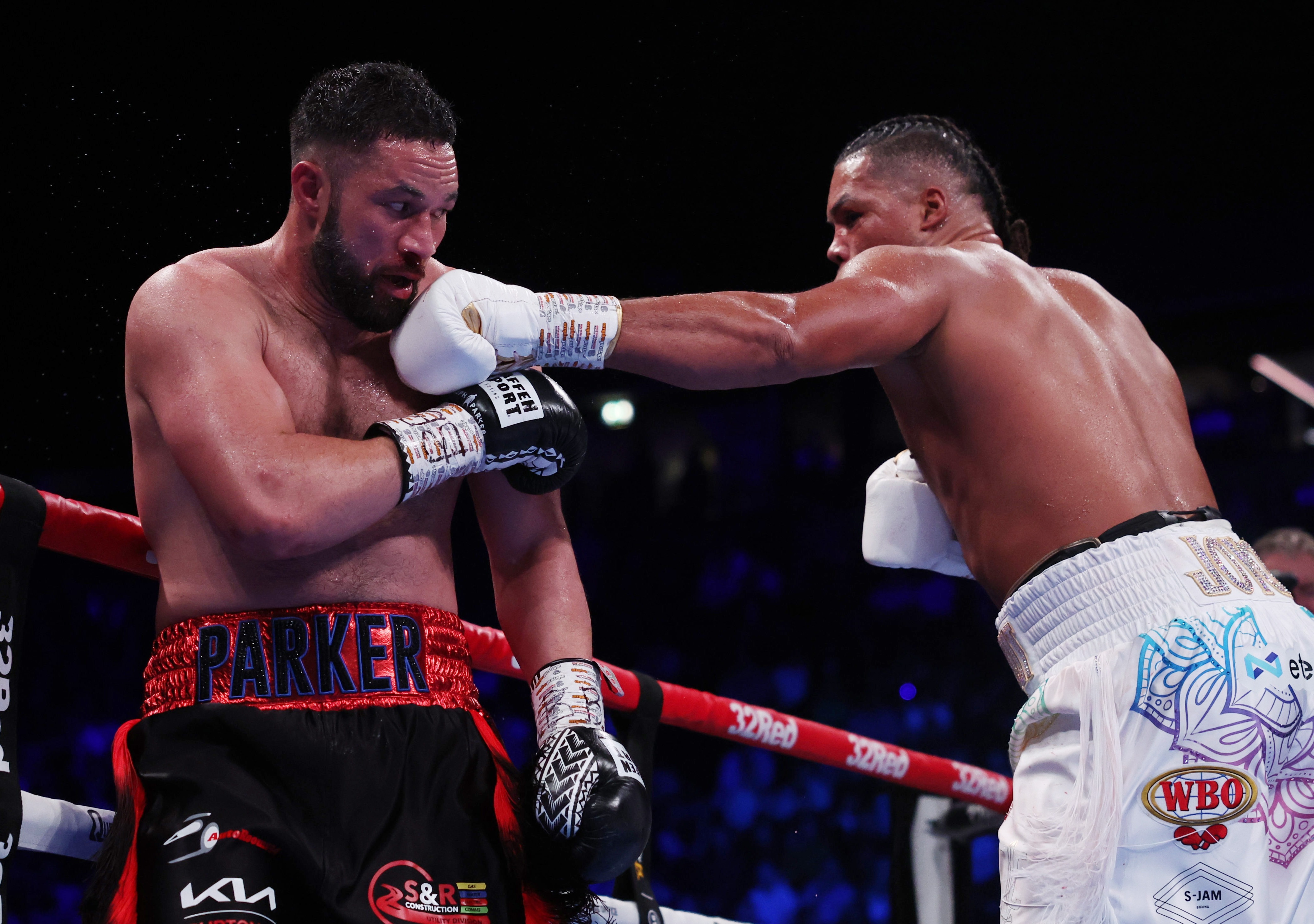 Putney Juggernaut was on the front foot and took control of the centre of the ring. 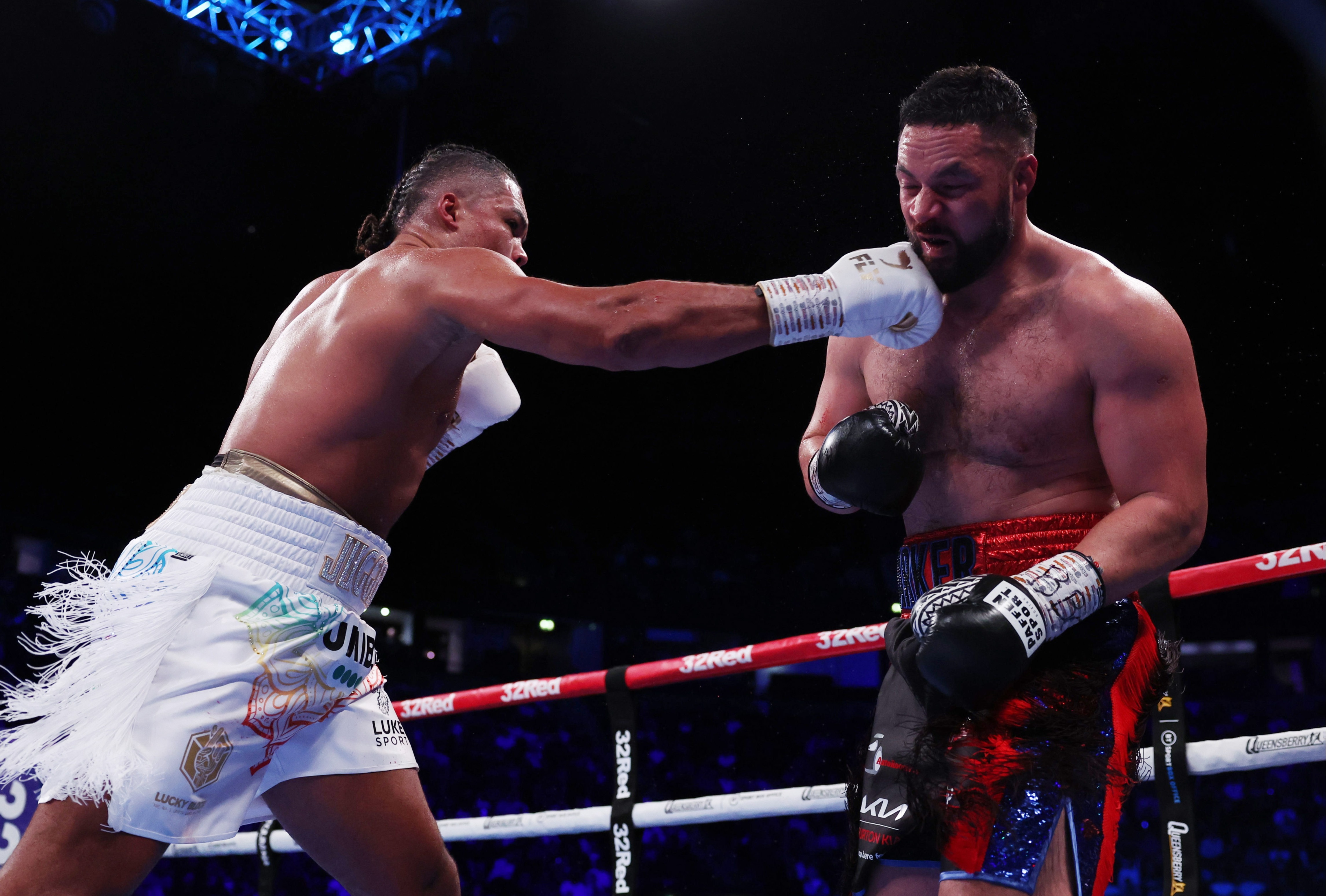 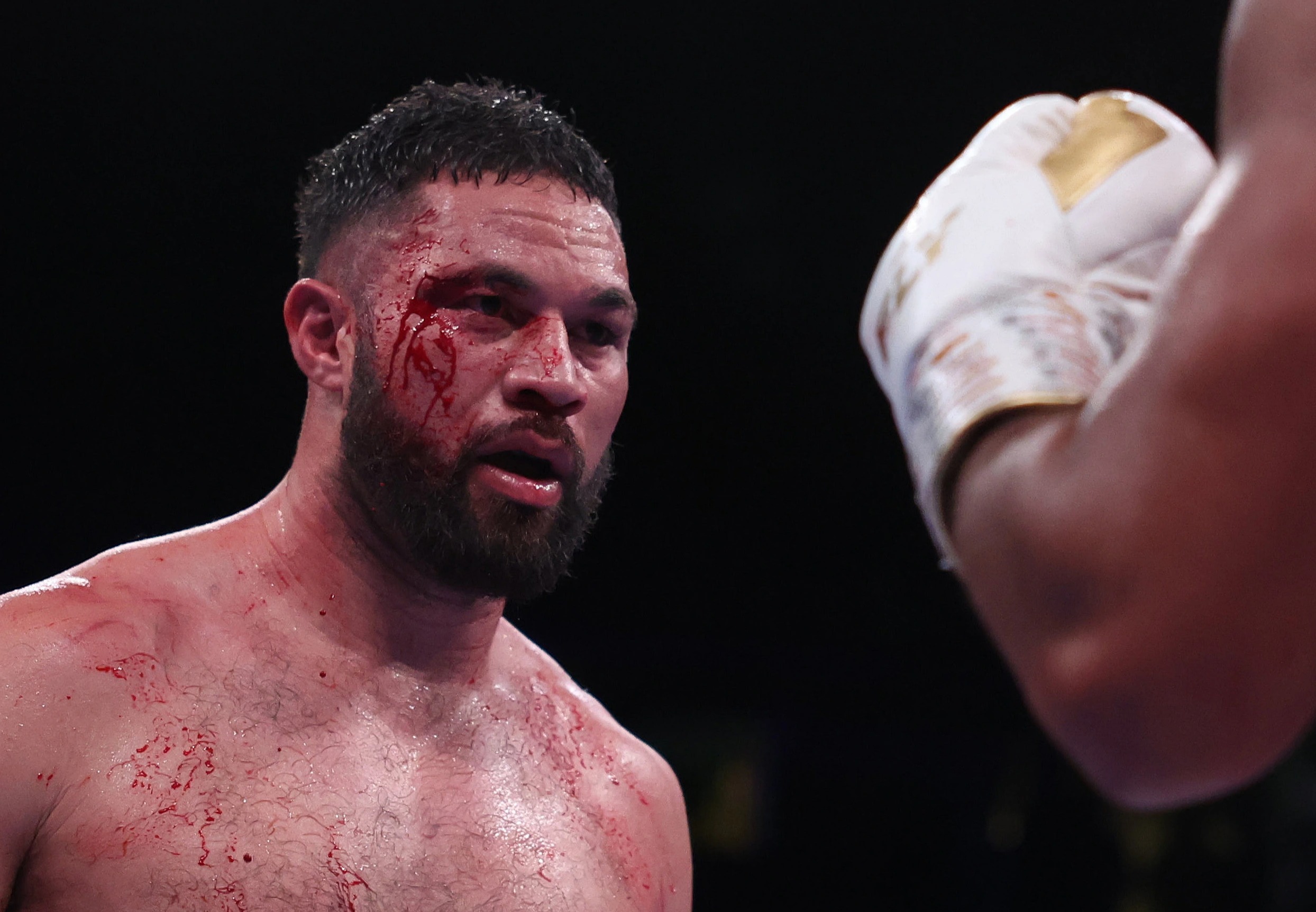 Team Parker did their best to close the gash but the first punch of the eighth ripped it open again and the claret was like a red rag to a raging bull.

Joyce was still getting punched back but he was overpowering and exhausting Parker in every clinch and slashing away at his head and body.

Joyce’s white tasseled shorts were pink by the end of the ninth and – while Parker looked like he had been ambushed by a gang of thugs – Joyce still looked fresh as a daisy, despite getting hit with dozens of big shots.

Parker looked finished in the tenth too but then dug so deep to land five left hooks right on the bell.

It was all action, thrilling stuff but only Joyce looked capable of scoring the late stoppage thanks to his super-human chin.

Then Joyce detonated a stunning left hook that sent Parker stumbling backwards and down to the canvas.

The brilliantly brave warrior beat the count but referee Steve Gray expertly waved the bout off to save him from any more damage. 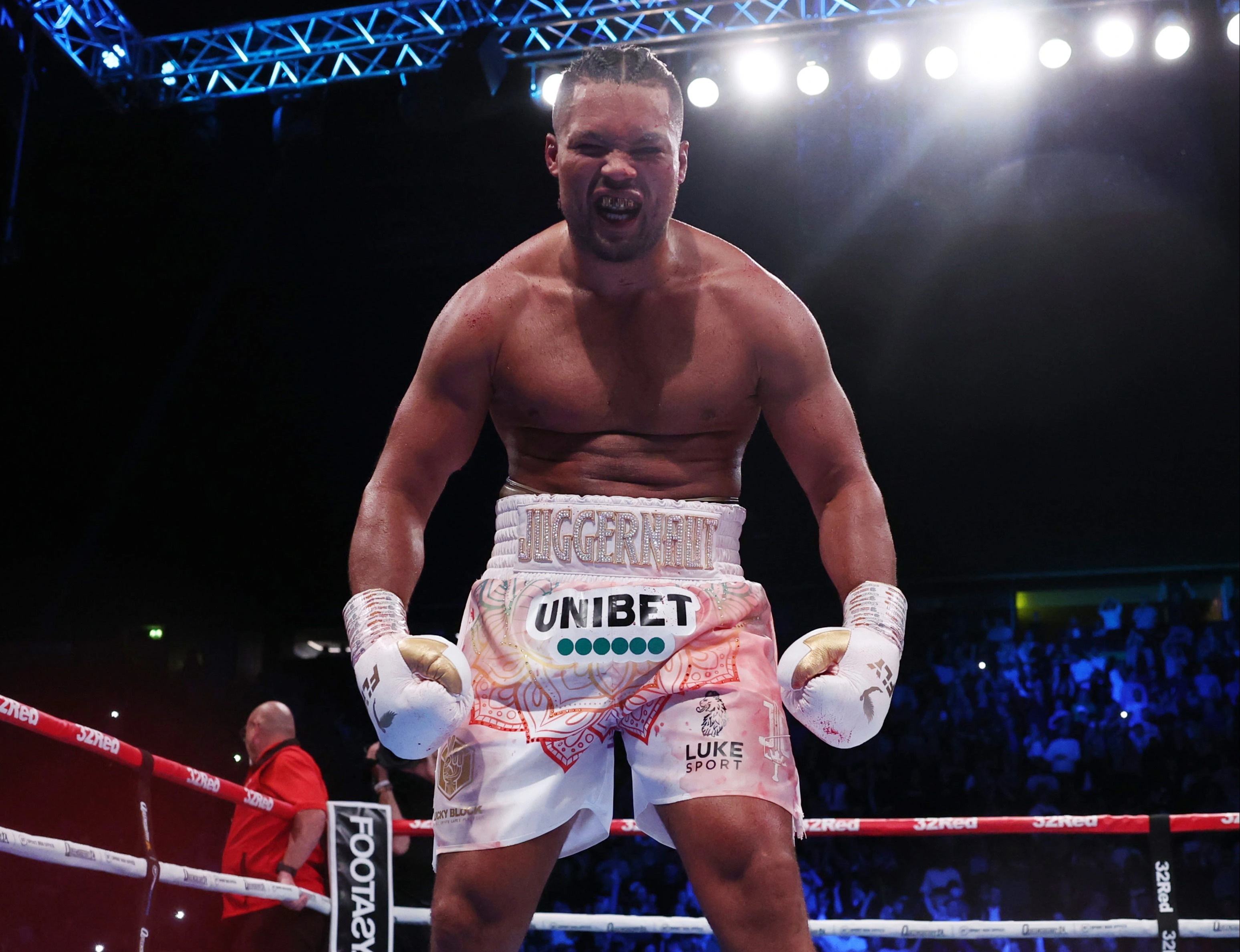 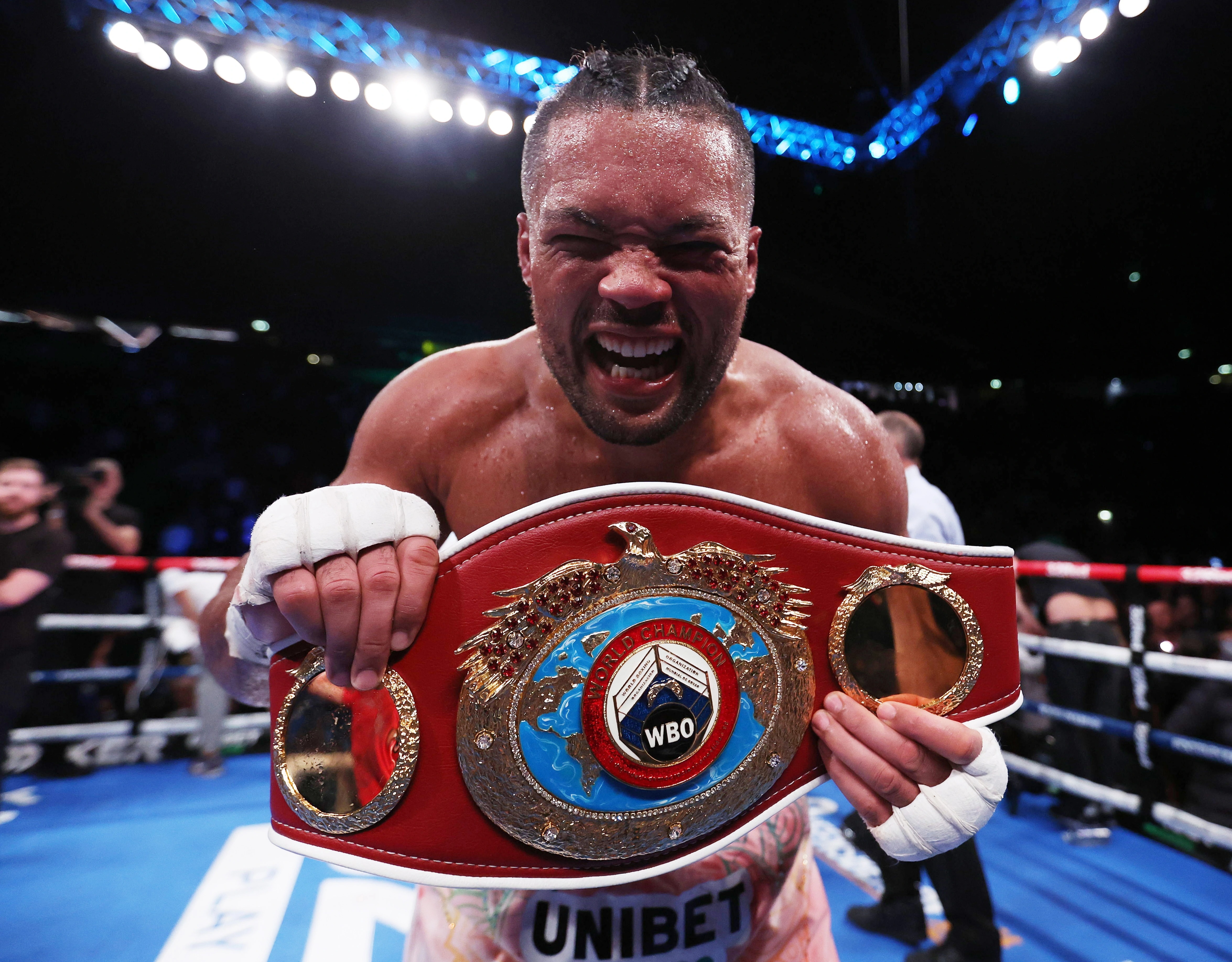 Professional boxing requires dedication and years of hardwork. A minimum of 10 hours per week is required to train to become a professional ring fighter.

If you are looking to box with a partner but don’t want to train, you can just watch the professional boxing matches on TV. Or you can find an amateur boxing club near you. Amateur boxing clubs hold regular training sessions. These sessions usually involve sparring partners who hit pads together.

Boxing is the oldest known martial art. China recorded the first boxing match in 2200 BC. Boxing has been practiced over thousands of year. Today, boxing is still loved by celebrities and athletes. It takes around 10 months for a boxer to be proficient.

It takes so long for boxing to be learned because there are many types of movements involved. Each movement requires specific muscles in order to be effective. It takes time to train these muscles.

You can learn how to box. You just need to find a boxing gym near you and join a class. Although most gyms offer free classes to their members, it is possible to search Google for other local boxing clubs.

Learning boxing will help you improve your self-confidence and physical fitness. Boxing is one the most loved sports in the world. It requires speed, agility and strength.

There are many types of boxing training programs. Some programs are offered at local gyms and others at your home. You can also study online from any location in the world.

Consider whether you prefer a beginner or advanced course. Beginner’s courses usually cover basic techniques such as shadowboxing or sparring, mittwork and punching combinations. Advanced programs often cover more complex movements, and include a greater variety of exercises.

Programs for beginners usually last eight weeks and cost less that $100. They don’t offer any advice on nutrition, weight loss or injury prevention.

Advanced programs typically last six months and cost around $300. They may include nutritional advice, stretching, warm-up exercises and instruction on proper technique. Some programs include resistance training such as lifting weights and aerobic conditioning such as running.