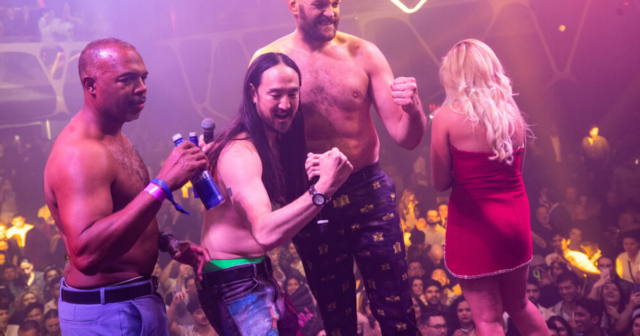 TYSON FURY was spotted at a Liverpool pub last weekend without his top on.

The WBC heavyweight champion is currently living his best life after stunningly hanging up his gloves in April.

The Gypsy King recently spent the day at The Queens Arms pub by Aintree racecourse, where he spoke and took photos with several punters.

But the burly Brit was topless for large portions of his visit to the boozer.

Pictures circulating on social media show the former unified heavyweight champion chatting to his fellow punters without his top on.

Fight fans were quick to comment, with one asking: “Why’s he topless?”

Another asked: “Why does he always have his top off???”

And another asked: “Has he got his shirt off?”

One remarked: “He wears pants when his in the Gym and goes to the Pub with no Top on.

“@Tyson_Fury lives like a King and does whatever the F**K he wants.”

Fury, 33, is no stranger to being topless in a public setting – unlike most people.

The Wythenshawe warrior partied in a Las Vegas nightclub without his top on following his brutal knockout of Deontay Wilder last October.

And more recently, Fury enjoyed a topless run with dad John while on a family holiday in France.

Fan favourite Fury announced his retirement from boxing after his vicious sixth-round knockout of Dillian Whyte.

But he exclusively revealed to SunSport last month that he’s willing to lace up his gloves one last time.

He said: “I will be back in the ring 100 per cent, just like in the movie when Jerry Maguire shouted, ‘Show me the money!’

Did you miss our previous article…
https://www.sportingexcitement.com/boxing/canelo-alvarez-blasts-fing-ahole-gennady-golovkin-as-war-of-words-turns-personal-ahead-of-trilogy-fight/