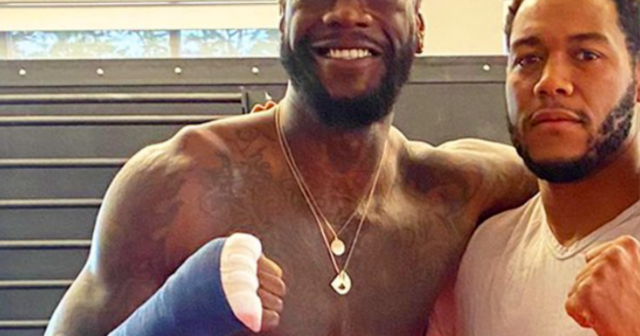 Deontay Wilder looks transformed as he prepares for his next fight

He bulked up to help himself deal with Tyson’s huge size in the ring but he has since shed the pounds and has now shocked fans with how lean he looks.

Fans commented on his smaller frame with some suggesting Wilder could become a cruiserweight.

Another added: “He looks poorly sick I hope he is ok.”

A third said: “This transformation is unreal.”

Wilder hasn’t set foot inside the ring since his brutal 11th-round KO loss to Tyson Fury in their epic trilogy fight last October.

But the American recently dispelled suggestions of retirement by saying: “I can’t stop right here.

“I must continue my journey. I have to, I have to.

“I’m looking to resume my career for sure. I’ve got a lot of other things I’ve got to get out of the way.”

The Bronze Bomber has been training in the gym and recently posed alongside Badou Jack after sparring with the fighter, who is set to face Richard Rivera on the undercard of Anthony Joshua’s rematch with Oleksandr Usyk.

Wilder also met UFC champion Francis Ngannou this week and revealed to the heavyweight that he is looking to “get back into the groove” – hinting at a possible return to the ring.