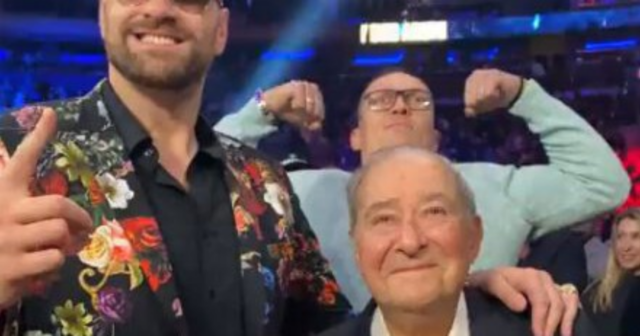 The heavyweight pair came face-to-face at Madison Square Garden last December after Fury told Usyk ‘I am coming’ while on the phone to his heavyweight rival.

Usyk poses behind an unknowing Fury

Fury then turned and the pair shared a smile and embrace

At first though Fury, 33, didn’t realise Usyk, 35, was behind him as he unknowingly smiled alongside promoter Bob Arum.

The Ukrainian flexed his muscles behind the Gypsy King, before quickly ducking out of shot.

Fury then spun round and clocked Anthony Joshua’s conquerer.

The duo shared a high-five before embracing and exchanging a few words.

Fury stopped Dillian Wyte in March before stunning the world by retiring from boxing.

Anthony Joshua’s new trainer Robert Garcia is eyeing an “awesome” fight with undefeated Fury IF his man can get past Usyk first.

While there are also shock reports Fury is in discussions over a possible return to the WWE.

And in a bizarre scene, Fury was spotted at a Liverpool pub last weekend without his top on.

The Wythenshawe warrior partied in a Las Vegas nightclub without his top on following his brutal knockout of Deontay Wilder last October.

And more recently, Fury enjoyed a topless run with dad John while on a family holiday in France.