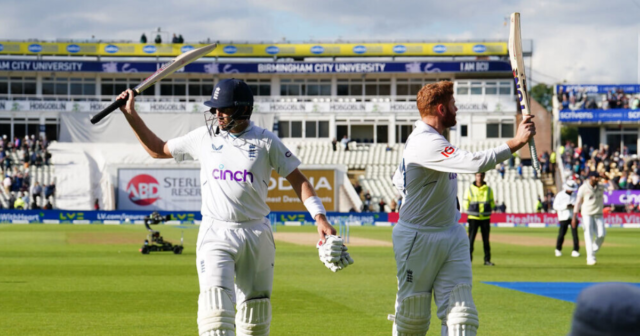 JOE ROOT and Jonny Bairstow left England dreaming of their most remarkable feat even of this remarkable summer.

It would have been unbelievable just a month ago, but England are on course to chase a target of 378, win the Fifth Test and level the held over series against India.

Three fabulous run chases against New Zealand were startling enough but a victory here at Edgbaston would be little short of mind-boggling.

Such is the confidence, form and sense of expectation of this transformed England team under Ben Stokes and Brendon McCullum, however, it is entirely feasible.

Root and Bairstow have so far put on 151 for the fourth wicket from just 32.5 overs as England once more sustained a scoring rate above four-and-a-half an over.

Their stand came after a dazzling – and record-breaking – opening liaison of 107 between Alex Lees and Zak Crawley. A collapse followed in which England lost three wickets for two runs in 16 balls before Root and Bairstow seized control.

There was plenty of needle, too, with Virat Kohli seemingly at the centre of things, as he often is.

By the close of day four, England were 259-3 and needed just another 118 runs with seven wickets intact.

Even proponents of Bazball would have struggled to believe that Lees and Crawley could attack with such ferocity.

The pair compiled the fastest century opening stand for England in Test history with three figures arriving in just 19.5 overs. 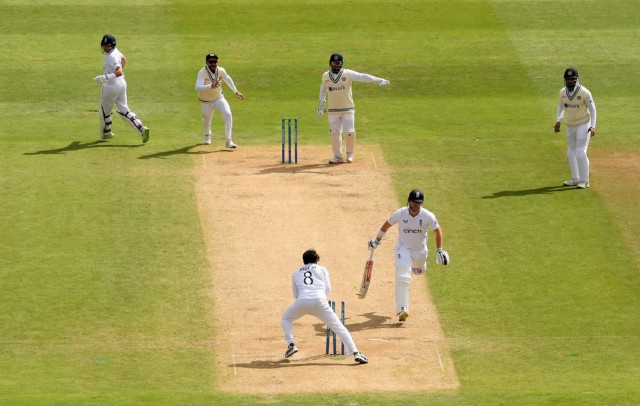 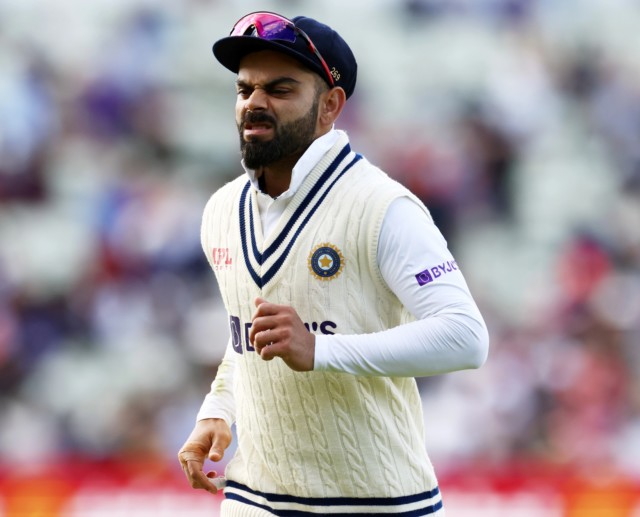 Lees, who reached his half-century from just 44 balls, advanced down the pitch to India’s quick bowlers as well as spinner Ravi Jadeja and Crawley unleashed a string of stunning drives either side of the wicket.

But things changed after Bumrah returned for his second spell and persuaded Crawley to leave a ball – and it crashed into his stumps.

As the players departed for tea eight balls later, Kohli was in Lees’ ear, trying to disturb and unsettle him.

Ollie Pope fiddled at the first ball after tea and was caught behind for his first duck in Test cricket in his 48th innings.

Then Lees was run out for the second match on the trot when he squirted to backward square leg, hesitated as Root set off for a single and was several feet short as bowler Jadeja gathered Mohammed Shami’s throw and removed the bails.

Kohli went crazy, charging around, jumping and punching the air. It was almost as he felt he’d taken the wicket himself.

Lees said: “Kohli is a very competitive person and I’m quite headstrong – well, that’s what my wife says.

“Cricket is competitive and he had a few words and I had a few words. I’m not going to back down. It’s just the edge that Test cricket has and it needs.

“We need characters in the game and we need emotion. It was nothing that much but it was fun.”

India knew Root was a key wicket and twice asked for reviews but the former captain survived. Bairstow was dropped on 14 by Hanuma Vihari at a wide second slip off Mohammed Siraj.

Bairstow was also spilled on 39 by wicketkeeper Rishabh Pant diving low to his left off Thakur.

But the self-belief of Root and Bairstow is sky-high and soon they were cruising along and Indian heads visibly dropped.

Several came with the bouncer strategy for which the hosts were criticised in the first innings. So fair play to Stokes for sticking to his beliefs.

The wickets started when Cheteshwar Pujara cut to point and Shreyas Iyer mis-pulled feebly to mid-wicket.

Pant was the man who could hurt England most but, after adding 57 to his 146 in the first innings, he attempted a reverse sweep and was sharply caught by Root at slip.

Shardul Thakur top-edged a pull to fine leg and Shami paddled a pull into backward square leg’s hands, Jadeja dragged on and Bumrah was also held at fine leg.

Lees added: “What brought us back into the game was Stokesy bowling. We could easily have been chasing 450 or 500.

“Joe was gutted about the run out. Maybe he can lend me one of his Test centuries – he has plenty of them!”

Advertisement. Scroll to continue reading.
In this article:fifthtest, joeroot, jonnybairstow