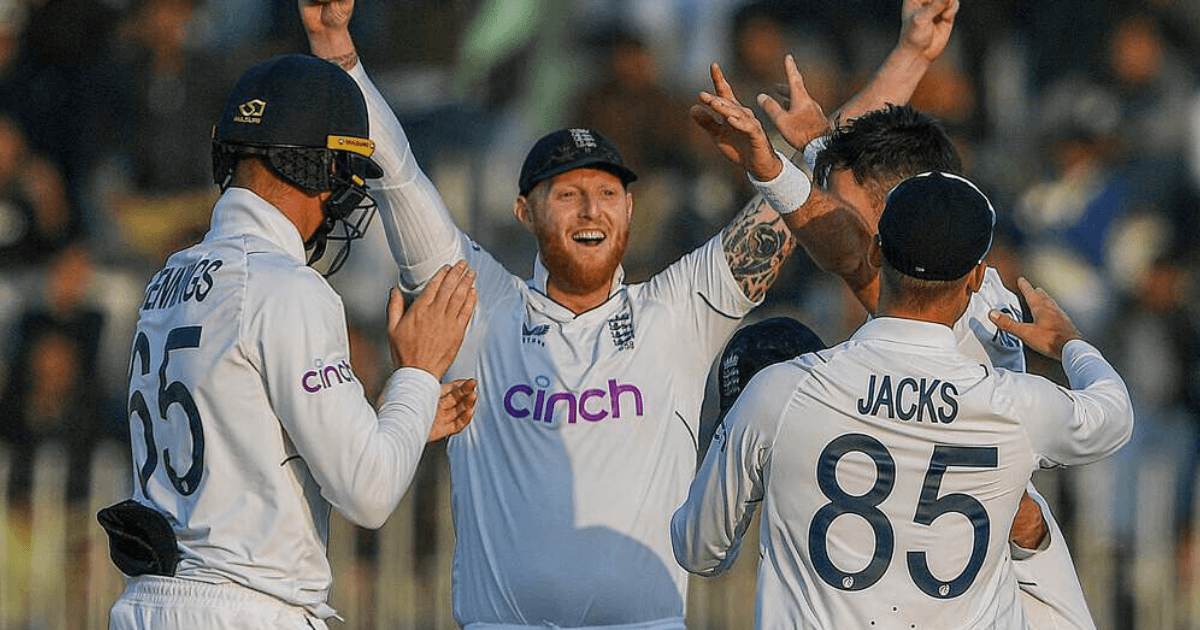 BEN STOKES and England put the finishing touches to one of the most remarkable Test victories of all time.

Captain Stokes was rewarded for his aggressive and, as it turned out, brilliant declaration as England won the First Test by 74 runs with approximately 12 minutes to spare before bad light would have intervened.

Ben Stokes led his England side to a sensational Test victory 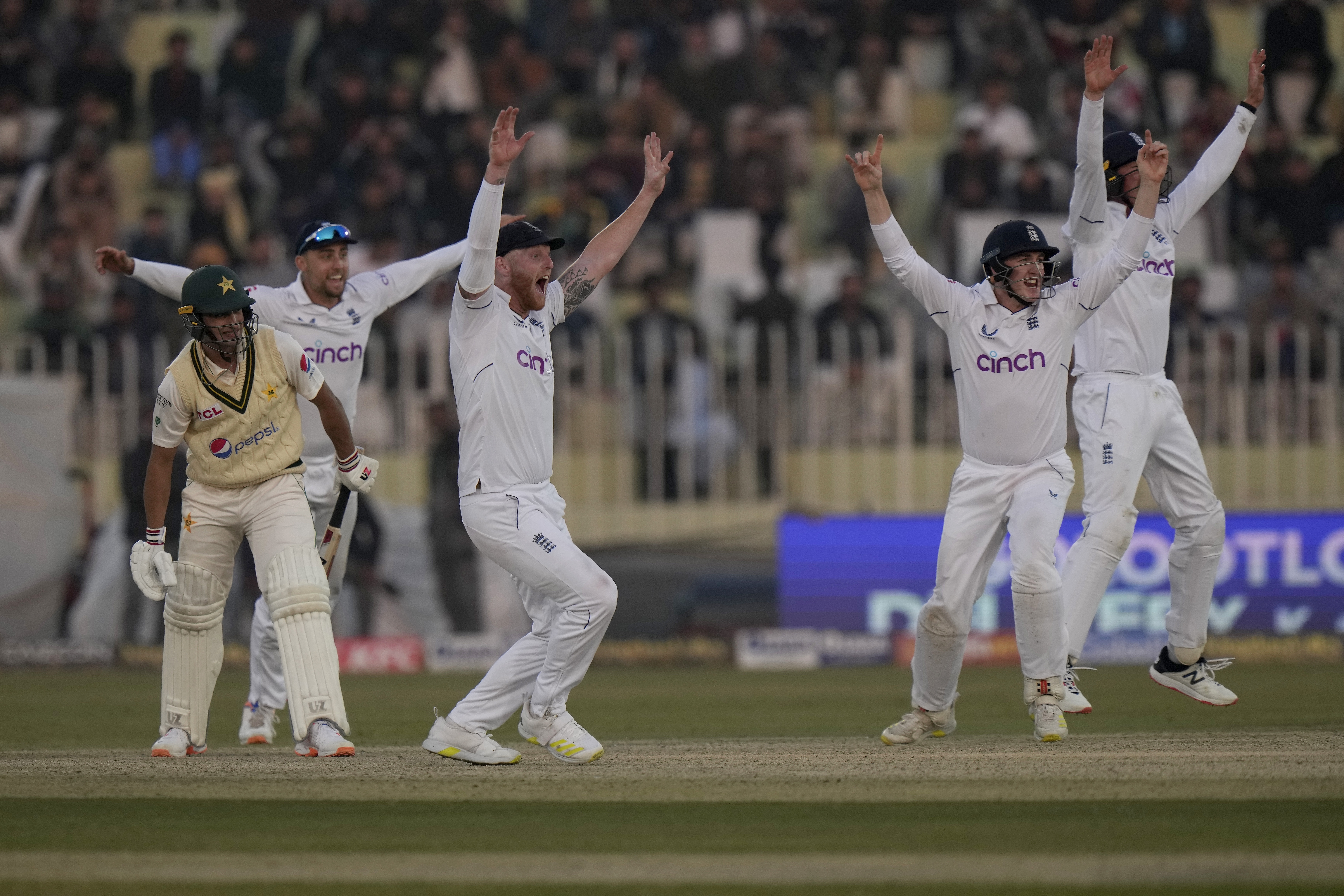 The appeals went up when Naseem Shah was trapped in front 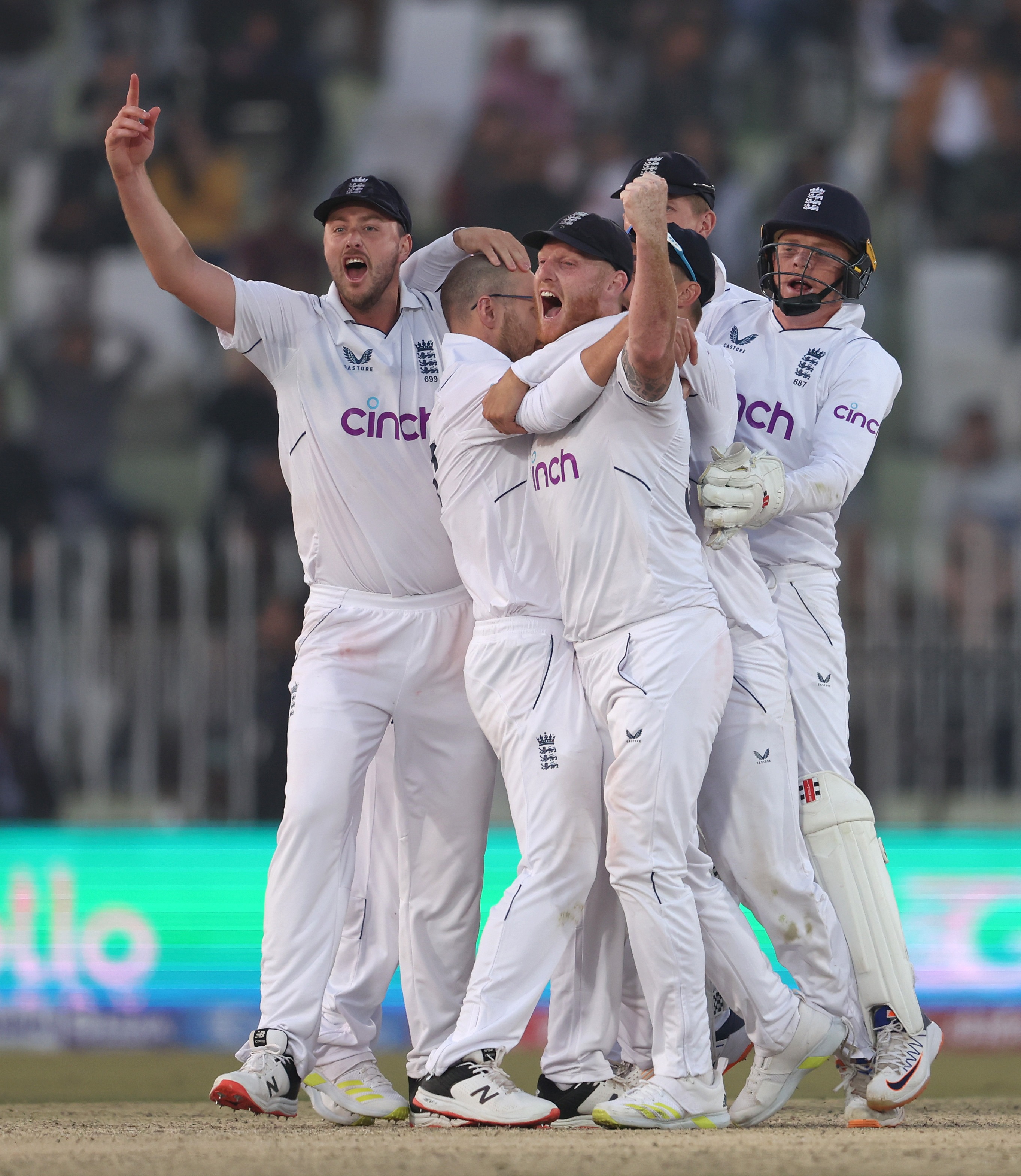 The innovation and imagination of Stokes turned a potential bore-draw in Rawalpindi into a nerve-shredding thriller. It means England won their historic first Test in Pakistan for 17 years.

Jimmy Anderson and Ollie Robinson took four wickets apiece, Stokes one and 40-year-old Anderson finished with the amazing figures of 24-12-36-4.

The winning wicket came when Jack Leach had Naseem Shah lbw after the tenth-wicket pair had resisted for nine overs.

Almost every decision made by Stokes turned to gold – whether it be bowling changes, field placings or delay taking the second new ball.

Stokes’ ingenuity – and the bowling of Anderson and Robinson, in particular – meant England were able to take wickets regularly enough.

So the ‘Bazball’ ledger of Stokes and head coach Brendon McCullum since they took charge of England at the start of last summer is seven wins in eight matches. Don’t forget, England won just one of their previous 17 Tests.

In its way – bearing in mind the nature of the pitch and the loss of time each day because of bad light – this is perhaps the most unlikely of them all. England won even though Pakistan scored 579 in their first innings.

Fortunes fluctuated wildly during a thrilling final day and, on at least a couple of occasions, Pakistan were favourites to win the match.

But England kept clawing themselves back with crucial wickets.

Anderson had opener Imam-ul-Haq caught down the legside but Mohammad Rizwan didn’t score a run from his first 23 balls.

He upped the tempo after the first drinks break when 11 runs came from Will Jacks’ first over of the final day.

Rizwan and Saud Shakeel looked comfortable during their stand of 87 for the fourth wicket but both departed within the space of six overs shortly after lunch.

Rizwan fiddled at Anderson and was caught behind and then Shakeel drove Robinson to short extra cover where sub fielder Keaton Jennings leapt to his right and held a fine catch.

Stokes employed seamers for most of the afternoon session and, for the first time in the match, there was some reverse swing.

But the obdurate Azhar Ali, forced to retire hurt on the fourth evening when struck on the right index finger by Robinson, was fit to bat.

Azhar and Agha Salman added a further 61 for the sixth wicket although England were close to removing both of them in the space of two balls.

Salman was given out leg before to Jack Leach but a review showed the ball going over the top of the stumps by around five inches, which surprised a few people.

Next ball, Azhar was dropped down the legside by Pope off Robinson.

But everything changed after tea, when Stokes’ decision to keep the rough and worn ball – rather than call for a hard new one – was vindicated. Stokes knew that reverse swing was England’s most potent weapon.

Salman was lbw on review to Robinson and, next ball, Robinson hit Naseem Shah’s off stump with a yorker but, incredibly, the bails stayed on.

In Robinson’s next over, Azhar turned the ball to leg slip, where Joe Root held a comfortable catch. More inch-perfect field placing by Stokes.

With the ball curving in the air and England on a surge, Pakistan’s tail had little chance of holding on for a draw.

Pope held a fine tumbling catch down the legside to remove Zahid Mahmood and then Anderson nailed Haris Rauf lbw.

But England had to wait another nine overs before Leach took the final wicket.

* Liam Livingstone is flying home from Pakistan after scans revealed cartilage damage to his right knee, which he strained while fielding on the second day of his Test debut. England have no plans to summon a replacement. 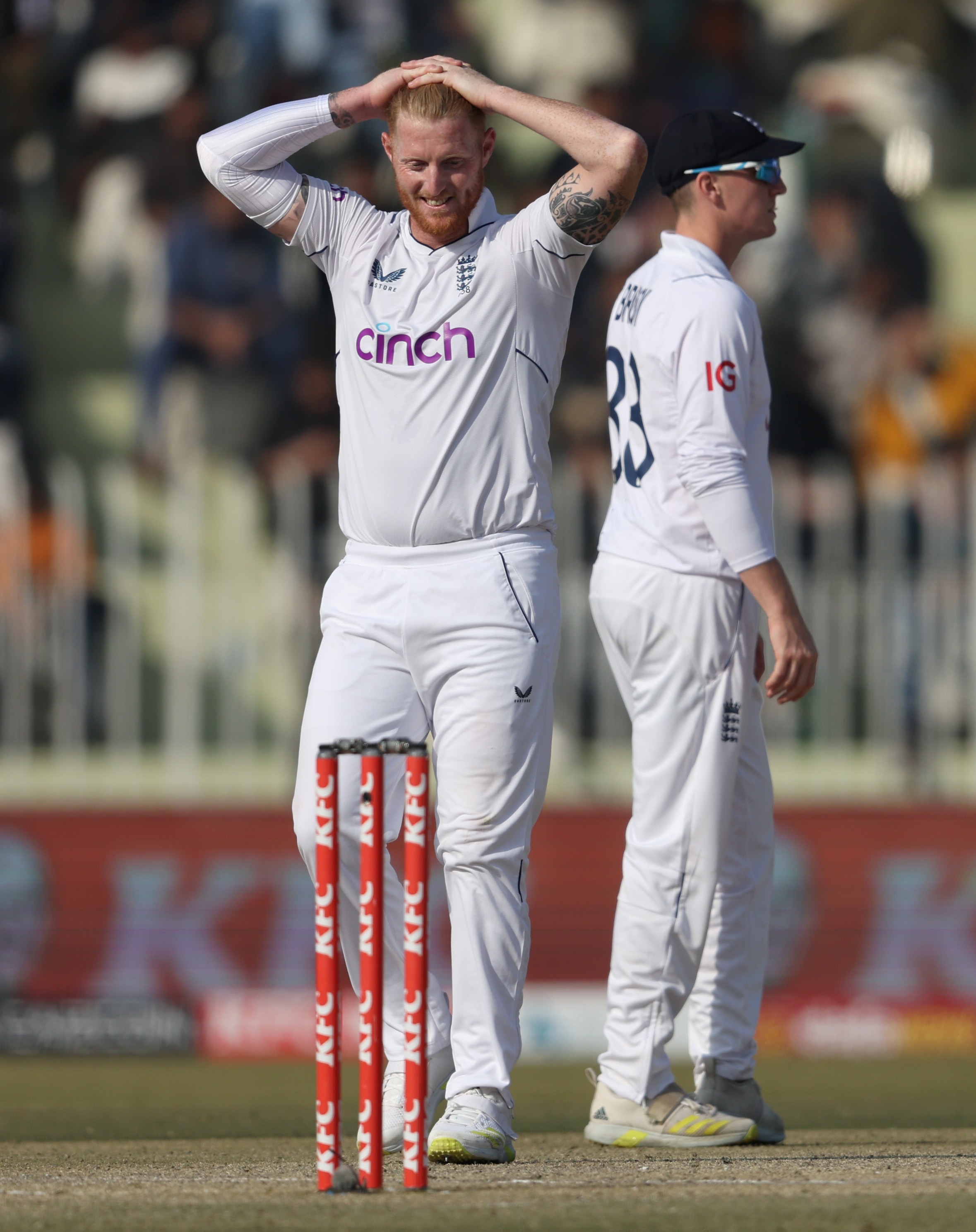 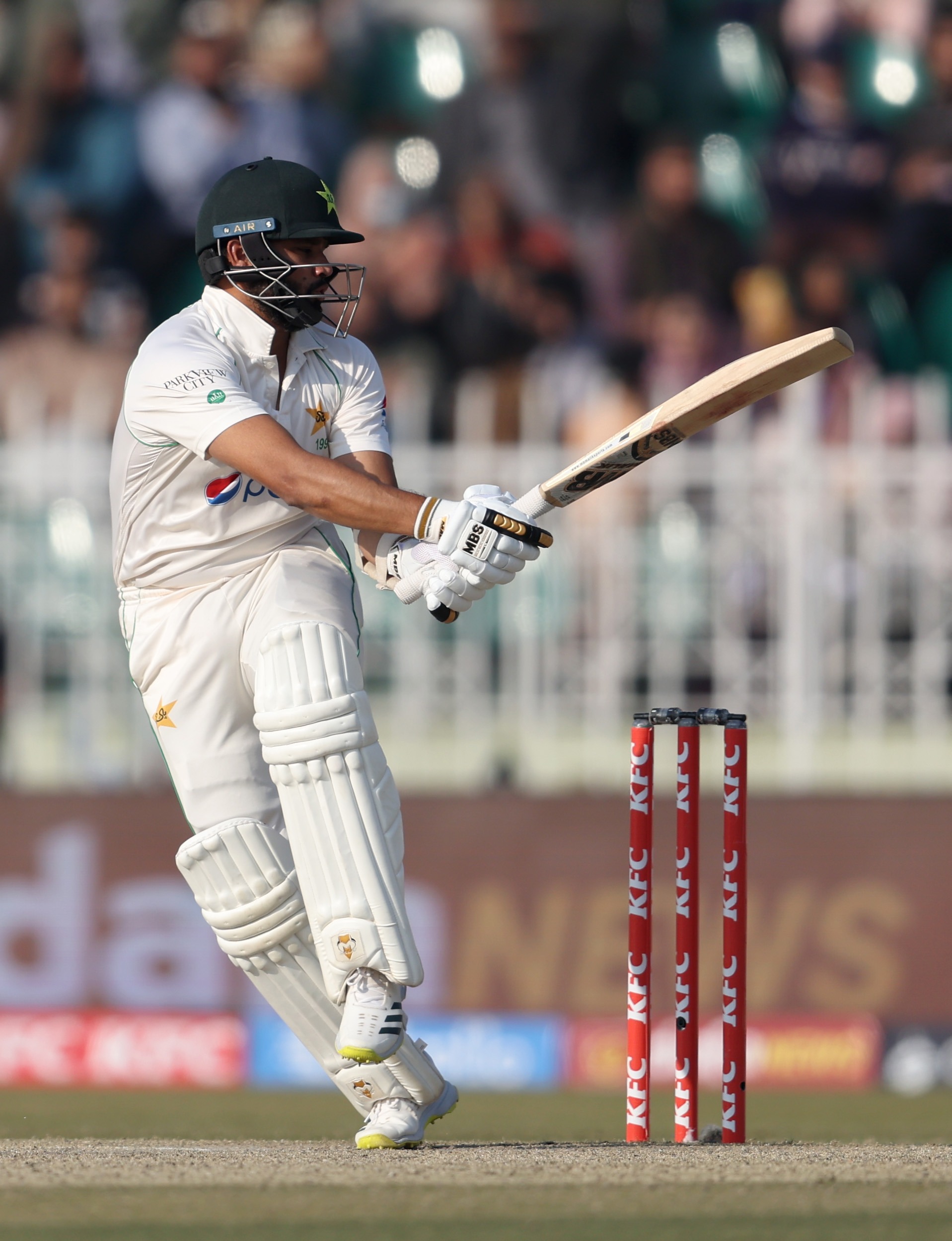 Azhar Ali plugged away as Pakistan closed in on their target 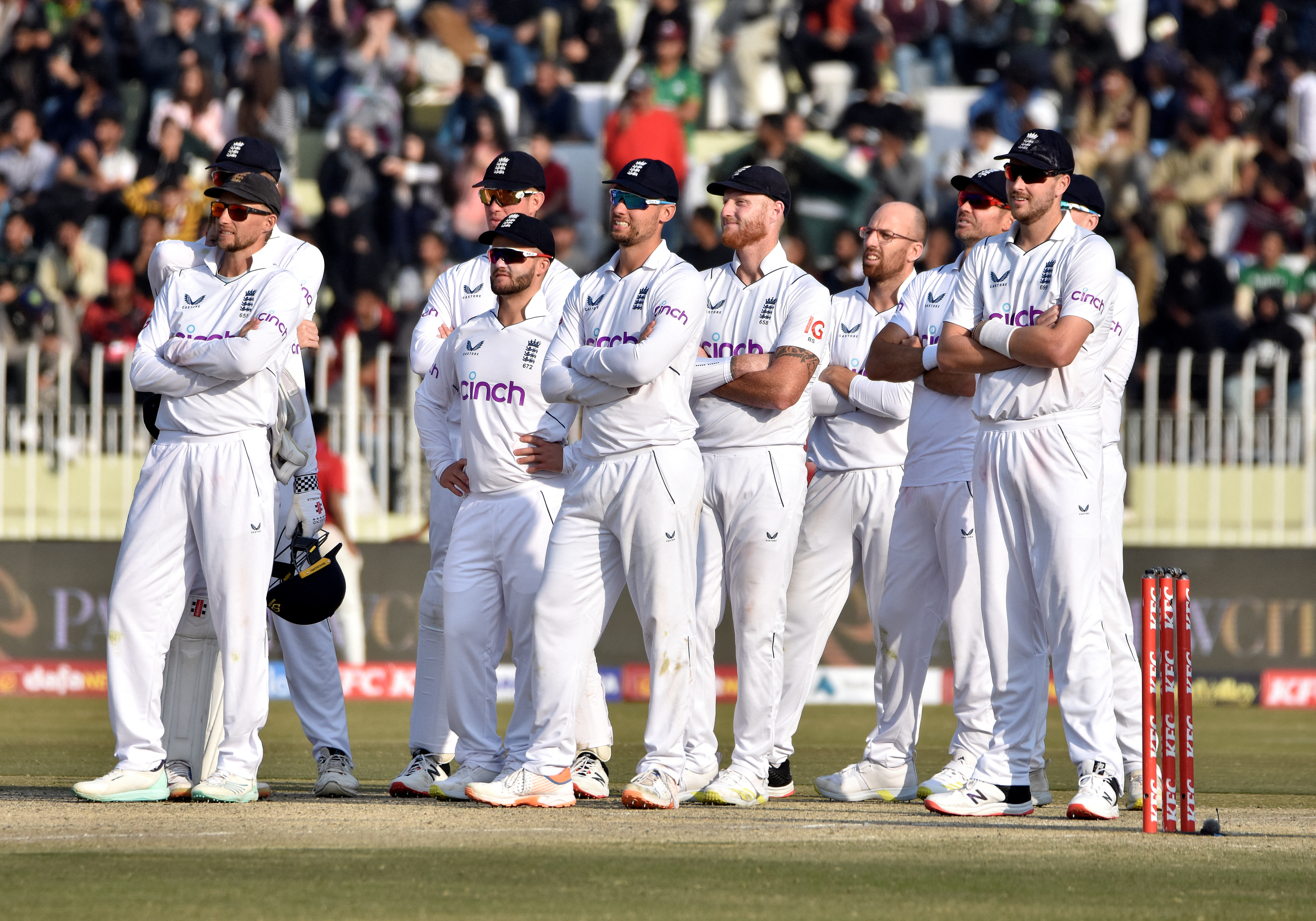 England were forced to wait for a few DRS decisions 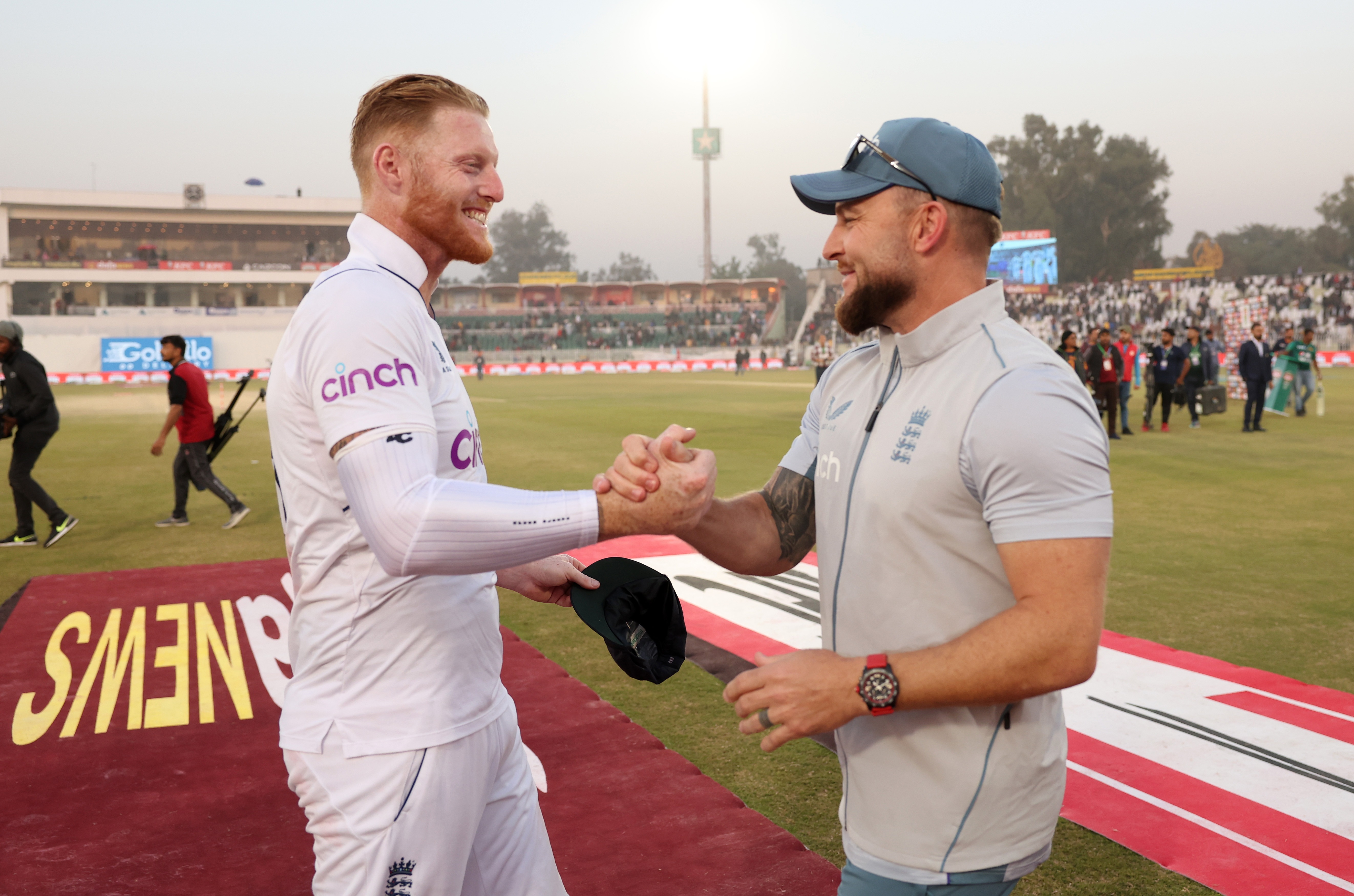 Stokes and coach Brendon McCullum are becoming a formidable partnership