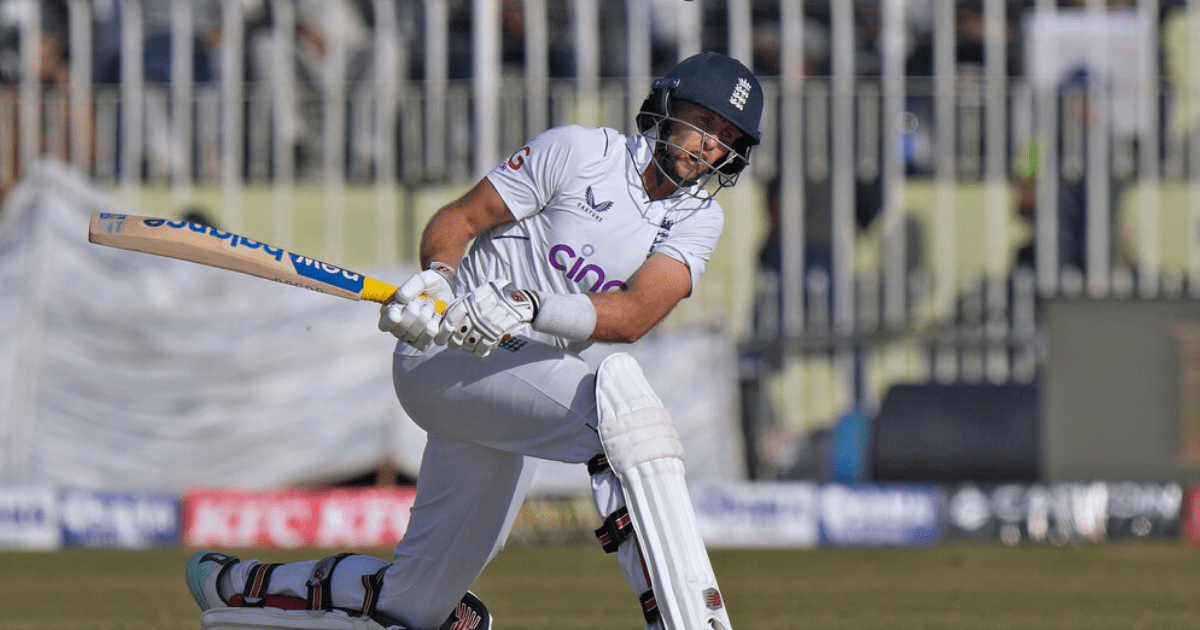 ENGLAND fans were loving it as Joe Root batted left-handed on a blockbuster day of Test cricket.

The former captain clearly felt confident out as he turned on the style in the middle at Rawalpindi.

Joe Root played a left-handed shot during his innings

"Batting right-handed too easy for him"

So much so that the right-hander felt the need to shake it up and switch across to playing left-handed.

And it almost made him look a bit sheepish immediately but his sweep off Zahid Mahmood was dropped.

The commentators could barely believe what they were watching as Root scored runs playing on the reverse side.

And fans watching on at home could not contain their joy.

One said: “Joe Root, he does what he wants when he wants.”

Another wrote: “Joe Root batting at Test level left-handed, what a mockery.”

A third added: “Joe Root is bored of just being great so is inventing side quests for himself.”

And a final user commented: “I cant play the sweep shot even while batting right-handed and here’s Joe Root casually playing it perfectly batting left-handed… IN A TEST MATCH! Incredible.”

Root epitomised an England side that were at their most aggressive and inventive as they tried to extract a win from the First Test.

On another madcap day, England dipped into their batting box of tricks – and then captain Ben Stokes produced a carrot-dangling declaration.

He set Pakistan 343 to win in approximately 100 overs – it depends on the bad light – and England had taken two wickets for 80 runs by the close of day four and forced another batsman to retire hurt.

England’s seamers employed a short-ball tactic and Abdullah Shafique holed out to deep mid-wicket and captain Babar Azam edged a catch behind as he fended on the back foot.

To make matters worse for Pakistan, No3 Azhar Ali retired after being struck on the hand by Ollie Robinson.

England will fancy their chances of wrapping up a remarkable victory on the final day after Stokes stayed faithful to his mantra of not being interested in draws.

He was prepared to risk losing a match in which England scored 657 in their first innings. 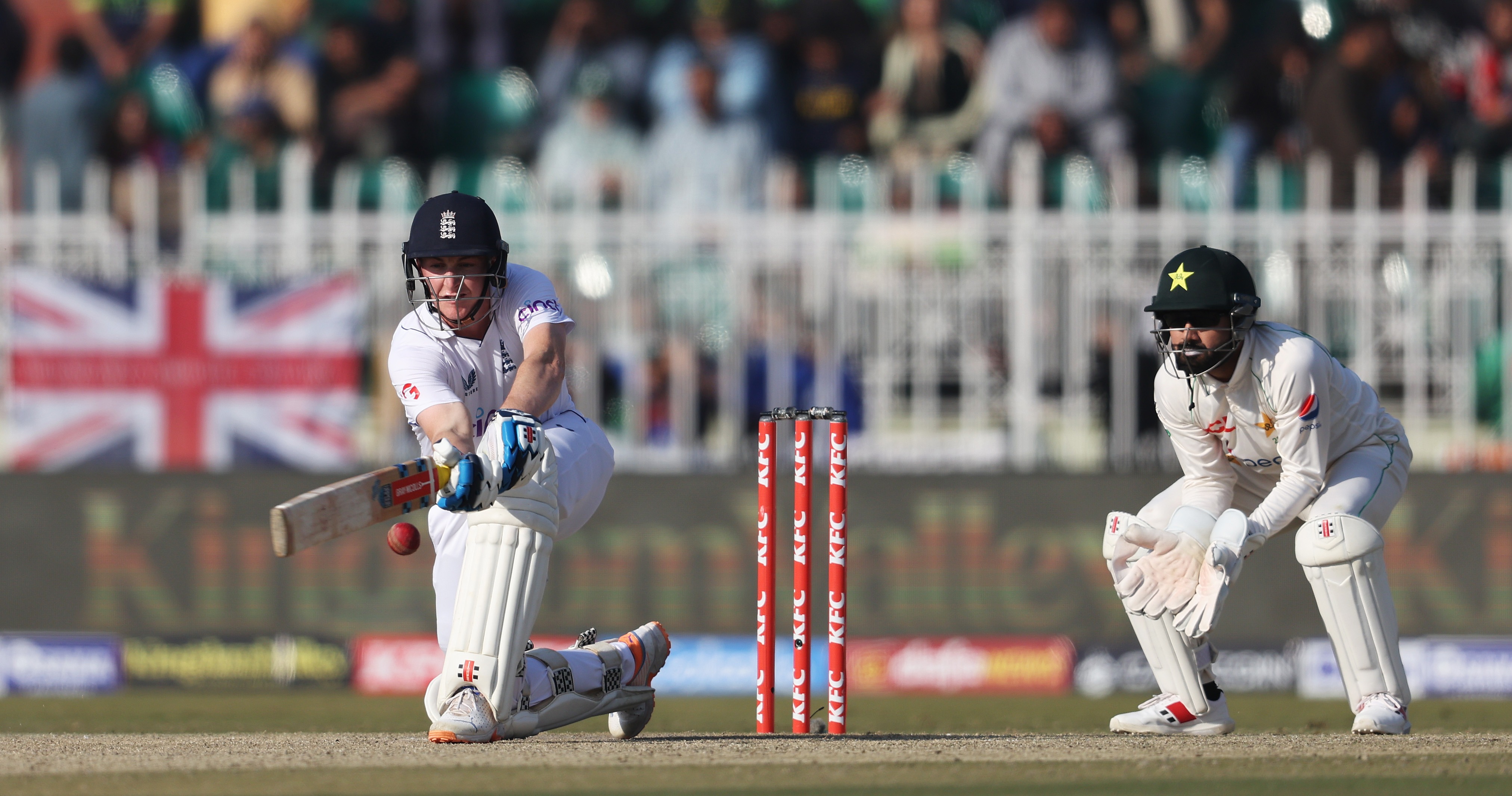 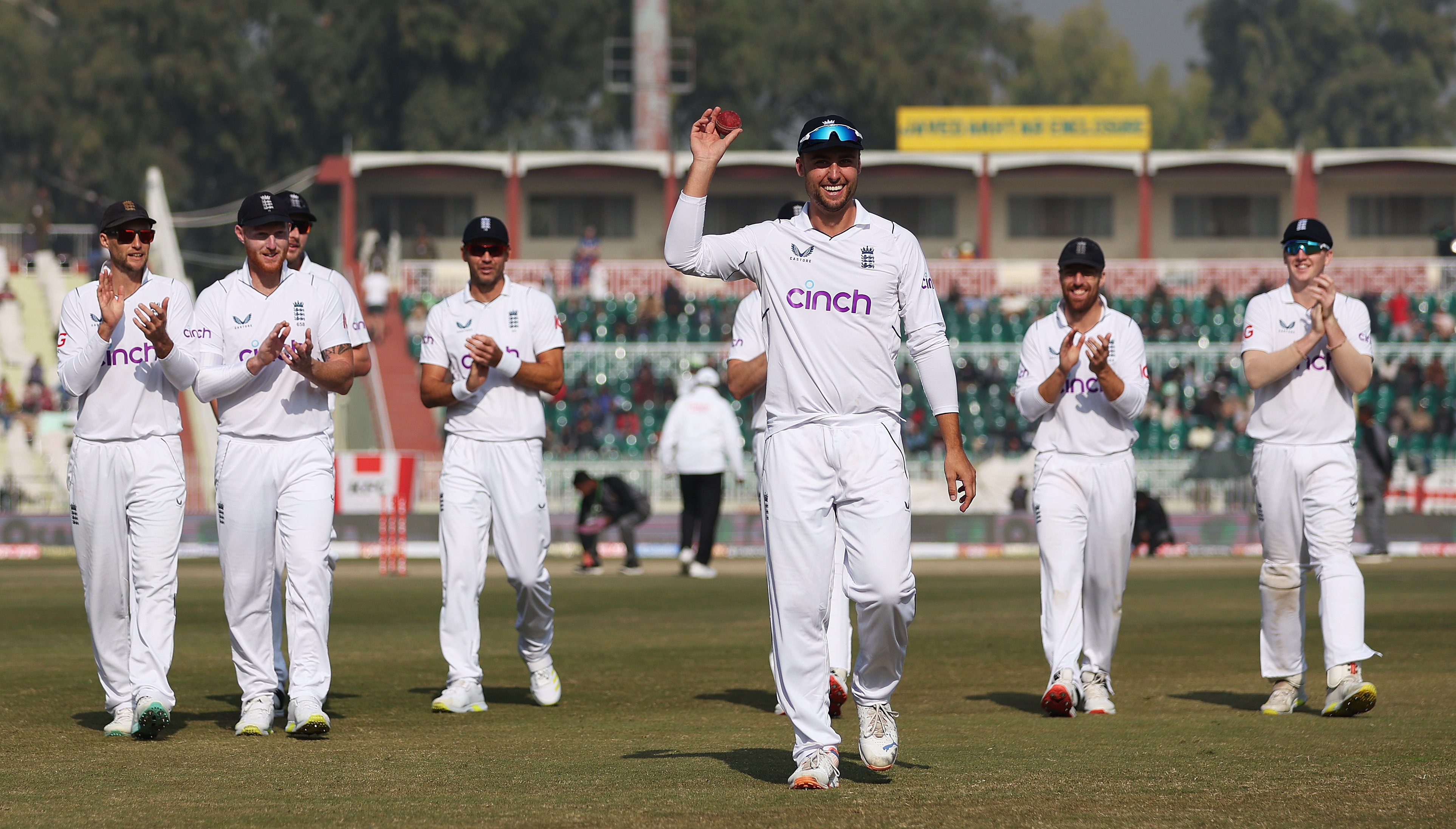 Will Jacks closed out the first Pakistan innings with 6-161

As well as Root batting left-handed, Harry Brook was on course for England’s fastest-ever century, Ben Duckett was out for a golden duck and Stokes was out third ball attempting a massive slog.

England’s second innings added up to 264-7 declared from 35.5 overs – a run-rate of 7.36-per-over, which was faster even than their first innings.

They scored 218 runs in the afternoon session in 28.5 overs.

Earlier, Will Jacks took his wickets tally to six on his Test debut, a match in which he knew he was playing just two minutes before being handed his cap by Surrey team-mate Ollie Pope.

He became the first England spinner to take five wickets in the first innings of his debut since Peter Such in 1993 and the first to do it overseas since Jim Laker, no less, in 1948.

It the first five-wicket haul (or six-wicket haul, of course) of Jacks’ first-class career.

And he is the first England debutant to take a five-for since seamer Toby Roland-Jones against South Africa in 2017.

Pakistan extended their first innings to 579 all out and that’s when the fun really started. 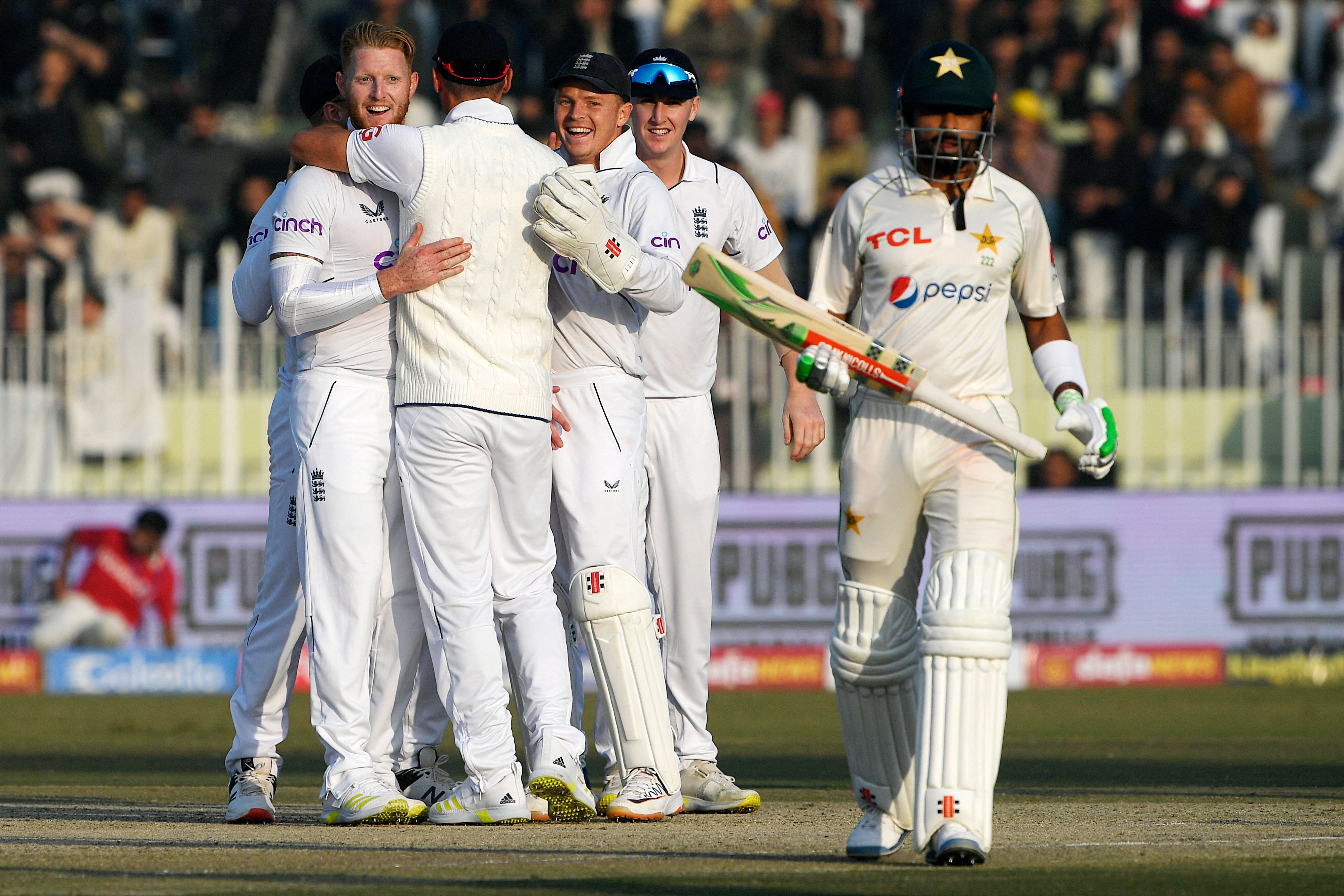 England are hopeful of bowling Pakistan out on Day Five 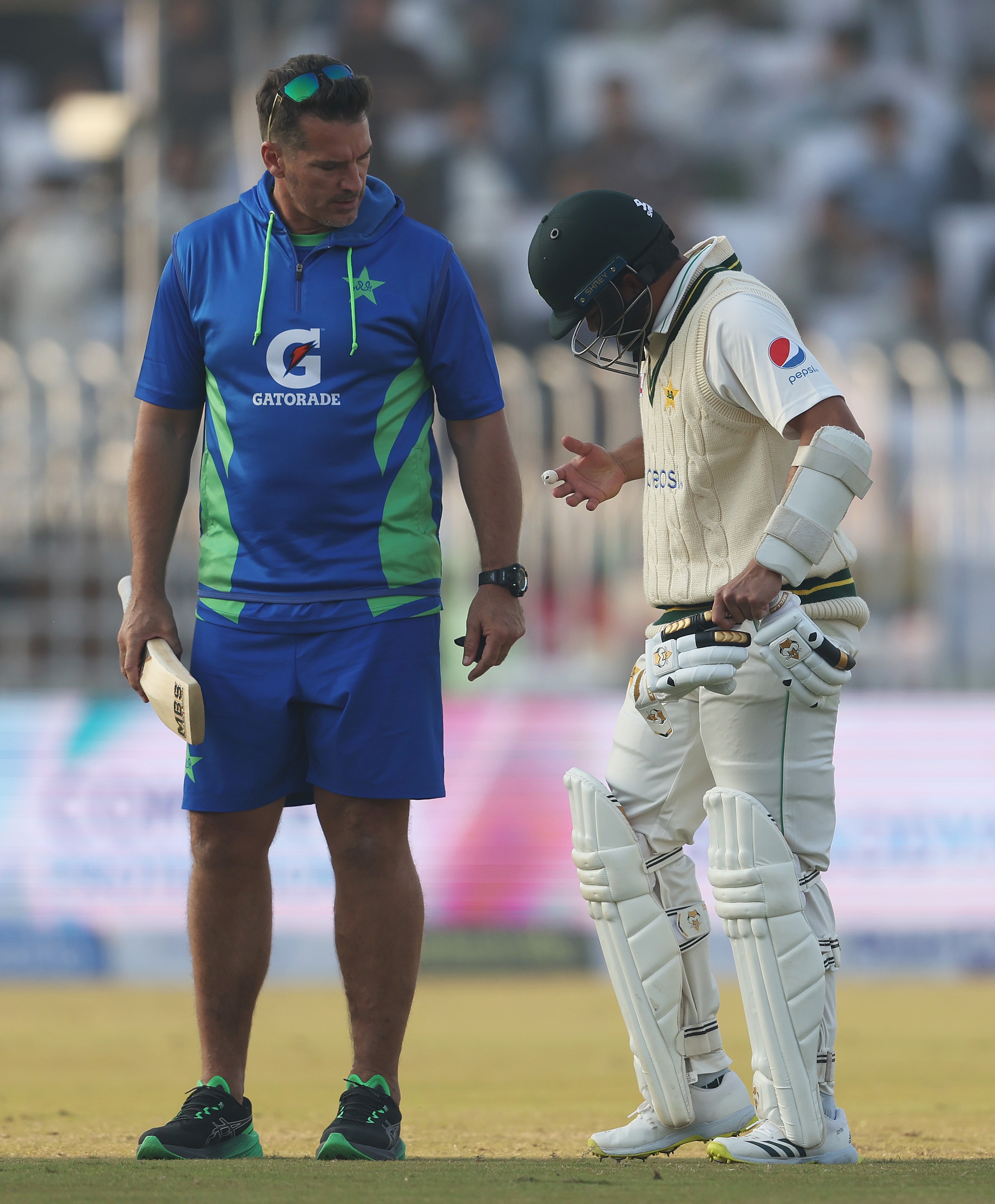 Azhar Ali retired hurt after taking a ball to his finger

Duckett, who made a century on Thursday, tried to guide his first ball towards third man and succeeded only in giving a catch to second slip.

After a couple of boundaries, Pope was caught at long leg and Zak Crawley added 50 to his first innings 122 before gloving a catch down the legside.

Crawley rubbed his arm to try to dissuade Pakistan from reviewing the original not-out decision – but DRS showed the truth.

Root reversed hit one for four. Nothing unusual in that – he struck a couple of sixes that way in the summer.

But then he took guard left-handed, connecting with a sweep shot, before reverting to his usual right-handed stance.

Root has been impish in this match. The previous day he was using the sweat from Jack Leach’s bald head to try to shine the ball.

Root departed to a top-edged sweep for 73 and Stokes was caught at short cover attempting something volcanic.

Brook hoisted his third ball over mid-wicket for six and kept going hard.

He was on course to beat Gilbert Jessop’s 76-ball record for the fastest Test century in England’s history – a figure that has been threatened several times this year.

But he was bowled by his 65th delivery for 87 on the stroke of tea and that’s when Stokes declared.

In this article:fanslove, joeroot, lefthanded